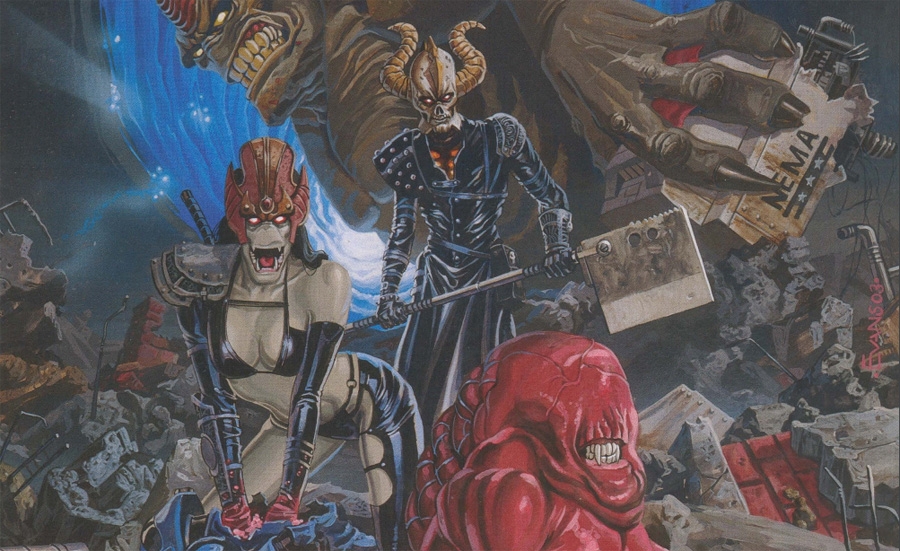 Rifts: Chaos Earth is a 2003 offshoot of Palladium’s Rifts Megaverse setting. It takes place right after the rifts appeared all over the earth and players become involved in the ensuing chaos of monsters and magic overrunning the planet. The point of the release seemed to be to make Rifts more palatable for those lame serious gamers who aren’t down with skull-headed armies of robots and blasting Mexican Dracula with a squirt gun. This was a darker, edgier Rifts involving real evil. Palladium, being Palladium, this lasted until the first hit location chart for a suit of powered armor. A sourcebook full of monsters for the setting, Creatures of Chaos, soon followed. 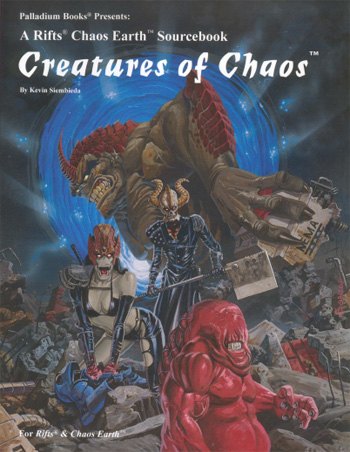 Steve: You know I’m always ready for some Rifts. When are you going to let me run a Rifts campaign?

Zack: So today’s Rifts foray is a bit different than usual. Chaos Earth is sort of the edgy version of Rifts for mature big boys, not that kiddy Rifts that everyone else has been playing.

Steve: A Chaos Oerth if you will.

Steve: Personally, I don’t think the reboot was necessary. The Rifts Megaverse is a vibrant setting perfect for gamers from ages 9 to 99.

Zack: That’s going a little too far. After about age 80 a person’s ability to see hit locations really drops off a cliff.

Steve: Someday we need to have a talk about your obsession with Rifts hit locations.

Steve: Don’t sell yourself short, dude. I bet it can handle at least 50 mega damage.

Zack: Oh, I see someone thinks he’s cut out for the Roastmaster O.C.C.

Zack: Let’s get a look at these Rifts prequel monsters…

Zack: One of Skull Stealer’s main powers is “Snake Arms” which you see in action in the picture. He can use the snake arms to attack ghosts. Why can he fight ghosts?! When would this ever happen in Rifts? I don’t remember seeing a ghost in any Rifts book.

Steve: They’re in the Rifts Conversion Book, I believe. Also he can attack astral travelers, which could be like a wizard or a psionic babe or something.

Steve: In these feminist times we live in I wanted to include a broad in the example so they know girls are included and can also astral project.

Zack: You defused that possible controversy with your feminism.

Zack: This guy gets ten fucking attacks per turn. Ten. Six for the dude and two for each of his snakes. Plus he knows magic and he’s psionic.

Zack: This is Kevin Siembieda’s idea of making a roleplaying game dark and mature: give him an evil name and make him a wizard AND psychic.

Steve: Not fair at all, dude. He got rid of all the skull robots.

Zack: Yes and as we see here the skull giveth and the skull taketh away.

Steve: Would you prefer Exalted’s idea of “mature”?

Steve: Oh, dang, I would hate to be the piercer who had to do that mouth monster’s boobs.

Steve: Is that what they’re called? Piercers?

Zack: I think the woman at the mall kiosk would prefer to be called a “piercing artist.”

Zack: Which on the rung of various self-described artists ranks right between a “sandwich artist” and Magritte.

Steve: The apple guy? What was wrong with Magritte?

Zack: Nothing wrong with Magritte, I have a very high regard for the artistry of the person who puts those hockey puck plug things in earlobes.

Steve: When I first got Netflix it had the first season of SNL and I watched a bunch of those original episodes. And for some reason they had these real long skits with Muppets doing adult jokes. And they weren’t like Kermit or Miss Piggy, they were like big furry monster alien Muppets. And they looked sort of like this thing.

Zack: I remember those.

Steve: They were about as appealing as a rotting mouth with manboobs and worm tentacles.

Zack: Probably the weirdest thing about the demons in this book is that they all have “animal vulnerabilities” where some earth animal can really fuck them up. This demon, for example, is vulnerable to a blue jay. Its talons and beak can inflict mega damage.

Zack: The kind that’s afraid if I open my back door while it’s standing on the fence a hundred feet away.

Steve: Don’t get cocky. Those blue jays will rip you apart the next time you open the door if you get your manboobs pierced.

Steve: Whoa she has a rockin’ bod.

Zack: Okay I am going to go and buy a record player and get a record and put it on the record player just to knock the needle off to make a record scratch sound.

Zack: I can’t just roll by you saying “rockin’ bod” like nothing happened.

Steve: Come on, dude, she may have an evil monkey face, but look at those abs. That is a rockin’ bod.

Steve: Can’t you picture her walking in slow-mo through some rubble with sweet guitar licks playing?

Zack: Unfortunately, I can now.

Zack: The Desecrator with the rockin’ bod can turn into a perfect duplicate of a woman if she eats the woman’s eyes, tongue, and heart. Which is a pretty gruesome and dark power. Now let’s look at what the very next power on her list:

Steve: I mean, of course. She lures them in close and then gives them the full OPTIC BLAST!

Zack: This is a serious game for adults, Steve. She uses subterfuge and seduction, spending weeks or even years to convince world leaders to blast themselves in the face with lasers.

Steve: I love this dude. He looks like he walked out of a Tool video about like a guy who smoked salvia and stuck a matchbox car up his butt or whatever Tool is always singing about.

Steve: I can imagine him busting through a wall or something and vibrating while a screw drills into a moth.

Zack: This thing looks more like a xenomorph from aliens at age 40. Most of them get wasted by colonial marines, this one got a job working for UPS, moved to a desk after driving for ten years, packed on the pounds and got a divorce.

Steve: Yeah, okay, I can imagine a little mouth shooting out of his big mouth and sadly eating a sirloin steak from a Healthy Choice.

Steve: “Why do I bother eating a Healthy Choice? I know after I finish this I’m going to eat a half a quart of ice cream.”

Zack: It says he is also known as The Crimson Slayer. Yeah, maybe in high school, buddy. Nobody is calling you that anymore.

Zack: This guy doesn’t even have eyes so no way to blast Doug from accounts, who beat him to Blake Bortles in the waiver order.

Steve: Right in the Bortles!

Zack: Yeah, I really hate this one.

Zack: Maybe this is how he washes it. Sort of dunks the proverbial donuts.

Steve: AAhhhhhhh no. I want to be done. I don’t want to think about the pube monster anymore.

Zack: He just wants to clean up his hairy balls.

Zack: He was putting up drywall all day. Got all soupy down south of the border. Feels good coolin’ the eggs off with a dip in the pool.

Steve: No, not happy, dude. NOT HAPPY.

Zack: Thanks again to all of our supporters on Patreon for making WTF, D&D possible. A new wave of backer rewards will be going out soon!