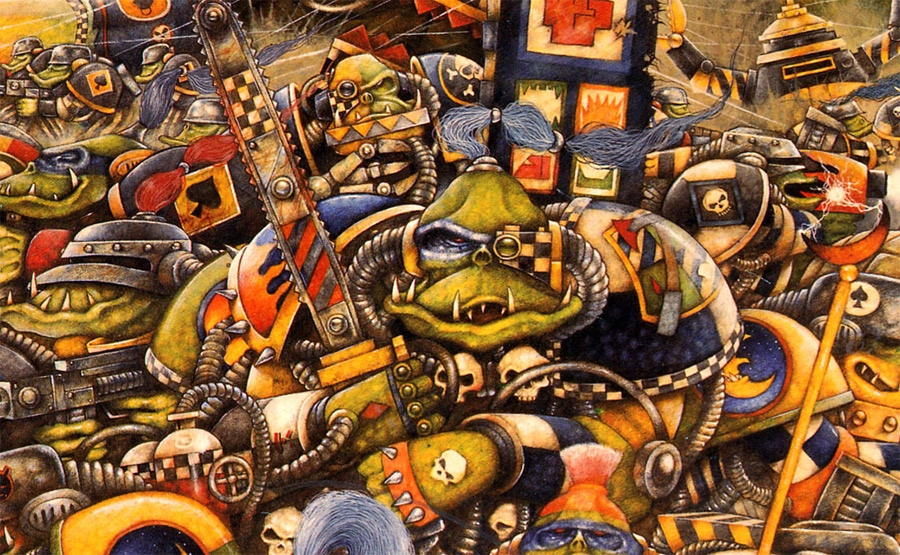 Of all the supremely weird material put out during the early Rogue Trader days of Warhammer 40,000, perhaps none is stranger or more dissonant with current lore than the original book about the space orks. Waaargh The Orks! was released in 1990 and serves as an interesting artifact of Warhammer 40,000 at its least grimdark. The book portrays orks humorously as violent idiots, a bunch of football hooligans derived from fungus, and introduces a lot of lore that has remained in the background of the 40K setting. It also delves deep into ork society and “kultur” in ways that have been mostly abandoned. Did you know orks are on a holy crusade through the galaxy? No, of course you didn’t, because like about 90% of this book it was promptly forgotten by the 40K writers.

Zack: Oh, wow, I totally forgot this book existed until I looked at the cover.

Steve: I had this.

Zack: It was one of those books I would see at the hobby shop as a kid and think looked cool but I was never that into orks and it didn’t have a lot of crunch to it.

Steve: Oh, yeah, when you’re young and limited resources crunch was all that mattered dude. You needed those sweet, sweet army lists and new rules.

Steve: But as you age, like a fine wine, you begin to desire the luxury of good fluff.

Zack: Your metaphor is horrible.

Zack: First of all, I definitely aged like a fine cheese, not wine.

Zack: And my love of “fluff” or “lore” was probably deeper as a kid. I certainly had much more time for all the bullshit. I loved that old Inquisitor novel where they end up on earth.

Steve: A galaxy-spanning tentacle entity that might be used to bring about the rebirth of the emperor or whatever was going on in that old Inquisitor novel was NOT bullshit.

Zack: Warhammer orks fluctuate wildly from pure comic relief to grimdark slaughter monsters. There are often inconsistencies between writers in 40K, but this book stands out as both a touchstone of ork information and a real anomaly of ork weirdness.

Steve: In short: this book rules.

Zack: Lots of the scrawny little orks of early 40K and an unusual focus on their way of life.

Steve: Let’s get into the weirdness, my dude. 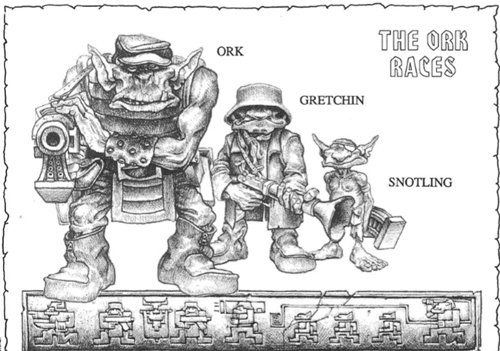 Steve: So back when this thing came out there were not very many ork miniatures.

Zack: I had a friend who had the original metal “army” box of orks. They all looked like this dude on the left.

Steve: Right, all wearing these quilted vests and samurai armor.

Zack: Skinny arms and legs, hunched over, guns with giant banana clips, which the space marines also suffered from at the time.

Steve: I think it was right after this book that they started pumping out all the weird as heck ork specialist units like the one where you teleport snotlings into enemy tanks and make them explode.

Steve: Zaps snotlings through the warp, driving them insane, and then teleports them like the creatures from critters into enemy troops or inside enemy tanks.

Zack: The things that looked like rolling severed heads that ate Billy Zane in Critters. They were called Crites.

Steve: Remember when they formed into a giant rolling ball of destruction?

Steve: Thank crap the orks don’t have that. 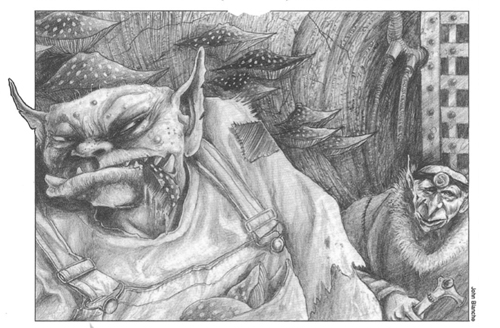 Zack: This book finally gives us the Ork: Origins story we have been craving.

Steve: Yeah, basically the orks came from the snotlings who used to be called Brainboyz and were super intelligent from eating fungus all the time. They engineered the gretchins and the orks to be their mindless labor force.

Steve: But the orks also started eating the fungus and decided they had had enough so they overthrew the snotlings.

Steve: Then the orks cut the snotlings off from the fungus and the gretchins only got a little bit so both of those species became stupider than the orks.

Zack: So humanity gets this epic saga of a lost empire, rising and falling, betrayal, living gods, cosmic battles, and orks came from eating mushrooms.

Zack: I can’t wait for the 5000 Horus Heresy novels to transition to 50 Legend of Da Brainboyz novels about the great betrayal of eating the smart mushrooms.

Steve: I would not read 50 books of that. 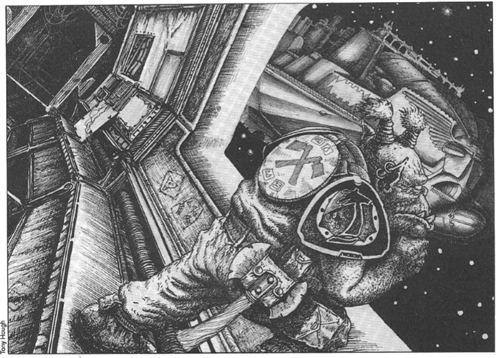 Steve: This is one of my favorite pieces of art in the book.

Steve: Based on the accompanying fiction it is literally an ork warboss contemplating the stars and how long it would take him to walk to them through the window of his ship.

Zack: I can’t do it anymore, it hurts to write like that.

Steve: This picture is part of a section on ork technology and how they have spaceships.

Zack: The how is “random chance.” They came up with super advanced technology basically by hitting pieces of metal with hammers.

Steve: Right, they developed force fields and teleporters and then when they happened to see a space hulk they would teleport to it, rig it up with rockets, and fly it to war somewhere.

Zack: Orks teleporting around and meanwhile Lubricadabrus-161 of the Omnissiah over here praying at a bottle opener trying to get it to work.

Steve: The adeptus mechanicus needs to eats some mushrooms. 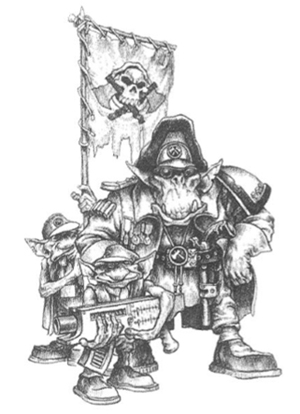 Steve: This book introduces many of the mainstays of orks going forward, like the various clans like Goffs and the idea of ork nobility called Nobz.

Steve: Sometimes they’re just thought of as the rich orks.

Zack: Rich in teeth, because that’s also a thing this book sets up.

Zack: Also some of the text is so thick with the orky cockney slang that it is difficult to read.

Zack: This might be one of the only books I’ve seen where a group of people managed to create racism against themselves.

Zack: Who as we all know subsist mainly on mushrooms and get around by teleporting into hulks.

Steve: Heck yes, those ruled. Like when they turned everything into a samurai war movie and every army had 50 different banners.

Zack: I saw enough White Dwarf magazines where every single award winning miniature was this little crappy figure with a giant elaborate banner over him.

Steve: I mean, these banners are dope, but yeah, it was out of control.

Zack: I had a friend who played Eldar and he had an Eldar banner that said “FOR THE AVATAR!”

Zack: Like, you don’t need to write that on a banner, he is right there. On fire. Walking around with your army.

Steve: Most of the Eldar banners in the books are very esoteric with an Eldar rune and some symbol like a gem or a teardrop or something.

Zack: Being sad about how they are an even more pathetic has been race than the humans who worship a guy in a wheelchair who has to be fed human souls.

Zack: The art in this book is a probably the best early 40K art you will find.

Steve: Yeah, it is dope, and it has a good sense of humor.

Zack: The designs of the orks are surprisingly consistent and lively and probably the most developed of any of that early 40K art.

Zack: And it’s just fun, which, lets face it, is something often lacking in more recent 40K products.

Steve: I mean the survival of mankind in the darkness of the far future is no laughing matter.

Zack: I don’t need to laugh, but it’s a game, could we crack a smile once in a while? 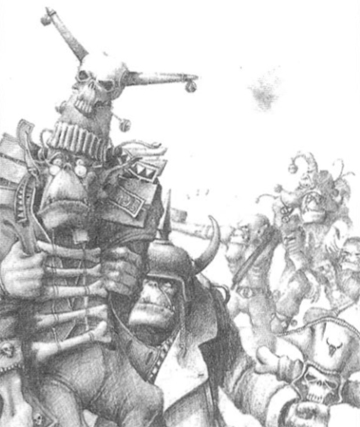 Zack: The Weirdboyz are great as a concept.

Zack: Human psykers are tormented by their connection to the warp and live in constant horror while the Weirdboyz are the most outrageous orks in the group and generally seem to be having a good time.

Steve: They might die at any moment when their head explodes but they’re orks so that’s not really unusual.

Steve: But I don’t know how good your read on them is. They’re prisoners being used like living ray guns to shoot at the enemy. They are literally carried onto the battlefield against their will.

Steve: Even their outlandish costumes are so they are easier to spot if they get loose.

Zack: On the subject of psychic orks. 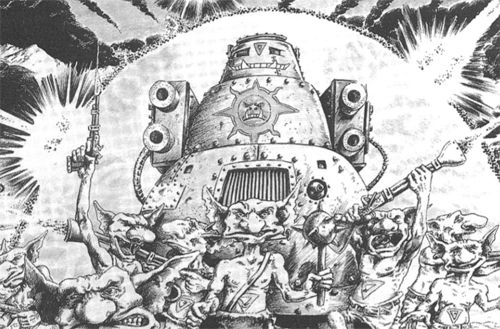 Zack: Well here is finally something that has been forgotten: ork runtbotz.

Zack: They are touched on so briefly in this it only lasts like two paragraphs, but I guess the Runtherdz also used to have robots that would go along with the gretchins and snotlings.

Steve: Not totally gone dude. Forgeworld has a mini for a runtbot.

Steve: They’re like walking forcefields to protect the snotlings until they can get into hand-to-hand range.

Zack: Forgeworld making one doesn’t mean it hasn’t been abandoned.

Zack: Unless you think I could also field like a huge bust of a commissar or a Primarch or one of the other hundreds of weird ass things Forgeworld makes.

Steve: It’s OK to admit you were wrong again.

Zack: And now I do. God bless, Steve.