Listen up, chummers! Hot on the heels of our look at the art and style of the original Shadowrun, Steve has put together some of his favorite Seattle plot hooks from years of running the shadows. Use these to drop into any Shadowrun campaign for a quick adventure or expand on them and build an amazing campaign around Steve’s fresh ideas. We’ve organized them into a random table in case you prefer to roll dice to decide your destiny. 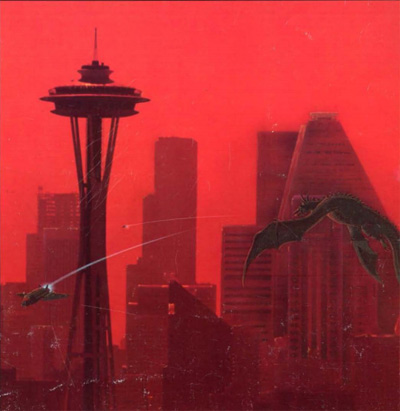 Roll a percentile die to determine your plot hook

The runners learn of an enchanted forest where the spirit realm can enter reality and that is where one of them has to go to renew their driver’s license.

A new restaurant chain, Best Beef, has opened in Seattle and spread like wildfire. The beef is delicious. It seems like something bad is happening, like maybe they’re selling human meat, but nope. It’s a really good product for a reasonable price. And the cooks are cockroaches.

Seattle’s hottest DJ is a sasquatch and he’s killing people with raves to get revenge for pollution.

This is actual art from the Seattle Sourcebook.

Dracula is back in AI form. He can hack into any system and uses bat drones to menace Seattle. With the help of an orc named Renfield, the AI is trying to activate the ominous Project L.U.C.Y.

A marketing firm is conjuring the ghosts of dead relatives of consumers and using them to haunt their former family members to buy specific products.

The runners are hired by a cyborg to tail a shady politician and record some dirt on her, but when they uncover her love affair with a treant they must decide whether to trust nature or technology.

Graffiti artists are breaking into houses and tattooing tags on sleeping victims. A rival graffiti artist pays the runners to break in after the first artist and deface their tags.

More actual art from the Seattle Sourcebook, apparently done by people who never heard of advertising design or satire.

The runners must download an AI of Sherlock Holmes into a body to help them solve an assassination-style murder, only to learn that the hit was ordered by Moriarty and they have been tricked into downloading his AI into a body, not Sherlock Holmes. [Steve Note: Adapted from an episode of Star Trek: The Next Generation, a great source of plots for any type of game.]

A hot babe simsense star needs to hire the runners to find her long lost brother. She doesn’t tell the runners, but she wants him found so she can kill him, because he’s the only person who knows she’s actually really ugly and a genie granted a wish that everyone would think she was beautiful.

A floating eye monster is running for mayor and it looks like he is going to win because everyone is afraid to debate him. The runners have to win the debate against him and make him look bad for not knowing about local issues.

A group of dwarf assassins have been bioengineered to look indistinguishable from babies. They must be stopped, but their target is in a hospital nursery.

Tribal elves are conducting a sit-in at a gun and bomb factory to protest pollution, all but stopping production on a new, bigger type of machine gun. When the gun corp hires the runners to put a stop to the protest, they discover that a rival and even more sinister gun factory is financing the protesters.

A friend of one of the runners is trapped in a virtual reality by a virus inserted into a simsense chip. It’s all part of the scheme of a dragon crime boss who wants to use networked human brains to hack into Canada’s largest bank. 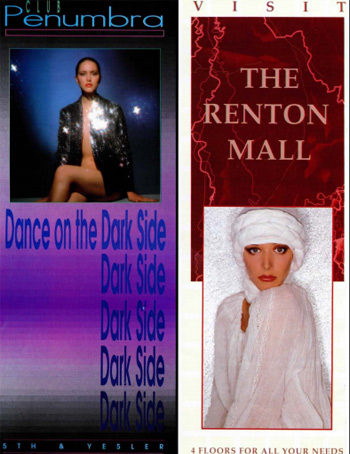 After months of drought, a powerful shaman and a popular tribal rocker are holding a concert to make it rain. A megacorp wants the concert sabotaged to sell drought-resistant crops. It turns out their own corporate shaman caused the drought.

A corporation wants a unicorn dead. A group of concerned citizens hires the runners to protect the unicorn, but it may all be a trap by the corporation to wipe out two threats at once.

A small child has climbed down into an animal enclosure at a zoo and must be rescued. It’s a people zoo run by demented metahumans and the child is a troll being threatened by captive humans. But do the zoo owners just want the runners to add to their collection? Yes. That’s what they want.

Native Americans hire the runners to investigate rumors of cowboys in the area. It turns out to be actors, a director, and crew filming a cowboy movie. But the director is a psychopath using live ammunition and he needs real Indians and lots of real blood. 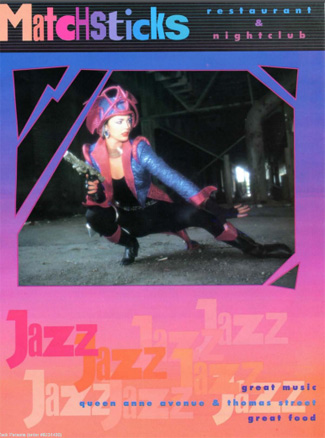 Sure. A Jazz club advertisement. Why not?

An escaped android hires the runners to get an android-hunter off her back, only the android-hunter is an android too (maybe?) and there’s a unicorn involved and a mega corporation and some robot puppets. The details depend on which version you want to play.

Simsense action star Johnny Wolf is in town to record an episode of his popular martial arts police procedural show, Kung Fu Cyber Cop, but when Johnny’s elf costar Betty Bingo is abducted by eco terrorists protesting pollution, he’s going to need the runners to use real kung fu and real cyber to get her back.

Someone was paid to make this for a printed book.

A rival team of shadowrunners challenges the group to a race to see who can steal a dragon egg from a highly secure arcology. When the runners arrive at where the egg is being held, they find the egg has been broken by the other team and they’re blamed by an angry dragon mom.

All is not as it seems when a group of eco-terrorists use arson and intimidation to cover up their illegal toxic dumping in one of Seattle’s most scenic rivers.

A decker needs to hire runners to watch his back while he gets even with the girl who put him in the friendzone.

One of the runners is secretly kidnapped and replaced with a dragon who poses as them using magic and elaborate disguises. The dragon’s intentions are mysterious, but probably not very good. [Steve Note: this is a good plot when one of your regular players is off wasting time with a girlfriend or something lame.] 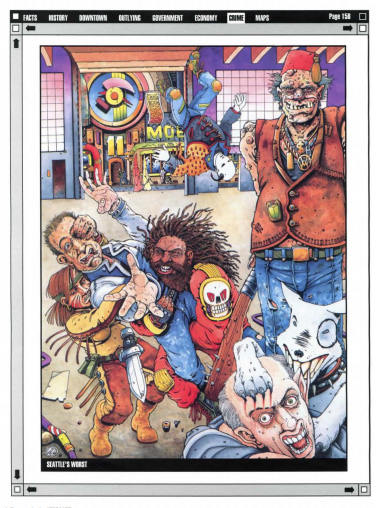