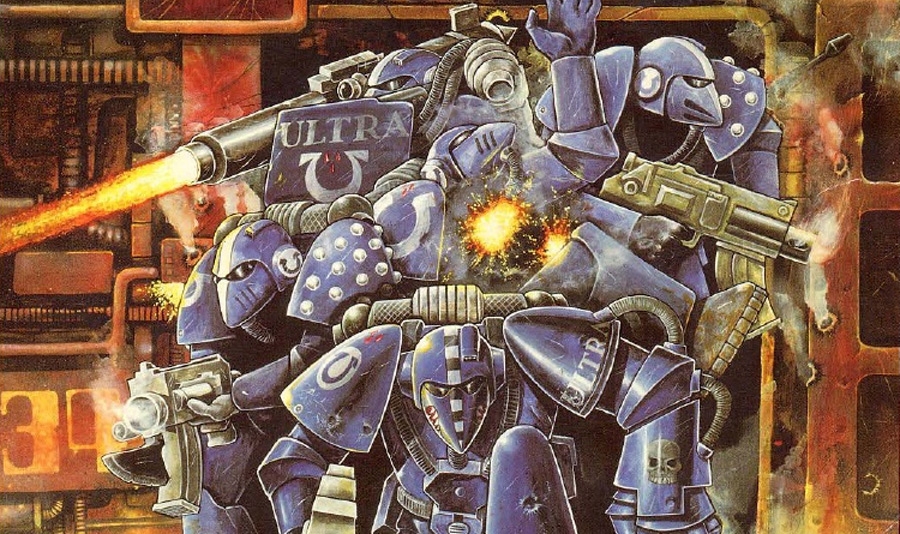 The red-covered Compendium was the first major release from Games Workshop to follow 1987’s Warhammer 40,000: Rogue Trader. The book compiled some new material with things that had previously been printed in the pages of GW’s Warhammer magazine White Dwarf. If the original rule book painted a broad portrait of a wild and intensely strange universe of war, then the Compendium began to fill in the equally weird details. The art was weird, the fluff was weird, and even the rules were weird. And gamers loved it. 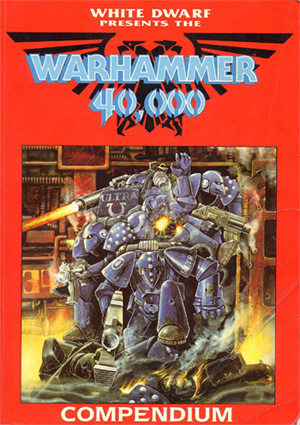 Steve: These early covers from GW of Space Marines getting blasted and holding strong really set the tone for early Warhammer.

Steve: It was this whole savage galaxy against these dudes in armor who just never give up. It’s grim and hopeless and badass too.

Zack: Very much based on the artwork that came out of the Anglo-Zulu war. Like stuff from the battle of Rorke’s Drift. Space Marines are the British and Orks are Zulus.

Steve: So it’s racist? Everything is racist with you!

Zack: I didn’t say it was racist, the original Zulu war artwork has a racial element, but I think you can remove that element if it’s orks.

Zack: Here you can’t even see the bad guys. It could be white guys in top hats shooting at the Space Marines.

Steve: Some of the chaos cultists do have pretty tall and fancy hats. 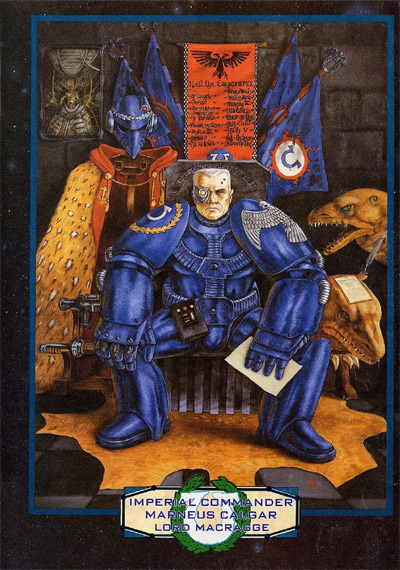 Steve: Aw, heck yeah. I remember this lazybones dude. They even made a miniature of him sitting on his throne.

Zack: It begs the question of what he’s going to do now that he has that piece of paper in his hand.

Steve: He’s like a samurai. He’s going to sign the paper on the dinosaur head and then use some cool wax seal on it and then hand it to one of his assistants. And then they’ll take it to the Tyranids to let them know that they are now at war with the Ultramarines.

Zack: There is a lot of silliness going on in this picture, but my absolute favorite detail is the upper left where there is a poster of the Emperor hanging on the wall.

Zack: Like when you go in a school and there is a picture of the current president.

Steve: Or you go into a tween girl’s room and there is a poster of Drake.

Zack: Is that something you actually know about or are you theorizing it?

Steve: I have cousins, dude. Don’t put me on any lists.

Zack: That I send to the police department. 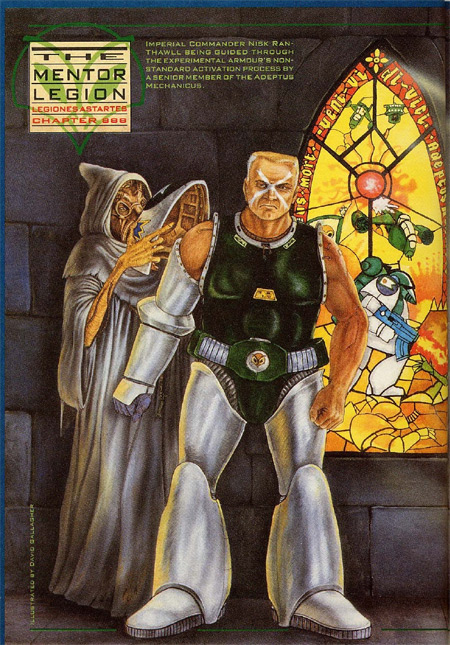 Steve: I don’t think he has ever been mentioned after this page.

Zack: You can see the start of them refining the Adeptus Mechanicus designs in this picture. In Rogue Trader they were just gross demonic looking dudes. In this one they are shriveled and sort of animal-faced with wires sticking out of their arms.

Steve: Right, and eventually they became the dudes with chainsaw arms and glowing injectors of chemicals that we all love.

Zack: You also see a real refinement of the churchiness of the Space Marines with gothic cathedrals and stained glass.

Steve: This was still back when anything could happen though. Like, yeah, sure, space marine cathedral, but then you turn the page and for no reason it’s an ork riding a dinosaur or like a mohawked cultist holding up a sign that says “DOWN WITH MARINEZ!”

Zack: My very first Space Marines back in 1991 were painted solid gold and one of the first battles I fought was against a guy using tiny-scale Napoleonic figures with the alien creator rules in Rogue Trader. And it was fun.

Zack: I think if you tried either of those things today GW has the legal authority to put you in one of those British castle jails.

Steve: Yeah but have you seen the Imperial Knights? They’re huge and they cost $150! Which is cool! 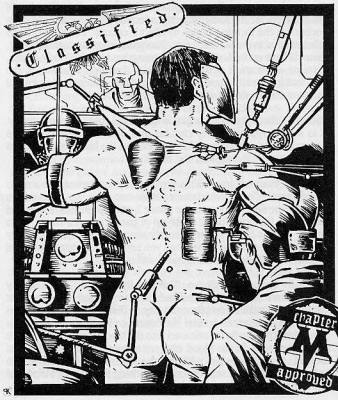 Zack: A little Space Marine butt for the ladies.

Steve: Space Marine indoctrination procedure was one of the big additions of this book. It’s cool, introducing the idea of the gene seed, also called the progenoid glands, which are these two lumps of genetic material in ever marine that came from the Primarch’s DNA, along with 18 additional organs they put into marines.

Zack: Yes, when Vanilla Ice made “Cool as Ice” he means “Cool as the 19 organs surgically inserted into Space Marines.”

Steve: Easy, dude. I want the Betcher’s Gland. It lets a marine spit a blinding poison so acidic it will melt through steel bars and allow him to escape jail cells!

Zack: That’s pretty great, especially because it sound useful in combat and yet there were never any rules for it and it is basically never mentioned again.

Steve: What about you?

Zack: I really like #8 the Omophagea, which allows marines to eat parts of fallen enemies to gain some of their memories. Except I would just remember being on horrible farms a lot unless I turned into a cannibal, so I am going with #16.

Zack: Yeah, yuck, but you would never lose wrestling if you were covered in your own slime.

Steve: How often do you wrestle people, dude?

Zack: But I don’t have a Mucranoid.

Steve: I’m really bothered by the fact that it’s in the colon. Space Marines must stink so bad. 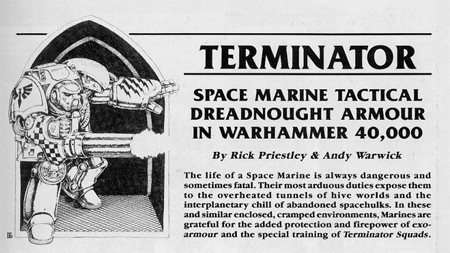 Steve: Hands down the coolest thing introduced in the book.

Zack: 12 year old me agrees. I bought the very first box set of these that came out. I’m talking very, very first. I can’t even find a picture of it in google image. I opened it up and was blown away by the commander figure and I gave him the minigun arm and the cool sword arm.

Zack: Yes, I mean, I was a kid and this box of miniatures was 40 dollars. That’s a lot of money. And then my friend told me, “Uhhh, the captain can’t have an assault cannon and a sword.”

Zack: And that moment was the beginning of the decline for me. From the anything-goes craziness of Rogue Trader to the specific expensive miniatures that must match up to inflexible rules lists.

Steve: So what you’re telling me is you stopped playing Warhammer before it became fun and good?

Zack: I am a member of the horrible ultimate graybeard Zoats 4 Life crew. 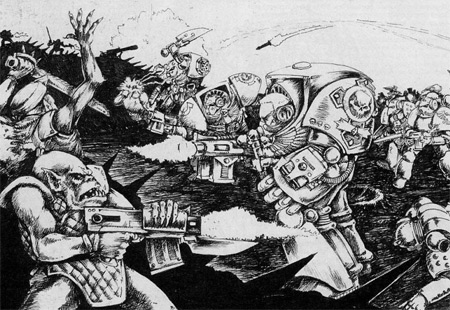 Steve: You know what the second coolest thing this book introduced was?

Steve: No, dude, storm bolters! It’s like a bolter, but twice.

Steve: Rogue trader was like, “Yo, there are these sick powerful guns called bolters that basically shoot armor-piercing exploding rockets.”

Steve: And then in the Compendium they were like, “Yeah, but you know what? Double that. Now what, orks?”

Zack: There was a time when Terminators were actually one of the very toughest things in Warhammer. Now I’m sure they’re pushovers due to the constant need to sell bigger and bigger miniatures.

Steve: They’re still pretty cool, but yeah, there is a lot of stuff that can kill them. 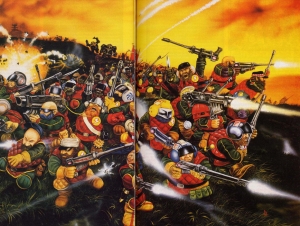 Zack: One of the flaws in trying to transform everything from Warhammer Fantasy into 40K were the Squats.

Steve: Some jerk once told me this art was inspired by art from the British fighting the Zulus. And it was implied that I was a racist.

Steve: Oh, wait, that was you. The guy who doesn’t think Squats are cool.

Zack: Warhammer’s transition was one from semi-seriousness to total, glowering, hooded, brooding super-seriousness. An entire army of roly poly fat dwarfs was doomed to be stricken.

Steve: Weren’t you the one just telling me how it was all down hill after Rogue Trader?

Zack: Well, this is technically after Rogue Trader that the Squats were fully introduced. But you make a fair point. I liked freewheeling and yet always disliked the Squats.

Zack: Maybe they shouldn’t have died.

Steve: If it makes you feel any better, they’ve gone from saying the Squats were completely wiped out by Tyranids to bringing them back in the background as the Tau’s buddies the Demiurg. They’re all about like mining and robots and live in space instead of on high gravity planets.

Zack: None of that makes me feel any better. 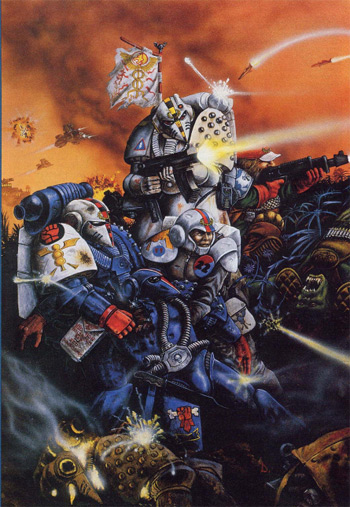 Zack: Ahhhh I love this picture for the Imperial Guardsman pulling the wounded Space Marine.

Steve: And the Squat.

Steve: Also that big medic banner. There was that phase 40K went through where they were NUTS about banners. Just tons of them everywhere instead of HQ units only.

Zack: That’s another British thing. I’ve watched enough Sharpe’s Rifles to know how obsessed the British military are with their banners.

Steve: But also sort of samurai too because they wore them on their backpacks. Even the eldar had a whole bunch.

Zack: Sometimes they had stupid messages written on them.

Steve: Yeah, those are the ones they’ve really gotten rid of. Now they’re just the flags. 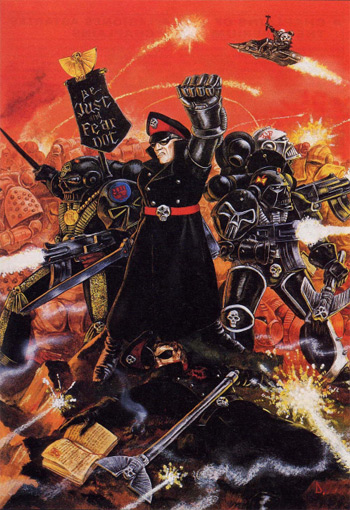 Zack: Ohhh ahah my god, Steve. STEVE! I can’t handle how much I love this picture.

Zack: This is early days Warhammer 40K in one goofy ass image.

Zack: Clearly they thought it was cool too.

Steve: It’s really freaking me out that the Commissar is taller than the Space Marines.

Zack: I know the metal band Bolt Thrower used a fair amount of Warhammer stuff as cover art. I am going to check and I pray to god they used this.

Steve: Their loss. Totally their loss. 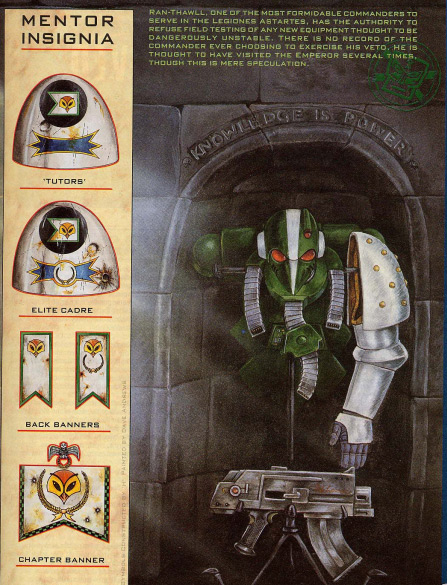 Zack: There’s so much good stuff in this book I feel like we have to revisit it.

Steve: Let’s do it again, we haven’t even gotten to the Eldar space clowns, the robots, or some of the hilarious miniature conversions.

Zack: Yeah, we’re coming back for a part two. I clearly remember a deodorant stick being used to make a vehicle.

Zack: See you soon with more of this, folks!