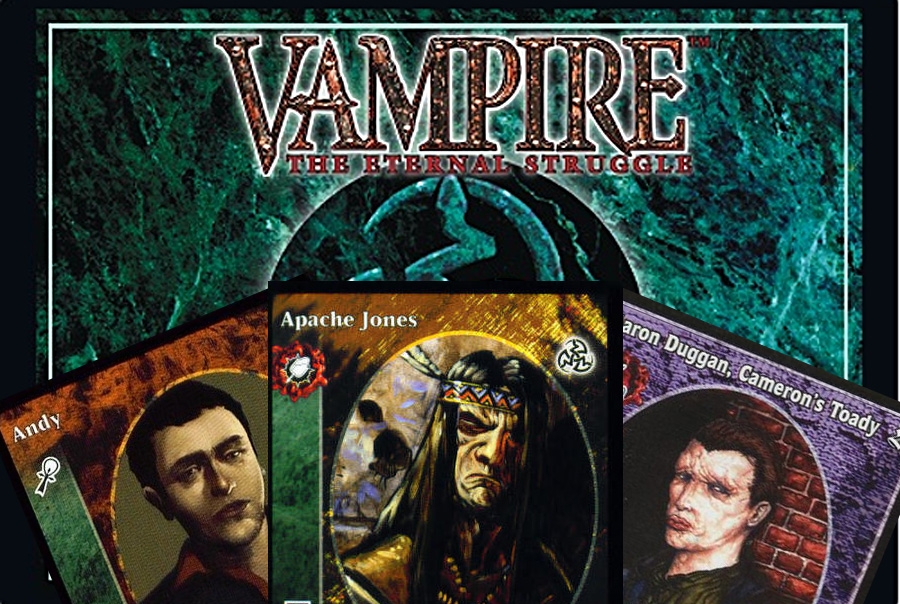 Vampire: The Eternal Struggle is a collectible card game from White Wolf based on their popular tabletop game Vampire: The Masquerade. The card game began life in 1994 as Jyhad, but quickly changed names to prevent people from confusing it with the Islamic term Jihad. The game was created by Richard Garfield, creator of Magic: The Gathering, and was one of the more successful games to emerge from the CCG craze of the mid-1990s. Expansions are still being produced for Vampire: The Eternal Struggle as of 2016’s Anarchs Unbound. The game’s success has not made it any less goofy.

Zack: I had a deck of this for a couple months in 1994. Interesting game, not nearly as fun as Magic and clearly a product of peak goth of the 90s.

Steve: I was more of a Rage guy myself. I mean, in general, vampires are cool, they are sexy or whatever, but werewolves are the ultimate badasses.

Zack: Vampirism is a disease you catch from like a sexy lady or guy in leather in a creepy night club and lycanthropy is what you get when a wolf bites you in the woods. I think I’ll take the STD metaphor over the rabies metaphor.

Steve: Yeah, but dude, werewolves were like cool with being werewolves. Vampires always had this tortured double standard. Like here is this book about all of our badass powers and our cool secret societies but also we hate it and we wish we weren’t vampires. Cry me a river, you babies.

Zack: Not all of the vampires were like that, but point taken.

Zack: Let’s get into the many interesting vampires we found hiding in Jyhad! 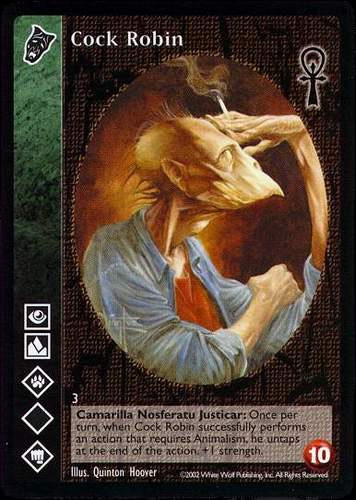 Steve: Okay, the name is a little silly, but this one is honestly scary.

Zack: Yes, smoking should not be promoted in a game for teenagers.

Steve: No, I mean, imagine a human-sized baby bird that ate human blood. That is basically this dude. I get it “Cock” ha ha but I would not be laughing if this dude wanted to bum a smoke.

Zack: Yes, because smoking is bad for you, Steve. Why do you have cigarettes? 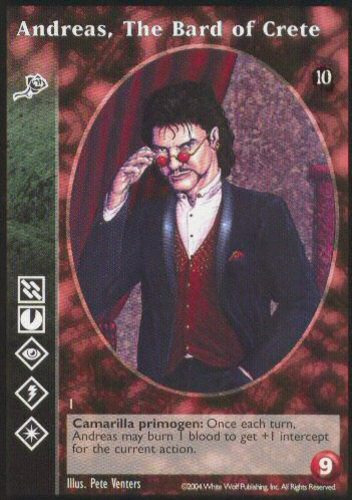 Zack: *sidling up to one of the maids of honor at his cousin Nick’s wedding* “Hello, I am Andreas, but they call me… the bard of Crete.”

Steve: Yeah, I was thinking more like 1990s prom wear.

Steve: Or maybe an extra from Wild Wild West.

Zack: Or the boyz in a Boyz II Men video.

Steve: I just had a flashback to those two years in the 90s when everybody wore tiny sunglasses. It was right after the huge bug-eye sunglasses stopped being a thing. 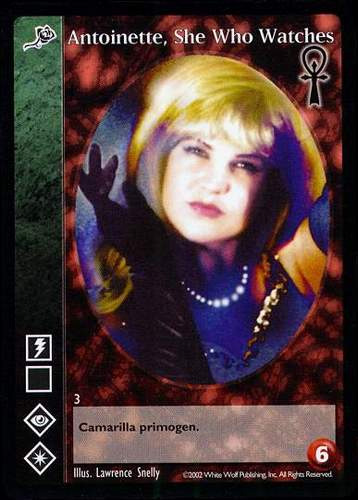 Steve: I feel like Antoinette is trying to sell me some jewelry or gloves or something.

Zack: The Justicar of QVC.

Zack: Or maybe someone who would have been an Internet trend in the pre-Youtube era. Like Landover Baptist or that lady who would wear gold costumes and big glasses and dance. I can’t even remember her name.

Zack: No, whatever is the opposite of Nicki Minaj.

Steve: That giant guy from It Follows?

Zack: Yes, Antoinette reminds me of the giant from It Follows. 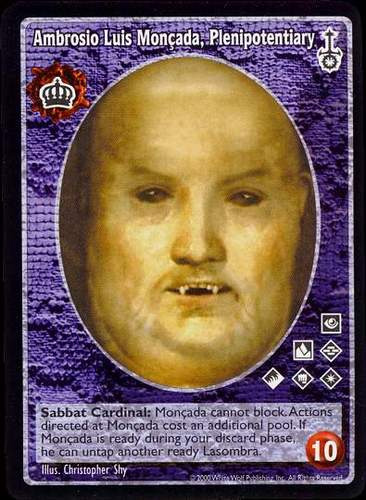 Zack: Yes, my name is Prince Percy Philomenthus Pituitary Polarch and I am a thumb.

Zack: I’m going to go back to the cigarettes here, Steve. Hot dogs are evil by their very nature.

Steve: Now we’re getting into Rage stuff, dude. Pentex and the idea that there are corporations intentionally corrupting nature and mankind for like umbral evil purposes. Pentex would make hot dogs.

Zack: If only Oscar Mayer had “umbral evil” as an excuse for their turkey dogs. 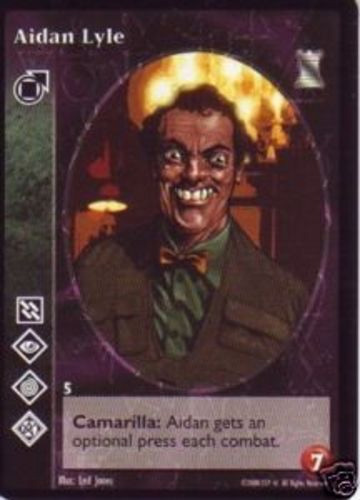 Zack: Introducing the creepy ass idea: what if vampires just had big teeth rather than fangs. Huge, blunt cow teeth.

Zack: Biting you on your fucking neck.

Steve: Oh, no, they are way less sexy.

Steve: I’m praying for the Lycans to rise.

Zack: Yeah, sure, right up until you realize the Lycans are lycanthropic horses.

Zack: Says a man who has never been around horses. They bite the shit out of people. It’s like getting your arm shut in a car door. And then you turn into a half-human/half-horse and I don’t mean that in the fun way like a centaur. 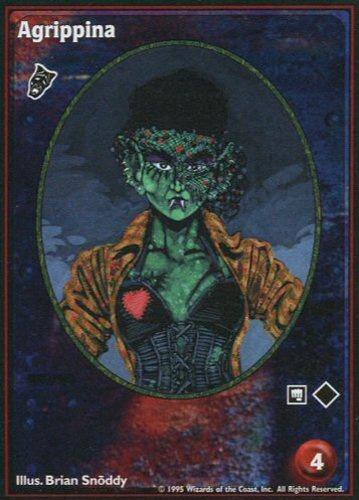 Steve: The veil is not quite doing the trick.

Zack: At least now I know what a goblin looks like in a corset.

Steve: Would you still have sex with her?

Zack: Uh, Steve, I don’t treat women like objects where I need to assess each beautiful, unique woman on whether or not I want to have sex with her.

Zack: Also, no, she has numerous ear piercings and that usually means crazy. 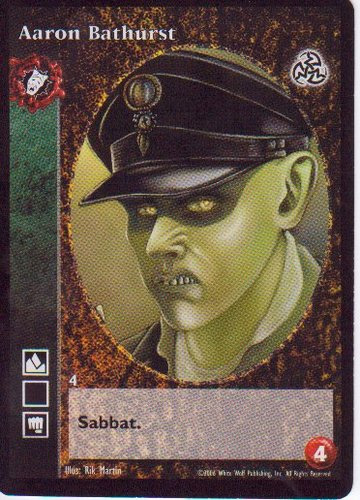 Zack: “Why, I do declare! Aaron Bathurst? Of the Transylvania Bathursts?”

Steve: Maybe it’s the misspelling of a trade name. Like his family is known for Hurting Bats.

Zack: Does this guy look like he hurts bats?

Zack: He helps them. 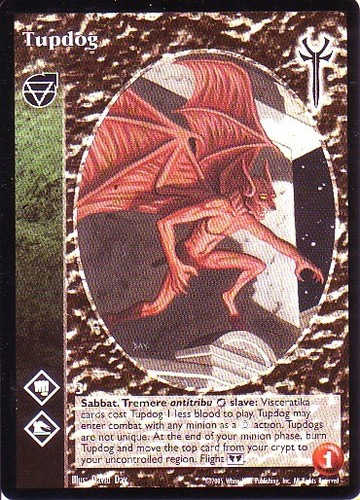 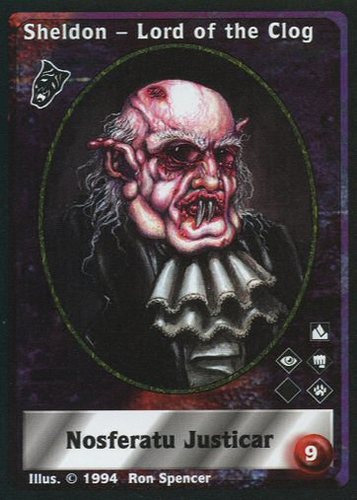 Zack: “Oof, I am going to wedge one in the drain here in a minute. Good old Sheldon is going to plug it up good, I am. Been eating string cheese and opiates all day. This thing is going to be like a brown sock full of dried Play Doh.”

Steve: At least he takes pride in what he does.

Zack: He is a landed nobleman of the clog, not some mere peasant of the clog who perhaps plugs a sink with hair.

Steve: Oh, for sure Sheldon does it well. He is sealing up toilets forever. Bazinga.

Zack: Steve, you are going to jail now. 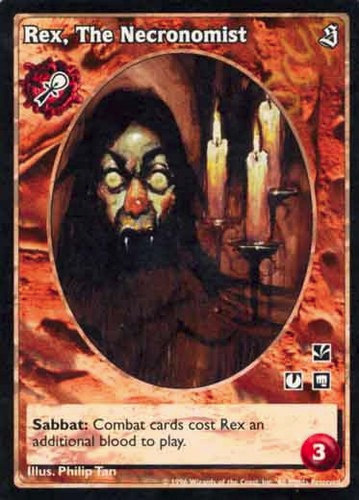 Zack: Necronomist? You know Rex works for Club for Growth.

Steve: I don’t know what that is.

Steve: Is that a direct quote?

Zack: Paraphrased. I’m sure it’s in one of their whitepapers. 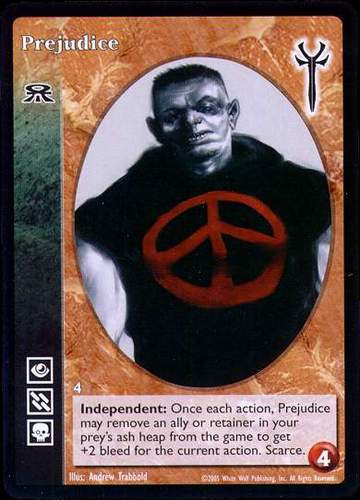 Steve: Oh, yeah, this was the 1990s, when a large number of white people were finally looking around and saying, “Uh… maybe racism is actually bad?”

Zack: We’re still not sure about that. It might be good.

Steve: I like Bill Maher’s weekly Asian driver jokes. Is that racism?

Zack: No, you can’t be racist against Asians. That’s not one of the racisms. 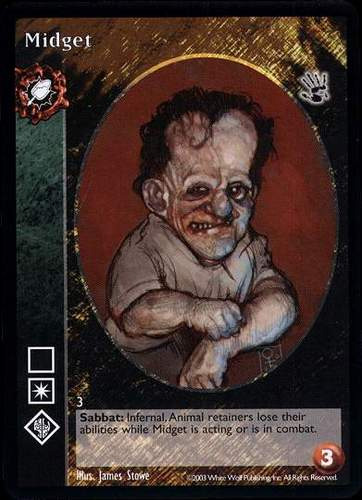 Zack: Yeah, this guy gets no breaks. He’s a little person, he has a horrifying face, and his name is Midget.

Zack: On the plus side, he can probably turn into a bat.

Steve: I wonder if it’s a normal sized, handsome bat.

Zack: One of the ones Aaron is helping. 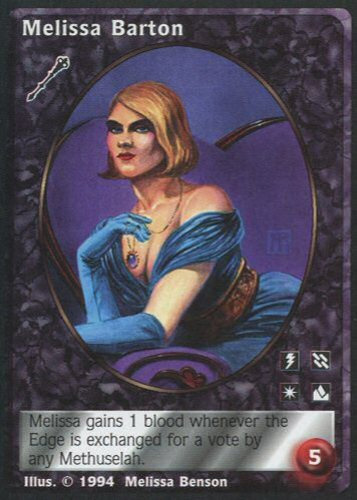 Steve: I want to make jokes about this one, but I’m afraid to do it.

Zack: That’s called your conscience, Steve. It’s warning you not to mention Melissa’s resemblance to Michael Pitt in a blue velvet dress.

Steve: Oh, so this is like in the 1990’s when we realized racism was bad, only about people who look like Michael Pitt wearing a dress?

Zack: Yes, but careful, you are getting dangerously close to making a joke about it.

Zack: Let’s just say we both support Melissa Barton and hope she is very happy drinking human blood, regardless of that blood’s gender. 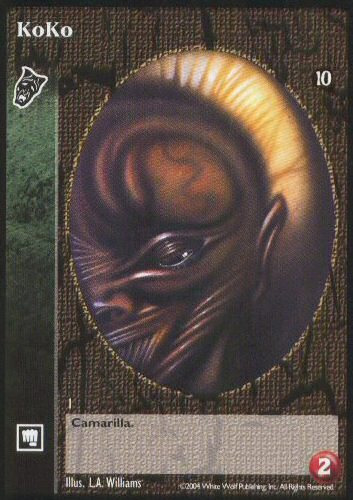 Steve: “We never should have taught it sign language!”

Steve: Also is it just me or does that thing look like it is @drill smiling? 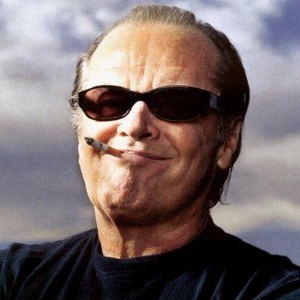 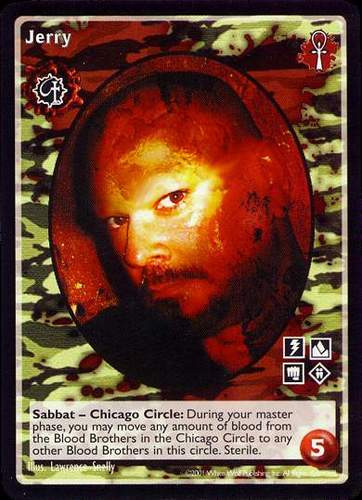 Steve: Nice. You’ve got KoKo and Prince Plutarch the Pieronymous and the Necronomist Rex and then…

Zack: I remember him from the episode where Jerry decides to commit Diablerie on Uncle Leo and Newman is the Justicar who has to hunt him down.

Steve: Newman was definitely Tzimisce. No way was he in the Camarilla.

Zack: Alright, J. Peterman, the prince, sends the sheriff to hunt him down.

Steve: It checks out. 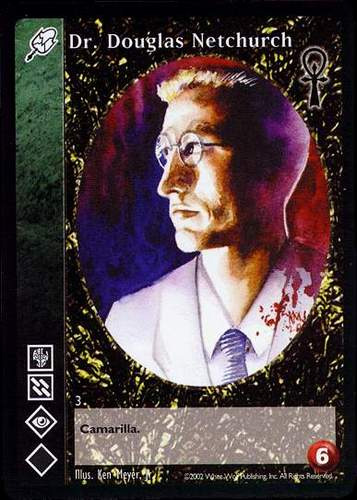 Steve: The absolute last doctor you want to hear paged over the hospital intercom.

Zack: “Paging Doctor Netchurch, please report to the printer. We are almost out of toner.”

Steve: The cyber vampire doctor priest. Pick one job and get good at it, dude.

Zack: Vampire is technically not a job.

Steve: Yeah, right, and Muslim is not a race. MAGA, dude. 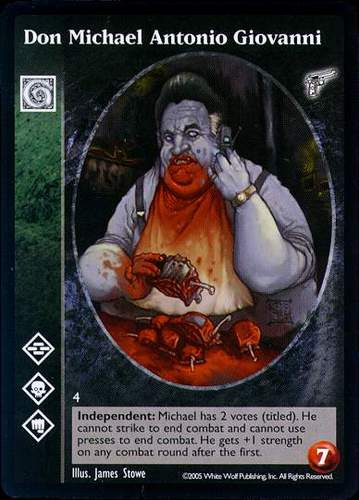 Steve: At a certain point you are no longer a vampire, you are some sort of cannibal. 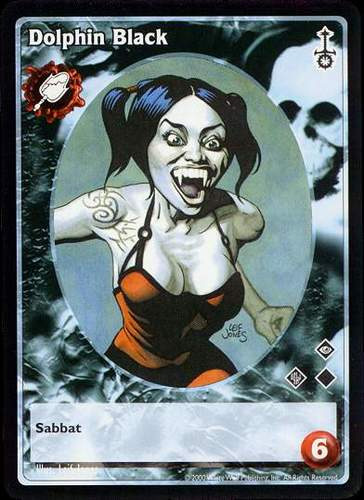 Steve: Entertainment Weekly described this show as “mind bending” and a “tour de force” but I didn’t know it was about vampires.

Zack: What the fuck is Entertainment Weekly? 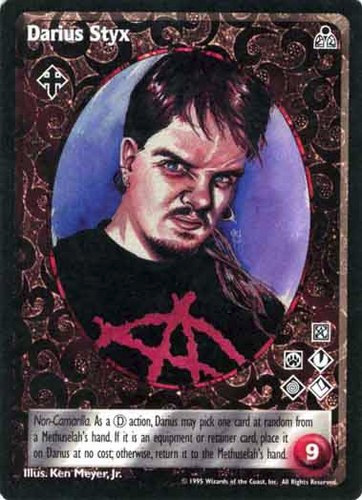 Zack: What I picture every Vampire: The Masquerade player looking like.

Steve: There is also the fat guy in black jean shorts and the skinny pale girl who really just wants to play Changeling.

Zack: You’re talking about Keith and his girlfriend, aren’t you?

Steve: I don’t want to get into it, but Keith and I have had a bit of a falling out.

Zack: Oh, no! I hope it wasn’t about his girlfriend!

Steve: Actually, she is his fiancee. And no, it’s not about her, it’s about what happened to my steel dice set that I had at his house and it has gone missing.

Zack: That sounds like a mystery for NEXT TIIIME!

Steve: Thanks for supporting us on Patreon! Please keep us going and free of ads!