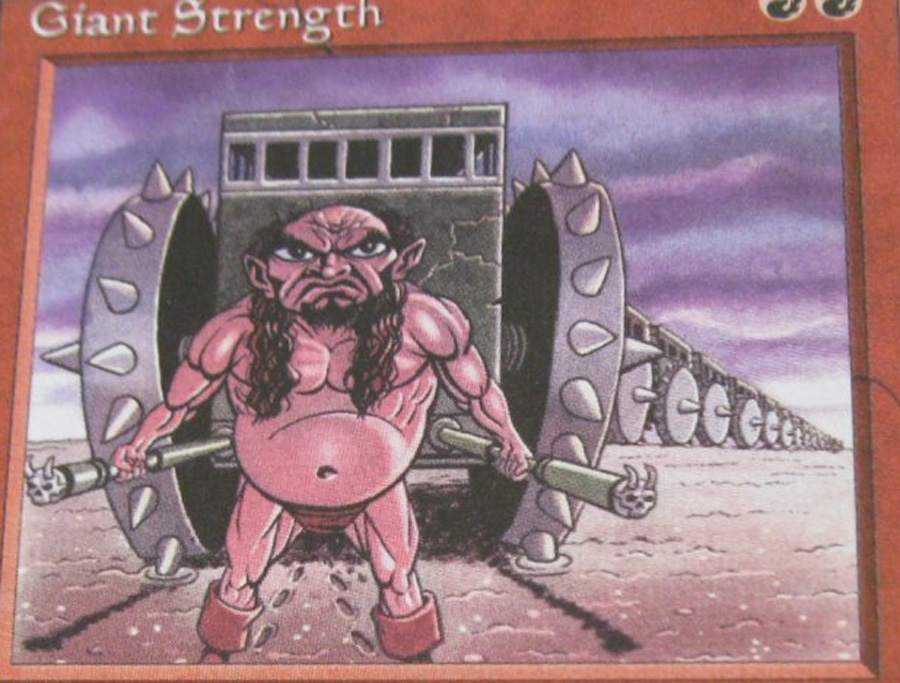 When it was released in 1994, Legends was a capital letters Big Deal. Legends was the first Magic: The Gathering series to be released in 15-card booster packs and the first 300+ card “full” set rather than the shorter sets like Antiquities and Arabian Nights. It also introduced the multi-colored Legends cards and mechanics like poison counters that would become a mainstay of the game. Legends was almost universally well-received and continues to be well-regarded. Despite the reputation, it is not without its early-Magic goofiness. Join us on a journey through a selection from this massive collection of Magic cards.

Steve: I bought so many packs of this. Seriously, I think I had a whole one of those long cardboard card boxes full of Legends cards.

Zack: I looked up the prices on them and they are worth a fortune.

Zack: How Magic cards have retained so much value I will never understand.

Steve: Oh, I traded all mine in long ago for credit at a hobby shop to buy more RPG books and paints.

Zack: I wouldn’t worry too much. We’re all going to be boiling alive in the vapor storm from the rad desert or getting eaten by cannibals by the time we retire.

Steve: Such a pessimist.

Steve: By the time I’m 65 I’m going to be on the holodeck kissing Marilyn Monroe. 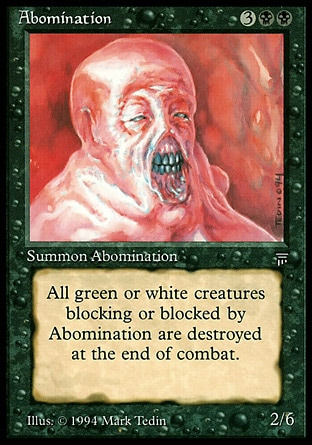 Zack: This guy definitely has a Tinder picture that looks like somebody from One Direction.

Steve: Any time I see a van with tinted windows I imagine somebody like this driving it.

Zack: Oh, I think we’re talking about the same guy.

Zack: Known to police as the Houston Craigslist Cenobite.

Steve: I went on Craigslist Casual Encounters once to see what the dating stuff was about.

Steve: There was one option that was like M4WW.

Steve: So it’s a guy on the Internet looking for two single ladies. Do you think that hookup has ever happened from Craigslist?

Zack: Making that clacking teeth sound as you are dragged into their van. 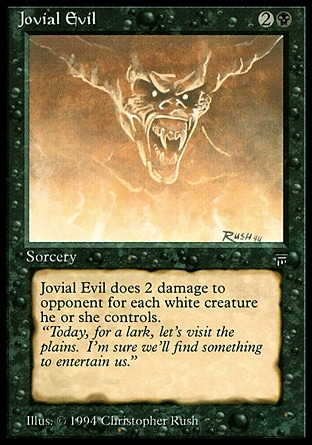 Steve: He doesn’t really look all that jovial.

Zack: “Hey there everybody I was just summoned so I cannot attack this round.”

Steve: *Heckler from the back* “Counterspell!”

Zack: “So, uh, anybody ever notice that uh, creatures with plainswalk, I mean, uh, it’s just a plain. That’s like the optimal walking environment for everything, so why do they get some special way to move. Is what I’m wondering. Anybody?” 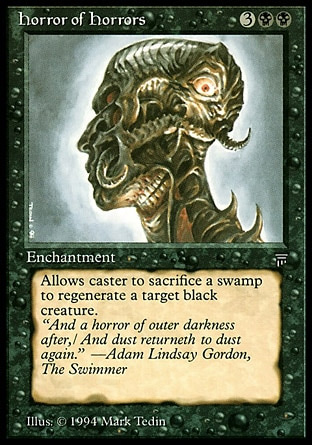 Zack: We’re not going to cover the good stuff too much, but Legends features some really cool Lovecraftian/horror artwork.

Steve: The 7/7 Cosmic Horror monster was MY dude. I built decks around him.

Zack: I built a deck over a treestump once and got termites in the deck.

Zack: I ended up tearing the whole thing deck up and had to hire a guy to dig the stump out.

Steve: Sounds like property damage is the real cosmic horror. 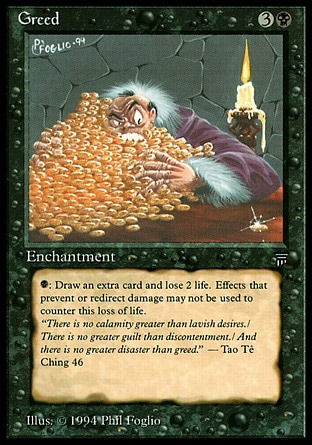 Steve: I like his art but it is a poor fit for Magic.

Zack: After he got cut loose he went on to make XXXenophile, a collectible card game about fucking.

Zack: As far as I know he is not in jail. 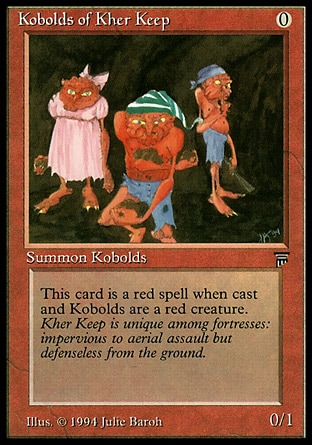 Steve: All the kobold art is goofy.

Zack: The Kobold Drill Sergeant has a picture of a WW2 drill sergeant only it’s a Kobold.

Zack:But at the same time, art like this and art like Phil Foglio’s are what gave Magic a lot of its vibe to me.

Steve: Totally. They smoothed off all the rough edges with awesome artists and lost something when they got rid of the weirdos.

Zack: It’s fine. They could all go make space vibrators for XXXenophile. 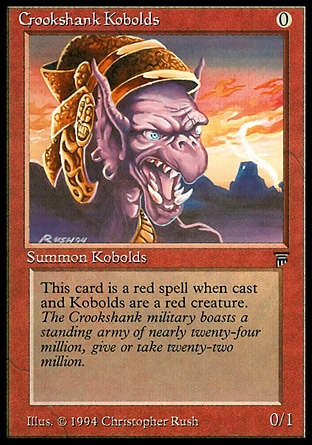 Zack: He got on that rock.

Zack: Messed him up.

Steve: Actually it might be what the baby from Dinosaurs grew up to be.

Zack: “You had better be the mama or you are fixing to get blasted, fool.”

Steve: You are usually the one to point this out, but your Dinosaur baby is sounding a little too “urban.”

Zack: Eh, don’t worry about it, Steve. Racism is good again in America.

Zack: I’m imagining the instructions to the artist on this one were, “Create the most boring monument possible.”

Steve: The tomb of the wizard Jon Smith.

Zack: He lived a humble life and accomplished little.

Steve: His magic was mostly based around trying to create a better type of parchment.

Zack: And he failed.

Steve: So we honor him with this… over there… that thing.

Zack: Pay your respects or not. Whatever.

Steve: You want to talk about artist’s instructions?

Zack: It looped all the way around and turned into a ginger pimp.

Steve: Somewhere in Boston there is one really offended guy with an incredible mustache. 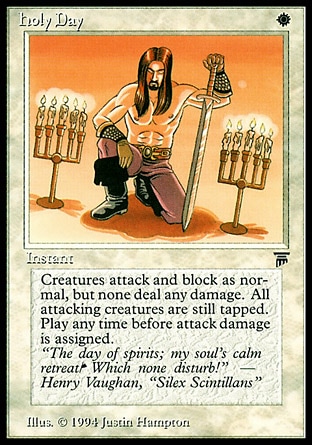 Steve: You know he wanted 12-foot tall Candlehenges for his concert. But he wrote 12″.

Zack: This is what backstage at every Danzig concert used to look like.

Steve: A bunch of shirtless guys with swords?

Zack: It was Danzig practicing swinging a broadsword. When he got tired he would collapse to his knees and thank a werewolf or something. Now his backstage concerts are like him with his feet in epsom salt while he watches Fox News and drinks a Coke Zero.

Zack: Congratulations. You found a picture of me.

Steve: Are we sure this isn’t a XXXenophile card?

Zack: It doesn’t have a pun or nonsense name, so we’re clear.

Steve: Just saying, I don’t like looking at this picture.

Zack: It’s no evening on the holodeck with Marilyn Monroe. 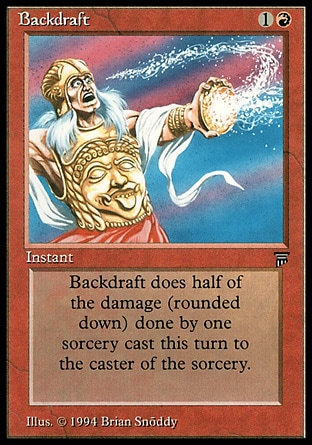 Zack: You did it to yourself, buddy.

Zack: Says right here in the OSHA manual that you need to wear a filter mask when wielding staves, amulets, or projecting gems.

Steve: Hell of a lawsuit though.

Zack: Oh, yeah, for sure. Bill breathed in too much wand dust and caught the Mesothelioma and he walked away rich.

Steve: Has to breathe through a brass beetle now though.

Zack: Company pays for it. Two colorless mana per turn.

Steve: But at least the lawsuit set them up with a dragon.

Zack: Yep. Put his kids through college with that thing.

Steve: I could tell. You weren’t cleaving through enemies with the same gusto.

Zack: I get done berserking and I don’t have the energy to spend time with my family.

Steve: Same. Just punch out, wipe the blood off my face and “Timber!” right into the bed.

Zack: What we need is a union.

Zack: Cut to Slaughterbeard’s war wagon with the berserker’s heads impaled on spikes. 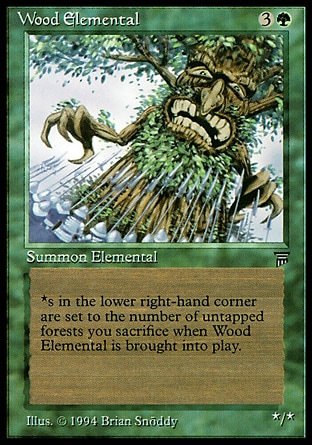 Zack: Seems silly, but the concept of trees having teeth is horrifying.

Steve: They would bite the hell out us for everything we have done to them.

Zack: “You make… houses out of us? You tap us for our blood?”

Steve: Only the Maples!

Zack: Treants would fuck us up so bad.

Steve: Thank goodness we have hunted them to extinction.

Zack: That is there one weakness: extremely easy to hunt down since they are in the same spot they have been in for the last 300 years. 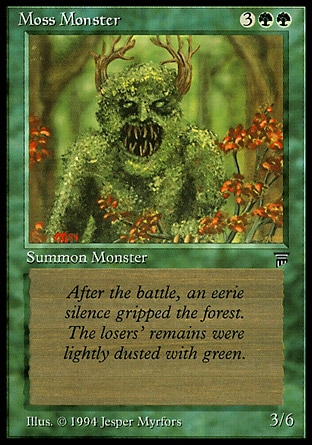 Steve: What I am gathering is that the forest really needs better dental hygiene.

Zack: This is what happens when you eat a bunch of sunlight and don’t brush your teeth.

Zack: There have been so many Magic cards I suspect this one actually exists.

Steve: There has definitely been a dentist of some sort.

Zack: OK I Googled it and it isn’t a real card but it exists: 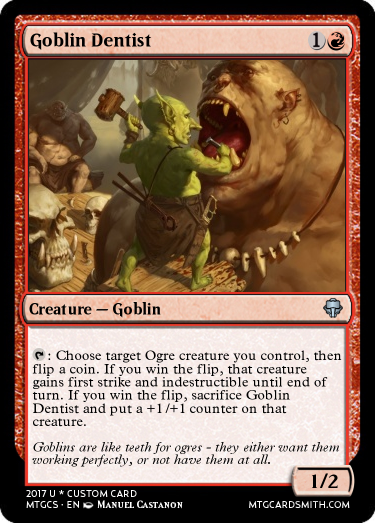 Steve: I will assume I brought that into existence through sheer willpower.

Zack: This guy totally interrupts an employee explaining store policy with, “Ehhhhh-I need to speak with your manager.”

Steve: The Wizard Who Will Argue About Suing Burger King From His Car at the Drive Through.

Zack: Can we blame him? Capitalism is violence.

Steve: Tap capitalism to tap an opponent’s lands and add a +1/+1 counter to any black creature. 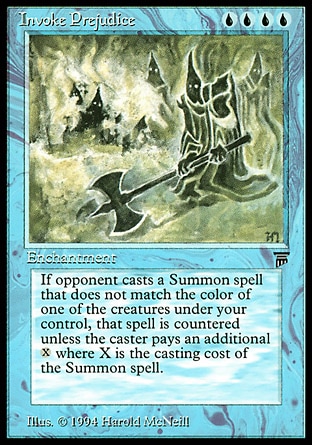 Zack: It’s a trick card that causes damage to the caster.

Zack: Because as we all know the only REAL prejudice is REVERSE prejudice.

Steve: Is that where you’re racist against yourself?

Zack: And then you say “cuck” all the time online.

Zack: And vote to have your own healthcare taken away. 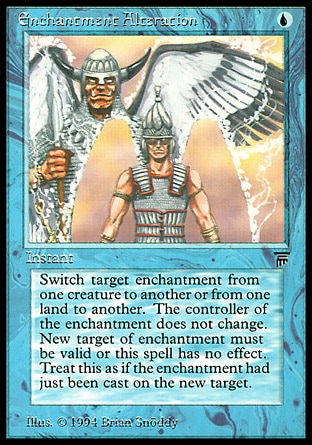 Steve: Do not attempt to enchant me or my son ever again!

Zack: I think this is how my cousin got Netflix at college.

Zack: Only he cast it on my uncle’s password recovery email.

Zack: Everyone has their vice. Some people like cigarettes or booze, my cousin just had to see Samurai Gourmet.

Steve: Understandable that old dude rules. I wish I had a magic samurai telling me to eat more.

Steve: Instead I just have nobody and I eat more anyway.

Zack: Maybe… you are the samurai?

Steve: Heck yeah that samurai would go to town on White Castles.

Zack: Only if the shogun demands it. 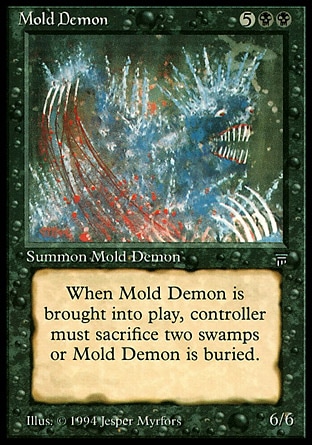 Zack: “You think I’m called ‘monster’ because of cookies? No, it’s what happens when you don’t give them to me.”

Steve: Fortunately for us we live in a wold where plates of easily-crumbled cookies are on almost every table.

Zack: That cookie monster, THE Cookie Monster, is a gelded pet. A wild cookie monster will tear the limbs and entrails out of campers in search of one granola bar.

Steve: We never should have built that road through the Cookie Forest. 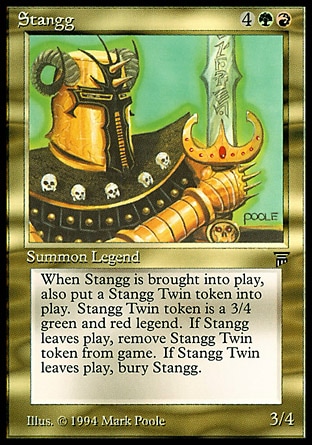 Zack: This guy is a total neurotic wreck. He spends hours getting dressed in this armor.

Steve: Stangg must look good to please the Queen.

Zack: She would say such mean things to me if a single one of my cowl skulls was out of alignment.

Steve: Oh no, is that a smudge on my sword!

Zack: Squire, please, let the other knights know I am not feeling well.

Steve: I will not be able to attend the siege. 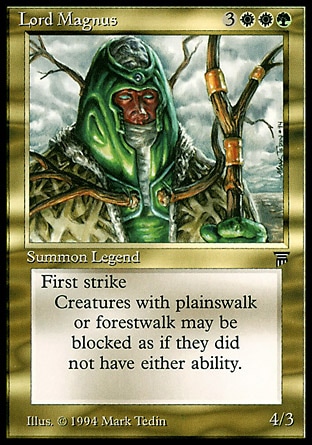 Steve: Lord Magnus is for sure a Mechwarrior.

Zack: He emerged from the elven forest to fight in the arenas of Solaris City. 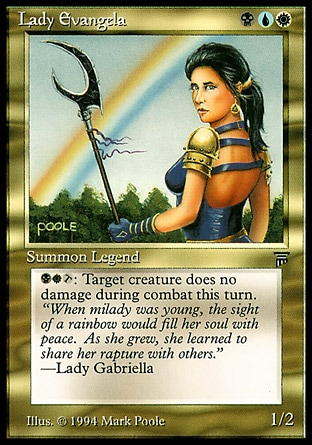 Zack: So she paralyzes her enemies by gazing upon the majesty of rainbows.

Steve: Hell yeah I would look at rainbows with her.

Zack: But you get out to that rainbow and it’s a brass chariot with tinted windows.

Steve: Sounds like somebody is going to the graveyard.

Zack: The one good thing in the prequels.

Steve: Yeah, I mean, other than EVERYTHING ELSE.

Zack: Thanks for reading, folks! And thanks for supporting us on Patreon!

Zack: I want to sleep like an exhausted berserker.