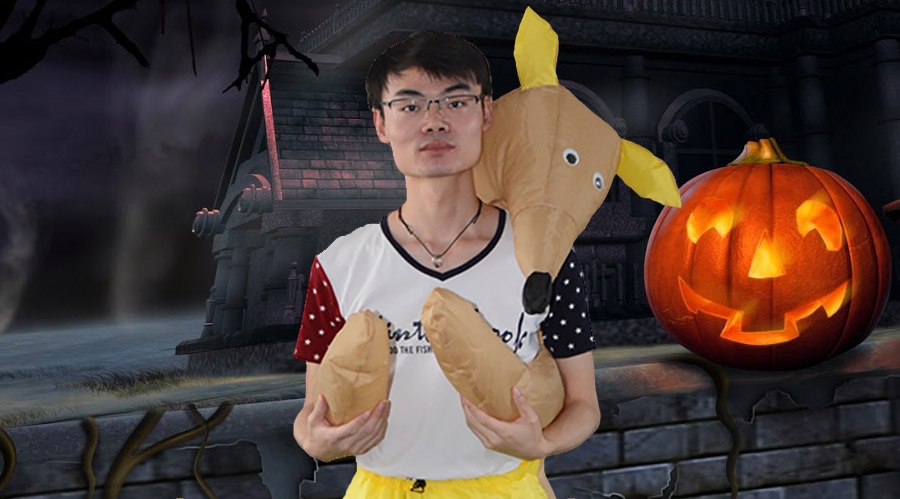 BoOOooOooooOOO! Halloween is here! Barely passable versions of your favorite licensed characters are out and about! Spooky ghouls from Marvel are prowling the sidewalks in search of treats. College kids are making bad, possibly racist joke costumes. Cosplayers are dusting off their buster swords and moms are painting faces. And then there are the costumes on Alibaba. Created in a dismal Chinese hellscape, these unlicensed knockoffs are available at a discount and ready to haunt your dreams.

Steve: This is highly unprofessional.

Zack: What is? Making fun of this year’s worst halloween costumes?

Steve: No, interrupting our Book of Vile Darkness adventure to try to recapture the magic of Halloween SWAT with me…

Zack: Dr. Thorpe is on vacation and you could never replace him anyway.

Steve: Oh, I see! Cruel on top of unprofessional!

Zack: You would rather be running the adventure where I am literally playing a poop-eating sex maniac murderer?

Steve: You didn’t murder anybody yet, but fair point.

Steve: Let’s get some fresh air.

Zack: The darkness of these costumes will be vile enough, I promise. 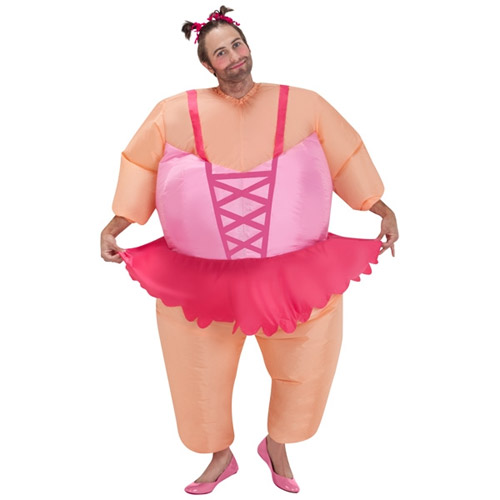 Zack: At the factory where they made these this is just called their “American woman costume.”

Steve: I was thinking about how most American clothes are made in China or some other Asian country and that includes the big & tall clothes, right?

Steve: So somewhere out there is a factory full of 90 pound people that is making nothing but 5XL clothes and those people must think America looks like this.

Zack: Macy’s parade floats bumping into each other?

Zack: Although, personally I find this guy’s face more disturbing by far than his costume.

Zack: Something about those rosy cheeks and his painted-on looking beard is nauseating.

Steve: Yeah, totally, dude. It’s not even the joke of the facial hair with the giant girlish costume.

Steve: It’s like if this guy was wearing jeans and a t-shirt with that face you know he would be trying to lure somebody into a van or something. 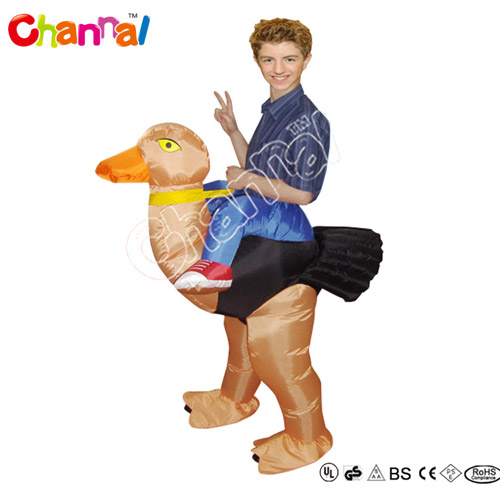 Zack: Cheap Wholesale Boy was my nickname in the club.

Zack: Yes, they had a pallet of me next to the giant packs of toilet paper.

Steve: How could they tell you apart?

Steve: Because you both go in a toilet, I mean.

Zack: Steve, dang what is up?

Steve: I’m not sure, dude, I think it’s the combo of interrupting the adventure and then this kid’s face. It is photoshopped onto his body. And I hate this bird creature with all my mana dude.

Zack: And so you are lashing out at your truest friend?

Steve: I’m not lashing out at Keith.

Zack: Why do you insist on hurting me? 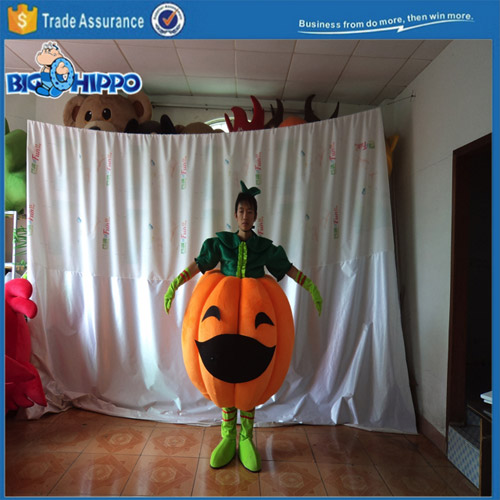 Zack: At midnight, this pumpkin prince turns back into a 24 year-old Chinese man who came to the city to find his fortune and is now living in an apartment the size of an outhouse with nine other people, breathing nothing but farts, and eating salted snake for breakfast once a week.

Zack: Because that’s when his shift ends. Midnight. Six AM to Midnight at the Big Hippo Costume Joy Production House.

Steve: These are the guys yelling China Number One at me in PUBG, aren’t they?

Zack: He never gets to see him anymore. But that kid could kill an entire squad with one clip of a P18 if he catches them in the same house.

Steve: I’m lucky if I can kill a dude from across the room with that double barrel shotgun.

Zack: Which part of China Number One had you confused? 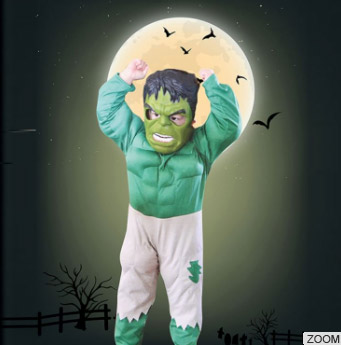 Zack: I understand the confusion. This is the Jungle Book Baloo.

Steve: You would think this costume was just labeled wrong but… there is no other Baloo costume on the website. No other Hulk costume that is a bear. This is it.

Zack: We live in a time where all objective meaning is gone from the world and all that matters is what you assert as reality. This says it is Baloo. It’s the highest quality.

Zack: Therefore, this is Baloo. It says so right there. Those old movies are outdated relics of a different time.

Steve: And Disney owns both characters now so what are they going to do, sue themselves?

Zack: Right. There is just no legal way to decide this so from now on Baloo is a tiny Hulk. 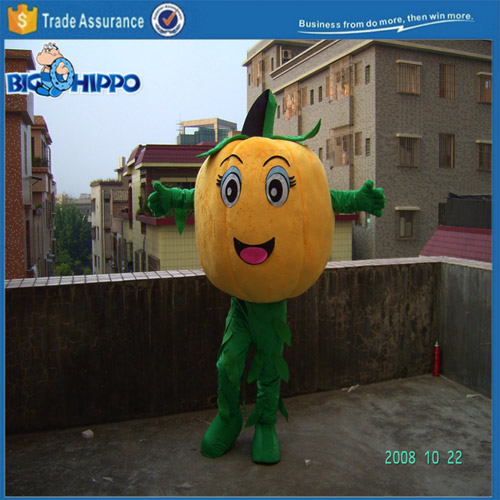 Zack: I defy you to find a more iconically dystopian image.

Zack: Stack this one right up against the metal foot crushing the skulls in Terminator or the Big Brother faces on the TVs in 1984.

Steve: He’s not even the right color.

Zack: How could he grow to a full, healthy color in that awful environment?

Steve: It doesn’t even seem real.

Zack: You are right this doesn’t feel like an actual pumpkin that is a friend to children.

Steve: Maybe one that eats children.

Steve: Drops down off the roof and slurps out their brains.

Zack: It’s so sad I feel sure whoever is in that suit is dead now.

Zack: Hell, they were probably dead when they took the photo.

Steve: The more I stare at this, the more I wish I were dead too.

A short interlude: The misery of the carried man 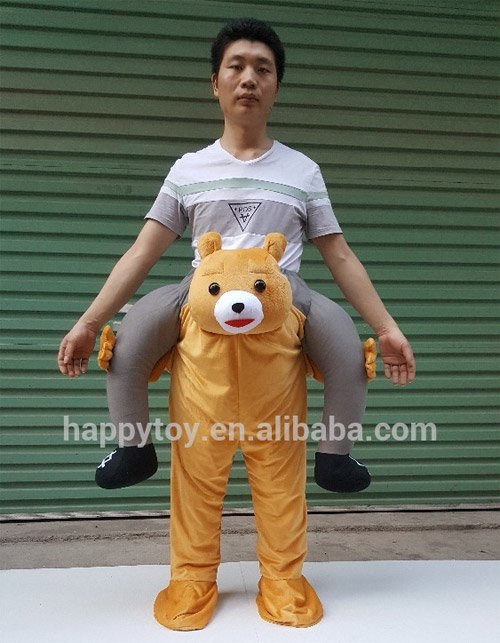 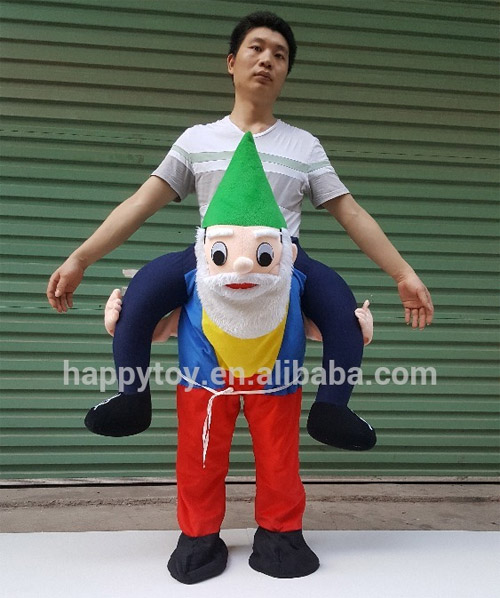 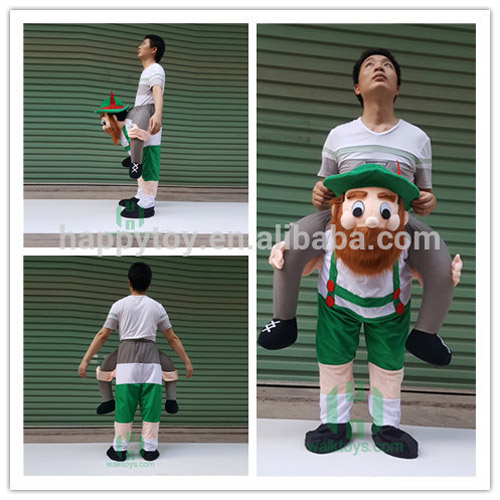 Steve: This is definitely a man who wants to let go of life and slip into the beyond.

Zack: Yeah, look at that last one with the leprechaun. He is already looking up into the sky searching for the rapture beam that will carry him off this hell called earth.

Zack: He has a second job where he climbs down into sewers and filters cooking oil out of the sewage to sell to street vendors who use it to fry toads and claim they are rats.

Steve: You know you are living in hell when your rats are counterfeit.

Zack: I’m not even making fun of this guy.

Zack: We’ll all be eating the sewer-fried toads in a few years. 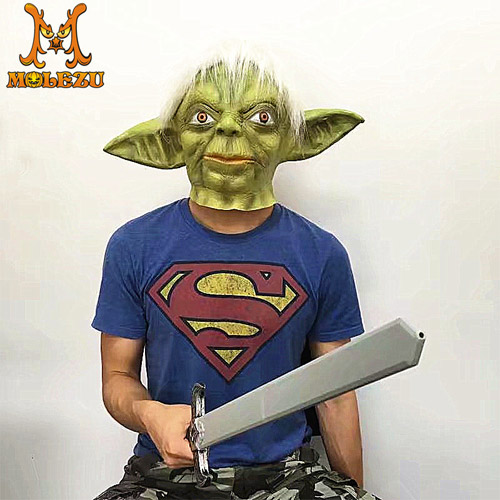 Zack: A lot to unpack here.

Steve: No. I feel sick to my stomach.

Zack: Gaze upon the hairy horror Yoda you must if a Jedi you wish to be.

Steve: Nope! I give up on being a Jedi.

Steve: If I were Luke and I saw this dude on Dagobah I would take off and do a strafing run.

Zack: He looks like if Yoda fucked a Morlock from the old Time Machine and had a kid.

Steve: Horrible and yet somehow dude that does not even fully capture how disturbing this is.

Steve: I want it to go away now. 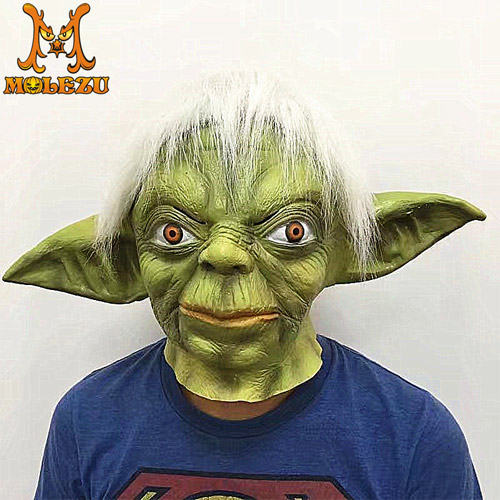 Zack: This is his passport photo.

Zack: For when he is taking a trip to your house in the dead of night.

Zack: Creeping around, moving the furniture, using your combs.

Steve: I walked away from my computer dude.

Steve: I was genuinely having a panic attack.

Zack: Sorry about that! We can move on to something soothing… 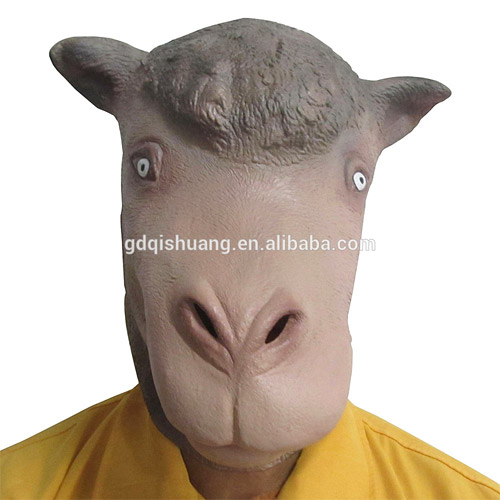 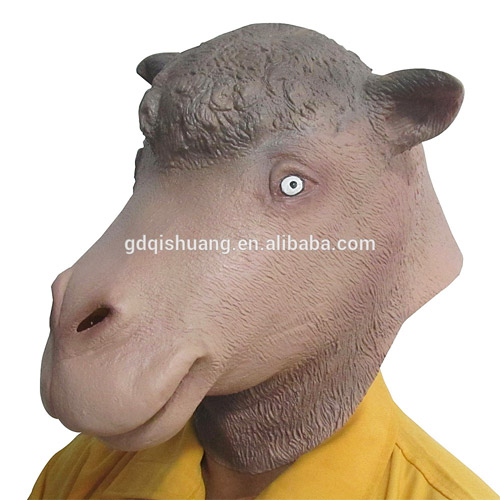 Zack: Oh, no, fuck this thing.

Zack: I want this thing off my screen.

Zack: I’m not looking at it.

Steve: I just had this flash, dude, of like you take the camel head off and there is this human head underneath with the same weird color and perfectly round blue eyes with tiny pupils.

Zack: It makes a high pitched sound like steam escaping and starts to vibrate.

Steve: Ugh and it unrolls this big long tongue like a cartoon and it’s just drooling everywhere.

Zack: Popping around doors like the Communion alien, ready to bust nuts up in you.

Steve: Ahhhhhhhh no shut up! 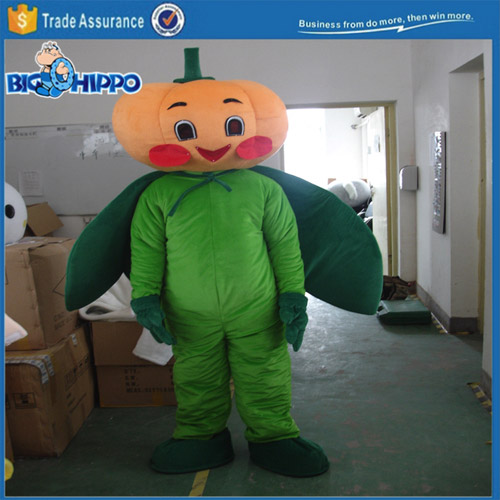 Steve: I don’t think pumpkin hero is going to save us.

Zack: And he’s happy about that.

Zack: He’s glad for those nasty-ass red skin tags on his cheeks.

Steve: I can’t tell if that paper is in his hand or on the box behind him, but I would like to pretend that he just got divorce papers.

Zack: She has moved on. She has found an alpha male rutabaga.

Steve: He brought her stability and she repaid him by throwing her gourd around to every daikon that would buy her a necklace or a pair of shoes.

Zack: He was too depressed to bring kids into this world.

Zack: I mean, always smiling, but these dead eyes. And she wanted to live. She wanted to start a family.

Zack: A new place to grow misery from the dead earth of China. 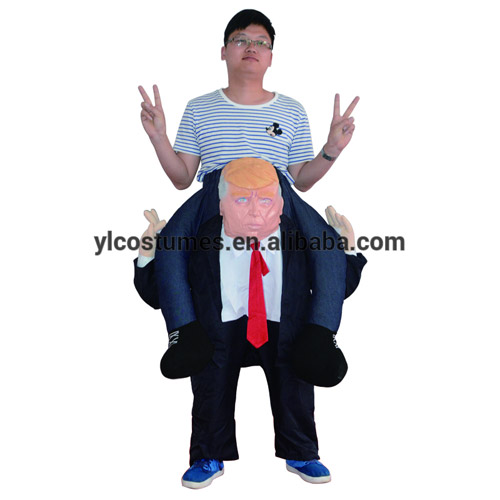 Zack: Honestly all out of jokes for this piece of shit.

Steve: What did this guy do to you?

Zack: Nothing! Poor guy. He is just pretending to sit on the shoulders of that spray-painted garbage pile who looks like a Halloween trash bag and it is draining him of all life and happiness.

Zack: A great bilious evil has risen up in our country.

Zack: I can’t joke about it anymore, my man.

Zack: It is fucked.

Steve: You made the order of all these. Why are you ending it on such a downer?

Zack: This shit hangs over my days like a cancer diagnosis.

Zack: In charge of the world.

Steve: Just pretend he’s going to get whatever they did to Freddy Krueger.

Zack: They burned him, Steve, and now he murders children in their sleep.

Zack: Too late, he’s moving on you like a bitch.

Zack: Hope all the good people aren’t dead or in jail for the next one!