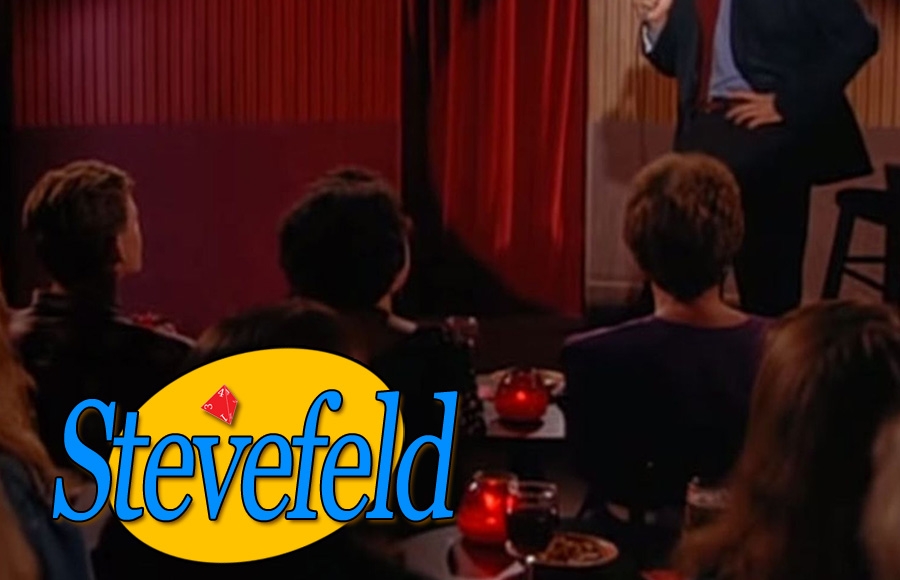 Real life isn’t all about destroying the lich king’s phylactery or blowing up the Matrix. If you’re looking for an evening of pure roleplaying with your gaming group, try giving them nothing to do with one of these pointless adventure hooks.

UNICORN DEAL: Reports of a unicorn in a nearby forest excite local townspeople, who begin leaving offerings for the unicorn. The party discovers that the unicorn is making requests for luxury items and foods that a unicorn would never want. They are asked to investigate by a suspicious baker and find out that the unicorn is real, but that the unicorn hangs out with an eccentric human who is using the goodwill of the populace to furnish his new hermit shack. He offers to cut the party in on the “unicorn deal.”

KNIGHT MOVES: A really cool knight has been making an impression with the bright orange plumage on his helmet. The uncle of one of the party members wants orange plumage even though he does not own a helmet and asks them to get a hat with the plumage made in a nearby town. By the time the party returns with the hat, the knight has changed the color of his plumage and the ungrateful uncle refuses to pay up.

TROLLING: A laidback troll who guards a bridge into a nearby village schedules his vacation on the exact day that the troll checker will be coming by to make sure the troll is asking riddles and threatening to eat travelers. If the troll is absent, a new, much meaner troll may be assigned to the bridge. The party must hustle to build a troll costume and stop annoyed travelers. They soon learn the troll checker came the day before and they have to scramble to catch him and convince him there was a death in the troll’s family to save the laidback troll’s job.

COW KING: A horrifying creature has been emerging from the misty bog near a small village and devouring livestock and villagers in grisly fashion. The town burgermeister’s wife approaches the players about the disappearance of the burgermeister’s prize heiffer. She describes the cow to them and asks them to find an identical cow so she can convince her husband that his beloved cow was not dragged off by the ravenous bog beast.

DREAD WOMAN: The last owner of an ancient crumbling manor is being haunted to his death by ghosts within his manse. In the hopes of exorcising the spirits, he decides to open his property to any comers to take what they wish. An eccentric friend of the party has his sights set on a huge stone statue of a naked woman on the property’s overgrown yard. He asks the group to help him get the statue across town to his second floor flophouse. But is the creepy statue haunted? No, it’s just creepy. And really heavy.

FASHION PLAGUE: An unspeakable plague sweeps the land and conical incense masks become the height of fashion. But when one of the players sees a total jerk wearing an identical plague mask, they must decide who may continue to wear the mask and who must retire their mask and find a new one. If the players decide to retire their mask, the jerk decides to retire his the next day and has a similar mask again.

PACKRATS: Rat men living under the floorboards of an insane asylum are collecting vintage figurines based on a famous jester. The same jester the player’s uncle used to work for. When news of a rare figurine surfaces, the group must compete with the rat men for the figurine. If the group manages to secure the figurine the ungrateful uncle immediately declares it a fake and throws it away.

SHIRTLOOSE: When an ogre borrows a shirt from a fat king, the king is too shy to ask for it back. He sends he players, but when they arrive at the ogre encampment they are forced to listen to very long and boring stories.

CAT DADDY: The slime creature that pollutes the sewers of a city is feeding cats with discarded scraps of food, causing an unpleasant rise in the number of stray cats in the city. The players must convince the slime creature to stop.

SUBROUTINE: A computer hacker has cracked the code for buy 10 get 1 free subs at a local sandwich shop, allowing him to spoof punched rewards cards. The only problem? He needs lots of people to go into the sub shop and cash out cards so he can stock his new sub sandwich food truck with cleverly renamed sandwiches. But when a local street zine writes a rave review business picks up and his rewards hacking scheme drives the original sandwich shop out of business.

BURNING CHROME: A famous street racer disappears from the illegal racing circuit and his high-octane car is sold to one of the party members at a discount rate. But when they realize his cyber ghost is inhabiting the car’s computer, and is very vocal about passenger and their body issues, they find it hard to entice a new buyer for a resale.

GLITCH MOB: A computer virus in a local government database causes the city to issue an ID card to one of the group members in the name of a TV celebrity. What seems like an amusing mistake worsens when the celebrity does something offensive on TV and the mistaken identity spreads to other computer systems to the point that protesters begin to follow the party.

CHIBA DREAMS: A hot new Japanese restaurant opens in the city and the party manages to land a table. While waiting to be seated, a customer from another group standing nearby does a racist Asian impression. The owner of the restaurant overhears this with his cyber ear while his back is turned and when he turns around thinks one of the party members did the impression. Rather than confronting them, he tortures them by seating numerous other parties before them.

BAD TASTE: A space pirate is dating an alien queen, but when he finds out she likes ZimZam music (a sort of tooting techno music made with orbs) he can’t take her seriously anymore. He asks the group to pose as a famous ZimZam band at an upcoming space party and to act rude to her. It shouldn’t be hard since ZimZam bands wear space helmets, but when the real ZimZam band they are impersonating shows up, they are very complimentary of the alien queen.

SPACE FLORIDA: A minor family tragedy calls the group back to a retirement planet where they become unwillingly embroiled in the petty politics of an old folks’ arcology island.

FREE DUMMY: A deep space freighter’s cargo hold full of dummies has broken open and pods full of dummies are drifting towards the neutral zone. Nobody knows what to do, but an eccentric smuggler friend of the party can’t pass up some free dummies. There are a lot of things you can do with dummies.

OVERDUE: The space library contacts one of the party members about an overdue book. One small problem: it’s a book from an alternate timeline. The group can pay a small nominal fee to compensate the library for the lost book or go on a mindbending journey through dimensions to buy a copy of the book and return to the library.

THE HUNGER: A many-tentacled beast from a pit threatens a buffet restaurant where the group is waiting to dine just as the owners have changed out the brisket. It’s a really good brisket too. The restaurant is known for it.

DEATH ZONE: Teenagers are brutally murdered at a campground in rural New England. Several miles away, in the nearest town, a friend of the group is trying to prevent the city from re-zoning residential property to commercial for a chain store that would threaten her shoe store. The same shoe store frequented by a hulking masked man who always pays in cash and does not talk. The players must help their friend win the zoning fight.

NAKED FEAR: A faceless wizard of evil has appeared in the great cities of the world and proclaimed the dying times have begun. The dead will no longer stay dead. The living will experience horrors unlike any known before. Also, one of the group members has a girlfriend who likes to be naked at all times when they are home together and it is causing a lot of problems in their relationship. Topless is fine, it’s fine, but not wearing any pants? It seems a little weird, especially when you’re trying to have a meal.

BAD OATS: Ulysses’ Good Oats has changed the flavoring of its molasses oats. Nobody in town seems to believe the group, so to prove it they must ride to nearby Parched Gulch, where an old tin of Ulysses’ Good Oats are still available at the general store. Unfortunately, as they arrive, an elderly woman buys the last tin. She can be persuaded to give them up, but it is going to involve listening to hours of her nerve-wracking stories about settlin’ out west.

THE TIN STAR: There’s a new sheriff in town and he refuses to wear the previous sheriff’s badge. There’s nothing wrong with it, but he is convinced he should have his own badge. Not a big deal, except the badgemaker is due to be hanged in a nearby town. The group must ride to his rescue, only to discover that he has sworn off making badges ever again after the last sheriff framed him for the crime that was going to get him executed.

ROCK DWELLERS: Several Indians have been camping on a rocky hill overlooking the town. But are they really Indians? That word comes from “India” and these people are both culturally and ethnically nothing like the natives of India. The group must decide whether to research them in Union City at the library or go and try to ask the Indians what they would prefer to be called.