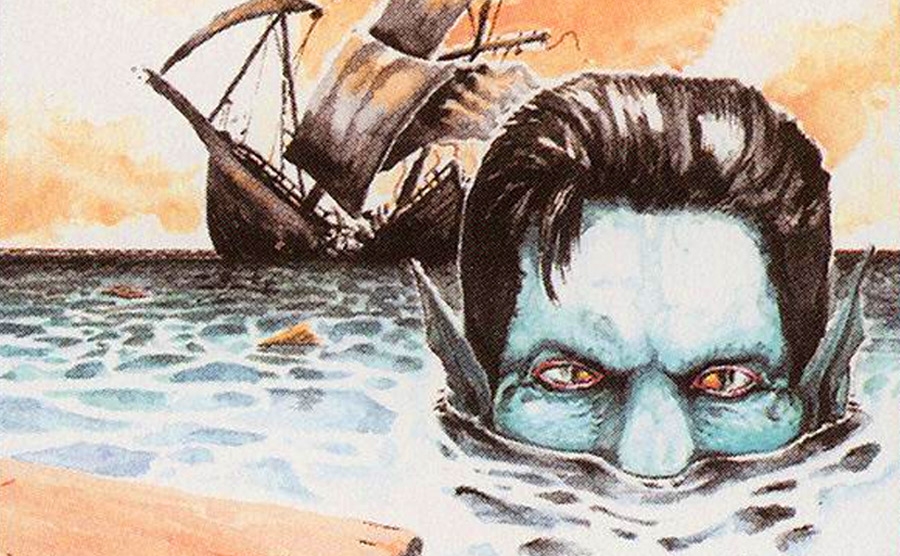 We covered the original Magic the Gathering cards and the “Arabian Nights” set over on Something Awful, now we turn our attention to 1994’s “The Dark” expansion set. This set delved into the gloom of darkness, adding the word “shadow” before various monsters and the set included numerous goblins, witches, and bogs. The art was still often uneven, to be charitable, and the world in which Magic takes places was still in its primordial phase where Christian symbols were popping up alongside elves in the artwork.

Zack: Legends is where I stopped playing Magic completely, so I don’t remember any of these cards.

Steve: I lasted a couple more years. I think the last set I bought any boosters for was Mirage. I bought some basic decks at Walmart in like 2003 to play with a friend when we got stuck on a road trip.

Zack: You taking road trips is the more interesting information. Where were you going?

Steve: Me and Keith went to Anime Expo in California. But we got lost in the mountains and I accidentally got our rental car stuck on one of those emergency braking ramps for trucks. Imagine explaining the fact that you are dressed like a World Eaters Space Marine to a highway patrolman and a tow truck driver.

Zack: Did you have the orange safety tip on the end of your bolter?

Steve: No, I don’t think he was worried it was functional though because the plasticard was coming unglued because Keith’s little sister kept messing with it.

Zack: What was she dressed as?

Steve: Uh, basically Avril Lavigne, but it wasn’t like cosplay.

Zack: The secret is that it’s always cosplay, Steve. For all of us.

Steve: Bonnie still hates me for that trip. We were stuck in Denver for two days and we never made it to California.

Zack: Things to Do in Denver When You’re Dead: Evidently, play magic.

Steve: I don’t want to dwell on that trip too much. Let’s start. 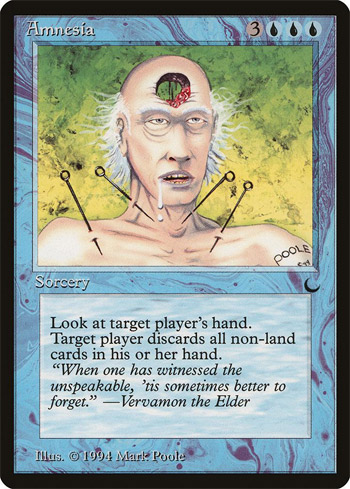 Steve: Now, I’m not a doctor, so don’t count this as medical advice, but I’m pretty sure the diagnosis on this one is not amnesia.

Zack: I feel like this was someone’s C- project at Cenobite University.

Zack: “Gorveinius, Maggot of the Eternal Torment, I feel like you started something here with the needles, but you didn’t really have a concept and the result is half-finished.”

Steve: Also a hint of Bernie Sanders there.

Zack: I was thinking Rick from Rick and Morty and he’s pretty much Doc Brown who is pretty much Bernie Sanders if all his inventions were about regulating Wall Street.

Steve: MARTY! I don’t want to talk about the damn Libyans!

Zack: We’re going to have to go back in time before that Black Lives Matter protest in Seattle and convince black people that a new Glass-Steagall banking law will stop racism.

Steve: Oh, never mind, I had the top ten percent of my brain removed. 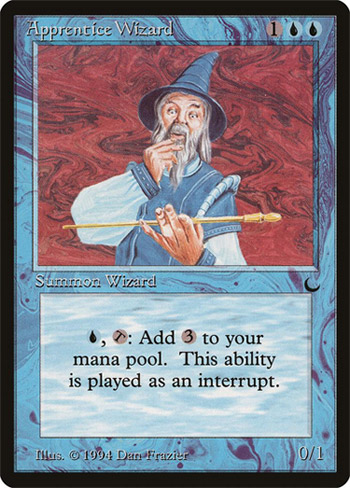 Steve: “Goodness me, it IS! A wooden dowel!”

Zack: “There’s no limit to the number of magical things I might do with this! Why, I could construct a little teepee or use it to hang my laundered hats to dry.”

Steve: I bet he gets this looks of bewildered wonder on his face every time he sees any object. “Oh, my, a table! This is phenomenal!”

Zack: “A pot for my piss! Such a beautiful thing!” And then he proceeds to pee all over the floor because you know this dude is a messy pisser too.

Steve: My magic is wild! It pays no mind for toilets or shower mats or even that vent over there!

Steve: Tap three water to tap all of your opponent’s non-water lands. 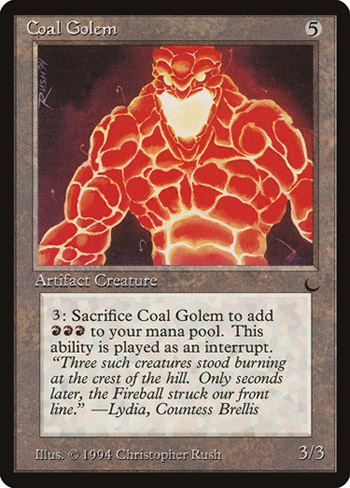 Steve: Created to be sacrificed as fuel, but at least he’s happy about it.

Zack: It’s a metaphor for life, really. We’re all just standing around, oblivious, waiting to die and become fuel to buff a goblin or something.

Zack: Of all the leaders in history, Stalin seems like the one who would have most eagerly sacrificed lives to power some sort of magic device.

Steve: It’s the traditional Star Trek moral dilemma. Can you sacrifice one life to save all the lives? Except with Stalin it’s more like can you sacrifice 49% of the lives in the most horrible way possible to save the other 51% of lives.

Zack: “Da, comrade, I must do this for good of people. Also how was I supposed to know placing kulaks onto frozen island without food would make them all die and turn to cannibalism? Have someone shot for mistake. Preferrably another kulak.”

Steve: “On up side, now I have flame sickle for glorious Motherland.” 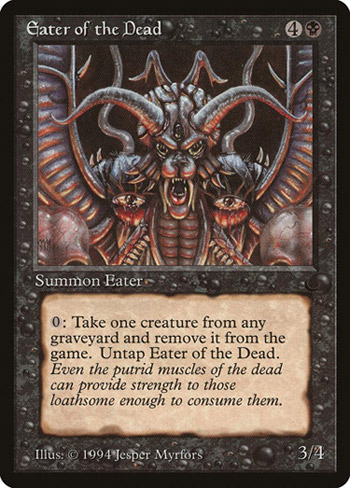 Steve: Eating a bunch of dead bodies is about as far from living deliciously as it gets.

Zack: You probably eat dead bodies all the time. In the form of hot dogs.

Steve: First of all, I don’t eat hot dogs very often because I don’t like natural casings, because you’re basically eating a butt.

Zack: Where have you been? It’s 2016, Steve, everybody is eating butt. It’s the thing we do now. There are songs about it.

Steve: Second of all, even if I did eat them, those aren’t dead bodies, those are prepared meats.

Zack: No steak in the Sumner house?

Zack: Gross goat monster Eater of the Dead can work with that. He’ll just grind up some goblin corpses into burgers. You’ll never know the difference.

Zack: I promise you, Steve, with the right seasoning, a goblin burger tastes just like one made out of kulaks. 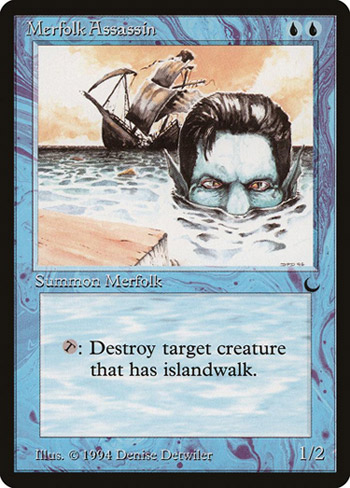 Steve: I remember this scene from Predator.

Zack: You mean the part where the elf was taking a bath and broke his toy ship?

Steve: I also remember getting like five hundred of this stupid card when I played Magic.

Zack: I don’t remember this guy specifically, but I do remember that feeling. Opening pack after pack and seeing this some stupid face in almost every pack that pissed me off.

Steve: Yeah, they had a real knack for always picking the dumbest art for the card that was super common. It was usually either an orb shooting lightning bolts or some goblin dingus staring right at you.

Steve: We put them on island, comrade. They eat each other and save us grain. Two kulaks, one stone.

Zack: Which coincidentally was the most common card in the Antiquities set. A black instant spell that allowed you to remove the kulaks and hand over all the mountains to the goblins to set up collective farms.

Steve: I don’t even know what kulaks are. Have you tricked me into saying something racist?

Zack: Not this time. Kulaks are like all the people Bernie hates plus the people who gentrify neighborhoods and will turn a taco stand into a place with a ragtime aesthetic that sells custom beard oil.

Zack: So did Stalin. 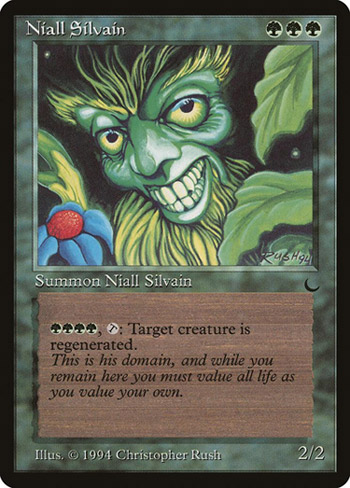 Zack: Just look at that asshole.

Steve: Please do not tap your Niall Silvain anywhere near me or my son ever again.

Zack: Tap three green and Niall Silvain and place a “scarred for life” token on each of your opponent’s creatures.

Steve: You can just tell this dude sings some sort of song too. Like a Tiny Tim sort of ukulele nightmare.

Zack: Have a wank / through the tulips

Steve: Now I sort of want to make a Niall Silvain deck to mess with people. Like, I know the deck would never win, but maybe just seeing me lay down a bunch of this dude would give me some forfeits.

Zack: Good news, I just looked him up and he’s worth about 10 cents so you can easily fund this.

Steve: I’d have to look up the rules on how many of a card you can have in a deck. It’s probably like two now or something.

Zack: You know how every animal has a name like a “murder” of crows? What do you call more than two Niall Silvains?

Steve: A skeeve of Silvains?

Zack: A fondle of Silvains.

Zack: “I just spotted a grope of Silvains muttering about underpants in the trees over there.”

Zack: This is why family reunions are so uncomfortable.

Steve: Didn’t gluten turn out to be a psychic allergy?

Steve: But, dude… that’s just what they want you to think.

Zack: I know what Natural News and Infowars want me to think and it’s that everything is bad and a conspiracy and Zika is a cover for the FEMA camps but also Monsanto caused Zika because of herbicide or something. 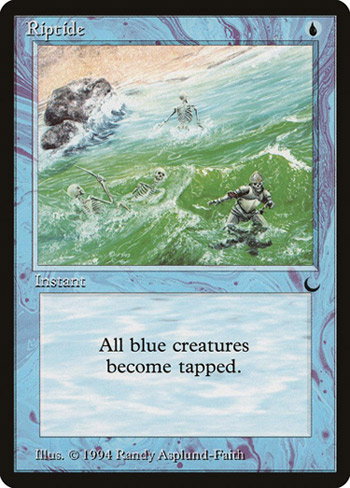 Steve: Not very well apparently. I hope there is a skeleton lifeguard on duty.

Zack: Skeleton Pamela Anderson clattering down the beach with a one piece hanging off her like rags on a woodpile.

Steve: One of those floaty first aid things banging on her xylophone ribs.

Steve: Right, take your time. The skeletons aren’t going to drown or anything. 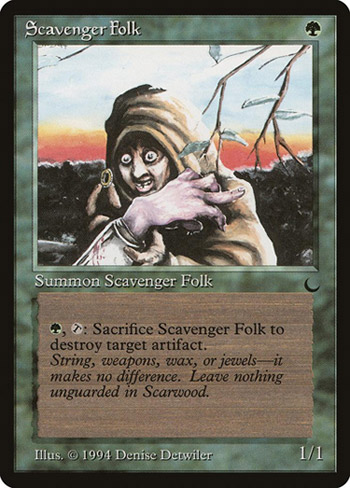 Zack:They might as well have called this one “Filthy Gypsy.”

Zack:Why do you think they’re taking things from dead goblins? For fun? No, it’s to feed their scavenger folk children.

Steve: I think it’s totally fine, dude. If Urza’s fabuluos contraption or whatever is broken down, go ahead, steal the rims. Whatever puts rags on your crazy-eyed children.

Zack:Crazy-eyed? Rags? I see how your mind works, Steve. Just because they try to liberate goods does not make them any less deserving of their dignity.

Steve: Can I interrupt your outrage for a second and point out the rules. Why do you have to sacrifice the scavenger folk to destroy an artifact? Are they like suicide bombing the artifacts?

Zack:No, clearly they grab the artifact and run off to their filthy caravans where they cluster with their giant screaming family and plot how to kidnap good Christian children and sell them for more trinkets.

Steve: Why didn’t you just say they were kulaks? 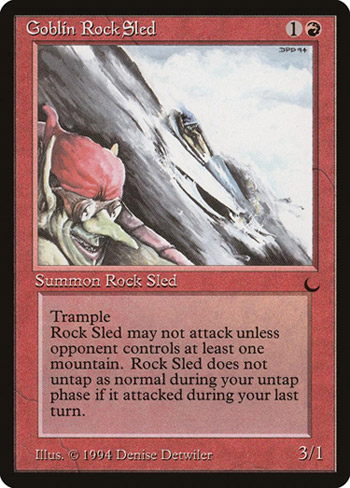 Zack: We’ve been talking about goblins a lot and there is a good reason for that: there are, I believe, seven different goblins in this set.

Steve: Yeah, goblins are very common in old school Magic, but this set really does have the most. So we had to include a couple.

Zack: Most of them are what you’d expect. This one is on the silly end of the spectrum.

Steve: I actually like the rules. They’re clever. They attack and then they have to spend a turn walking back up the mountain.

Zack: Would be a lot to keep track of if you have multiple sledding goblins.

Steve: Which you would because I’m sure these were among the most common cards in the set.

Zack: “We sled goblins to island. Leave them without food. Now we see who is common.” 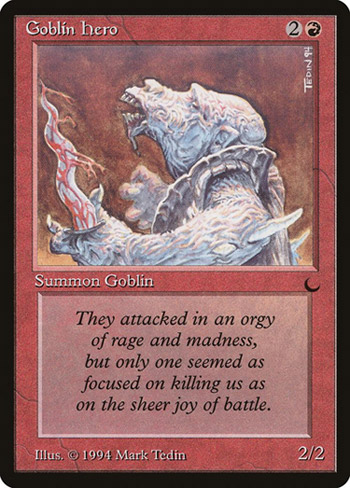 Steve: I HATE this thing. It’s so gross!

Zack: Like if someone made a skin suit out of a goat and then coverd that in ball sacks.

Steve: Mark Tedin you are a grisly dude.

Zack: I looked him up and he is definitely one of their best artists. Check this one out.

Steve: That is dope.

Steve: I like the print of Treacherous Werewolf he is selling.

Zack: I don’t know why they don’t seem to be using him recently, but they need to get back on the Tedin Train for some of these freaky monsters. 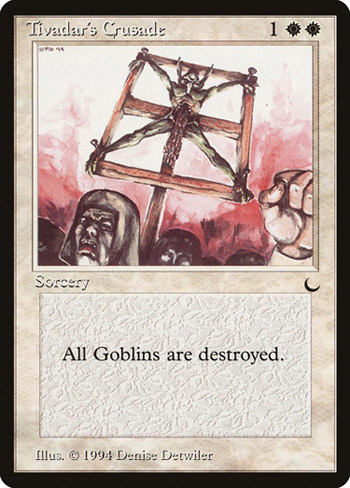 Steve: Ha ha I love this one. For a set packed full of goblins this is like a big middle finger.

Zack: I want to make a Stalin joke, but I feel like we drove that one into the ground.

Steve: It never stopped us before.

Zack: Let’s end things before I humiliate myself.

Steve: It turns out the real island with no food is inside yourself.

Steve: See you next week everybody. Please support our Patreon and keep us off the island with all the other kulaks.