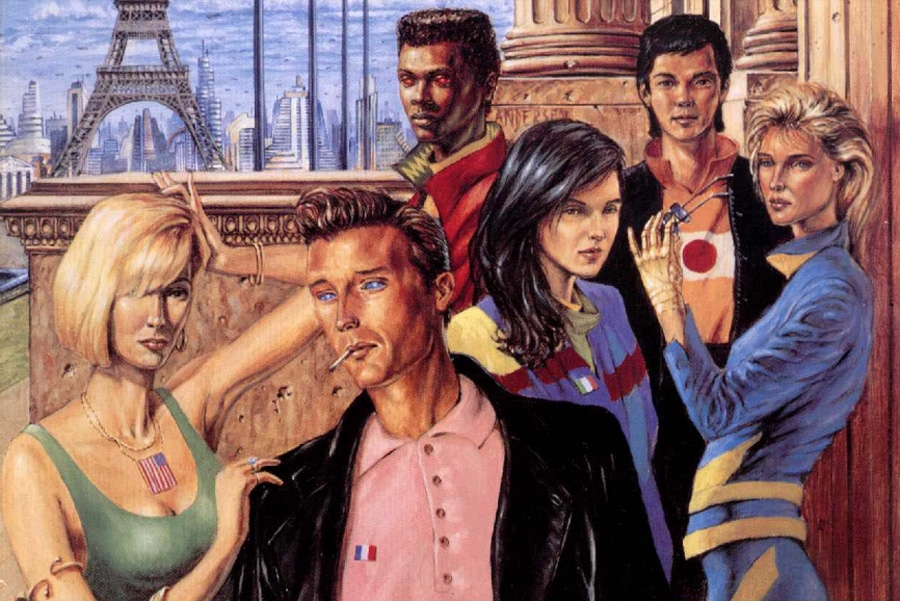 With Old Blighty casting off from the European Union, it’s a great time to reminisce about European fantasies of the pre-EU era. Cyberpunk 2020’s Eurosource sourcebook was released only a couple years before the EU was formed in 1992, but the writing was on the wall that a European unification was coming. That makes what the book gets right understandable and what it gets wrong all the more enjoyable. Journey with Steve and Zack to the EU of 2020 by way of 1990. 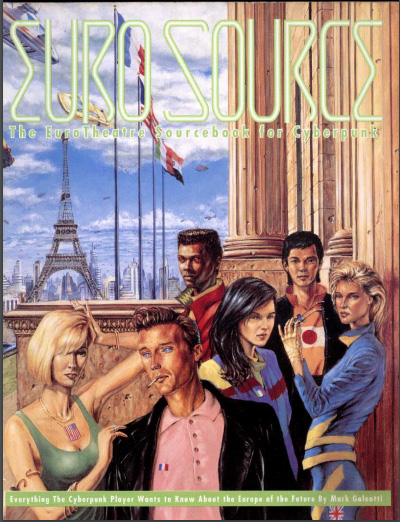 Zack: Although they thought he would be French.

Steve: You never know from whence the Cumberbatch will arise.

Steve: I dig the nationally coded shirts on the cover, but why is there a USA shirt and a Japan shirt?

Zack: These Eurotown hotties are so stylish that USA and Japan can’t stay away.

Zack: Appropriately, the Europe of 2020 in this book is the Europe of New Wave videos from the 1980s. Ultravox or Berlin or something.

Steve: Yeah, I got it. Big shoulders and bad mustaches.

Zack: Futuristic silvery space suits, but sexy, and before they all had hexagons and pouches on them.

Steve: All of that, but it’s an animal. It’s a bad bird flying in the night. A cool evil owl.

Zack: A cat with red eyes and chrome feet. Stalking you through the steamy alleyways.

Steve: The pulse of cool techno beats blaring from a limousine with gull wing doors.

Zack: A sexy long legged blonde with a whole bunch of TV screens behind her and they’re all showing gum commercials.

Steve: There’s a shark in the night. A night shark. And polizei lights are reflecting in its black eyes.

Steve: A lady with a sword and a headset microphone and she’s not running a TED Talk.

Zack: You’ll drink martinis with the Syko Princes in Frankfurt.

Steve: Lift weights with the Beef Masters at Le Gymme.

Zack: Chew tobacco with the Amsterdam Chrome Hillbillies and fly cyberkites with the Kitekids in Rome.

Steve: Confront a guy who touched your girlfriend inappropriately outside a cafe in Athens.

Zack: Carjack a milk truck in the Dairy Sprawl and crash it through the gate at the blimp base in Brussels.

Steve: Argue about chips and crisps with a cockney Cyber Ninja in Leeds.

Zack: Upload nicked data from me mobile to a chav.

Zack: An accurate depiction of current events in the EU.

Steve: This book contains a lot of drawings of video screens with creepy looking dudes yelling on huge video screens.

Zack: One of the ways future authoritarianism used to be depicted is with the giant video screen and a guy yelling at people.

Steve: Like, literally the year 1984, not the Orwell book.

Zack: I blame that Apple commercial with the sledgehammer.

Zack: Which makes it some serious Don Draper shit.

Steve: “An Apple a day keeps the doctor away, but what we really want to keep away are our mounting fears of the Cold War.”

Zack: “What if your product could convince people that having no DVD drive on their computer was a feature? What if they thought having only one port and no choice was actually freedom?”

Zack: *video of a mac advocate fumbling with ten plugs and a dongle* “It’s called the MacBook.”

Zack: Yeah we have this enormous portrait-oriented video screen hooked up to a bunch of pipes in our boardroom.

Steve: Is that a boardroom? Everyone is just sort of hanging out.

Zack: It’s probably a meeting room at the EU. Once the evil guy on the giant screen goes into full-on MWAHAHAHA mode they start chit-chatting.

Steve: So based on this book, Germany is pretty much correctly predicted. It’s the big boss of Europe and other than the “Wasting Disease” that happened in 2000 in this book it all shaped up pretty much the same way.

Zack: Angela Merkel isn’t quite the iron lady of the EU who MWAHAHAs on vid screens.

Steve: My main memory of Angel Merkel “doing something” is her freaking out when George Bush grabbed her shoulders from behind.

Steve: Oh man it’s worse than I remembered. That’s almost as cringeworthy as the time that president sold out the American people for big bucks.

Steve: Which is all presidents ever.

Zack: Dang even Eisenhower feeling the scorch on that hot take.

Steve: Everyone looks so sad.

Steve: According to the book, France is somewhat accurate, but they talk about how there was a limited nuclear war in the Middle East in the late 1990s, which caused a huge influx of Middle Eastern and African refugees. But this didn’t have the effect you would think…

Zack: Extraordinary level or racial harmony is not what I think of when I think of France.

Steve: Yeah, no doubt, dude, yet somehow they got that part so wrong and still got the terrorism part right.

Zack: Anti-EU terrorism rather than ethnic or religious terrorism.

Zack: I mean, if the EU is bad enough to drive England away, maybe we’re headed towards The Anti EU Front demolishing the Eiffel Tower.

Steve: The Eiffel Tower cannot catch a break in science fiction. If it is present in sci-fi it is 99% going to get blown up.

Zack: This one definitely checks out.

Steve: Although they’re still in the EU in this version of 2020.

Zack: Now we don’t know, maybe they’ll stay in our version too.

Zack: Yeah except instead of ripped up punks in half-shirts it’s fat footie dads getting headbutted by Russians.

Zack: I don’t know, those Russians got pretty rowdy. They figured out how to make chairs fly.

Steve: In this reality the UK is also almost ignored in the EU, but not because they refuse to use the money, but because they’ve been under martial law since like 2002.

Zack: And also because the EU dropped a meteor on the USA so they don’t really like English language countries.

Steve: That’s a whole story for another article, but basically in Cyberpunk 2020 the Europeans control earth orbit and occasionally drop meteors from orbit onto people they don’t like.

Zack: And somehow it’s the USA and not muslims.

Steve: A big chunk of the French section is talking about dreampainting and graffiti and how there are graffiti colleges and doctorates and it’s a legit art form taught in schools.

Zack: Mr. Brainwash can finally get his doctorate.

Zack: Also, don’t act like graffiti isn’t a legit artform in our world.

Zack: Just look at the great commentary of Banksy. Mickey Mouse wearing a gas mask? A rioter throwing a bouquet of flowers? A soldier with a monkey face? Genius.

Steve: I remember when he went to Palestine and someone tricked this Palestinian dude into selling the valuable Banksy art for like a pack of gum.

Zack: It’s a war out there according to Cyberpunk 2020:

Zack: I’m picturing him walking in front of the gun barrel and there’s a big puff of aerosol paint and he’s wearing red Mickey Mouse ears chucking cheese bricks at the bobbies.

Steve: I wonder what a battlefield looks like in the graffiti wars…

Steve: Not just a dump, but a radioactive dump.

Zack: It’s not advertised, but creating Eurostyle produces a lot of toxic sludge. Hundreds of gallons for one wide-shouldered jacket.

Steve: All those Rocketeer shirts creating a new Chernobyl.

Zack: What a polite way to talk about Muslims.

Steve: I think that guy might be some sort of Arab Ninja.

Zack: There are several references in the text to the Walker in the Wastes as some mysterious, potentially dangerous tribal figure. But I think it’s Ithaqua the Wendigo from Lovecraft.

Zack: I’m not sure there is such a thing as a perfect chance to plug that.

Steve: I see somebody was at the face-painting booth at the fair.

Zack: Ja, willkommen to the Eurozone. I see you have a Koffer but you do not have the pouches. We all wear the pouches now in EU.

Steve: BTW I have a lamp robot just like that I use when I’m messing up inking on miniatures.

Steve: Come and find your career in the EU. You can major in computer psionics, princess guitar, cyber Val Kilmering, news loafing, or machine pistol fashion.

Zack: “We need you for the graffiti wars! Shoot your sexy little machine pistols at the bad graffiti boys. Film them being bad. Let’s do this, ladies.”

Steve: We hope you like really trashy techno music. The kind where a woman goes WoooOooooo OOOooaaaaa OOoooo for no reason like it’s a USA late night sexy TV show.

Zack: This image is a summary of Cyberpunk: Eurostyle. A dude that looks like a Nagel print holding twin SMGs and a ski lift gondola in the background.

Steve: Yeah, that sounds about right. There are none of those hulking metal cyber psychos you see in the Cyberpunk main book.

Zack: Or those sexy Soroyama cyborg ladies from the Chromebooks.

Steve: I give it credit though, dude, considering it was written before the EU was formed it gets things pretty close to right.

Zack: Except for that whole France not having racial tension.

Zack: Now, coming in a couple days we are going to be announcing something new related to a certain Call of Cthulhu campaign everyone is waiting for us to do.

Steve: “Everyone” waiting for us is a bit of an overstatement, but it’s going to be cool.

Steve: Don’t you have something coming up too?