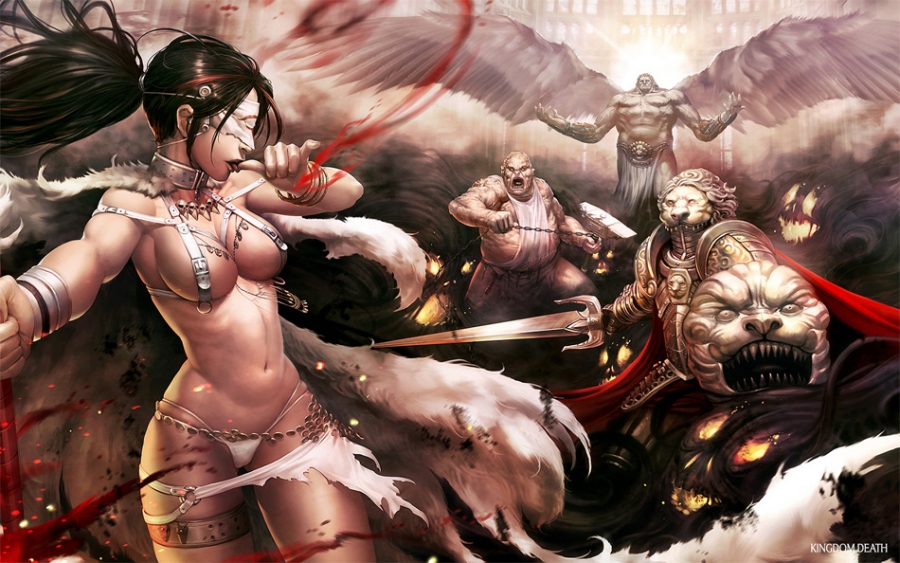 Kingdom Death is a narrative board game described as “boutique” which means “expensive as hell.” A Kickstarter for the game in 2016 raised over 12 million dollars and current unopened copies of the game are selling for over a thousand dollars on ebay. Miniatures produced for the game sell out quickly and almost all of them become worth many times their original (and still expensive as hell) cost. The new 30mm scale miniatures are sold individually for $25 for basic human characters and much more for the monsters. The setting, themes, and artwork of Kingdom Death are gruesome horror tinged with frequent sexual themes. Does it work? Find out!

Steve: On paper, this game seems like it was made for me. Then I look at my bank account and realize there is no way I can buy this thing.

Zack: It’s for the people who like Warhammer but wish they could pay more.

Steve: Yeah, I guess that’s part of the problem too. I love the busty babe ready to kick some butt. Not so sure about the topless babe holding a dead baby and eating guts on a mountain made out of faces.

Zack: My mind immediately goes to Exalted and its “mature” themes where mature just meant spraying blood all over the T&A and including a bunch of rape themes.

Steve: Well, let’s give this one a chance and see what it has to offer before we throw it on the same pile as bad old Exalted. 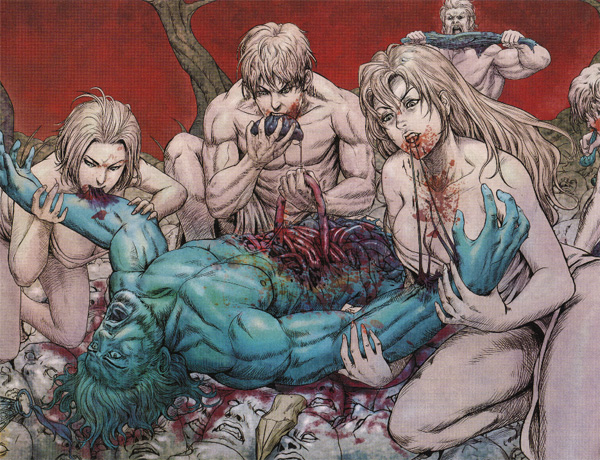 Steve: When even the meat’s hair turns green you should probably take a pass.

Zack: The artwork in Kingdom Death coveres a fairly wide variety of styles, from realistic to Asian artists working in an anime-influenced style.

Zack: Yeah, right, production values are what this game excels at. Huge full page artwork in the hard copy of the book features intricately gruesome detail that carries over to the computer-designed miniatures.

Steve: So what’s the down side?

Zack: On this one? Nothing. It’s extremely gory. A lot of the artwork seems to want to capture the desperate struggle for survival. I’m not totally sure what’s going on in this image, but if I had to guess it’s the characters being turned into cannibals out of desperation.

Steve: Kingdom Death is sort of like Dark Soulsville: the game. You have almost no freaking chance, your little settlement is almost certainly doomed, and you have to fight these impossible boss monsters that are probably going to eat your face or turn you into zombies.

Zack: It’s a metaphor for the struggle we all face in our lives. The struggle to avoid being eaten by the mouth in the stomach of a giant elk. 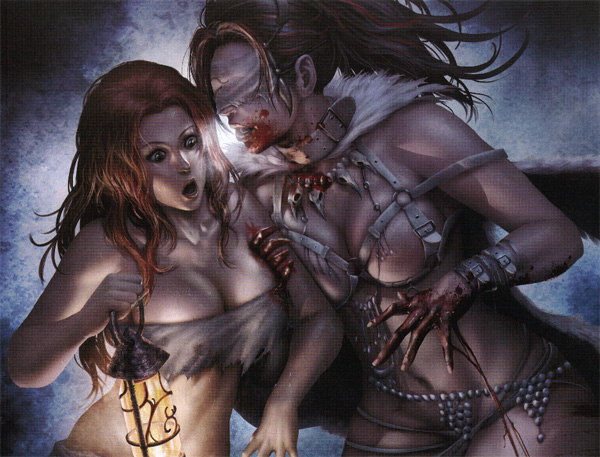 Steve: Wow. I mean, at a certain point, why are you wearing clothes?

Steve: I’m guessing she is not selling shirts.

Steve: Still down with this art though man. The babes are hot, it’s getting creepy, but we’re still in my sweet spot.

Zack: Anita Sarkeesian is not going to be happy with your sweet spot, Steve.

Steve: Aw, c’mon. She is the number one titty hater. 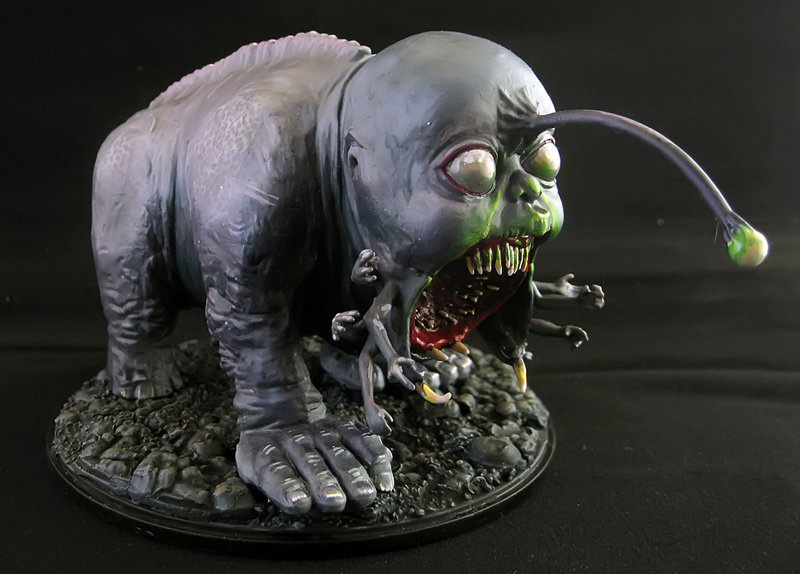 Zack: The monster miniatures are strange and disturbing. And most of them look like conversions even though they are not.

Steve: Lots of extra arms and legs stuck all over the bodies.

Zack: The gameplay in Kingdom Death involves the players as survivors in this creepy apocalyptic realm and they have to form a settlement, build it up, have kids (yes), and hope for good luck on drawing cards.

Steve: But most of the cards are bad luck, so your settlement will get sick or run out of food or whatever. Sometimes a horrible monster will show up and the whole settlement will have to fight it.

Zack: Every “lantern year” the settlement also had to send survivors to fight a monster as the main quest for that year. These monsters are big and each of them has their own “AI” deck of narrative actions they will take when you’re fighting them.

Zack: A turn might be all the survivors attacking a monster, trying to wound it, and then the monster drawing a card that heals all the damage or devours a survivor.

Steve: Dark Souls was a good comparison, but also Call of Cthulhu since it is so easy for survivors to die. There is sanity in the game too. You do get artifacts or crafting materials to make your survivors tougher.

Zack: But probably not tough enough. 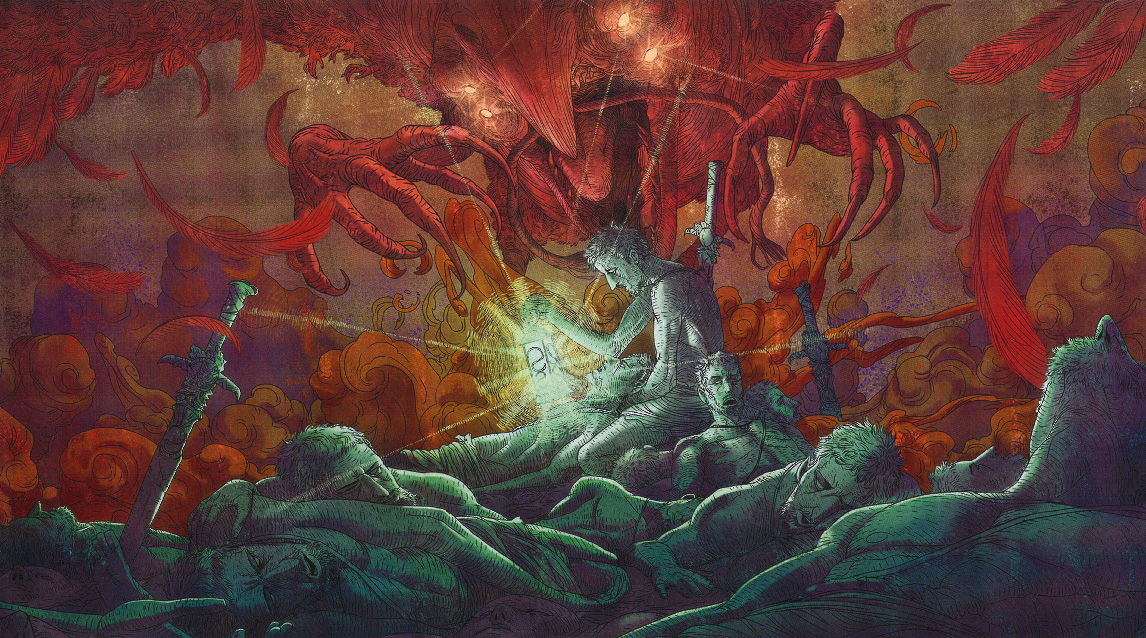 Zack: No joke, I love this artist. Their style reminds me a bit of William Blake’s artwork and the use of colors is amazing and I wish the whole book looked this unique.

Steve: I get what you’re saying, the titty art is super high quality too but the use of anime style on a lot of it sort of robs it of its flavor.

Steve: History would certainly be much hornier. 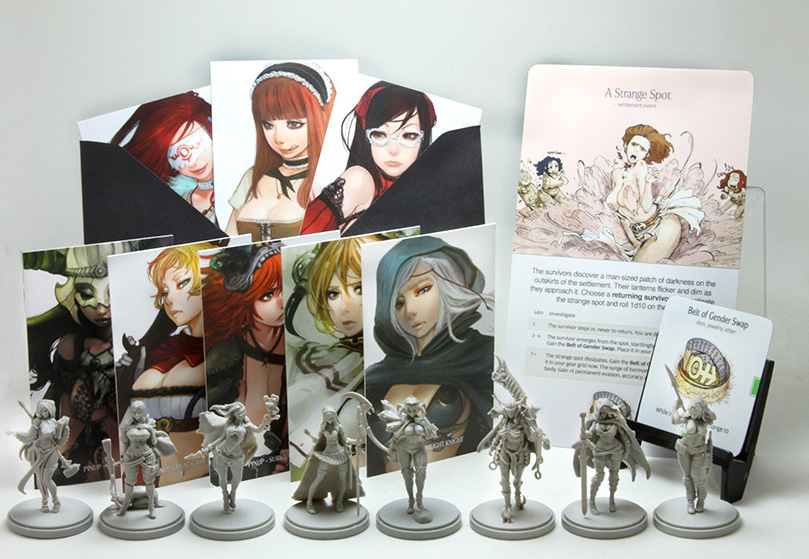 Steve: So one of the more controversial things about this game is that they often release “pinup” figures. These will be big titty versions of various characters in the game, sometimes reimagining monsters as big titty babes also.

Zack: I think we have said titty more times in this one article than in all of our other articles combined.

Steve: This is a mature game full of mature titties.

Steve: Anyway, these are super high-end resin figures, really nice. It’s almost impossible to paint a miniature so it looks sexy, believe me I have painted enough succubi to know, but these unpainted miniatures look sexy.

Steve: This set of eight costs about $300 on ebay right now, but even rarer single figures will go for $100+ for just a human-sized character.

Zack: I sort of get it. If I were to pick up miniature painting again, I would paint like two figures total so I wouldn’t care if they were 25 or 50 dollars.

Steve: If you don’t want to pay the big bucks you can buy the cheap Chinese copies on ebay.

Steve: Seriously. This is a game with numerous counterfeits. 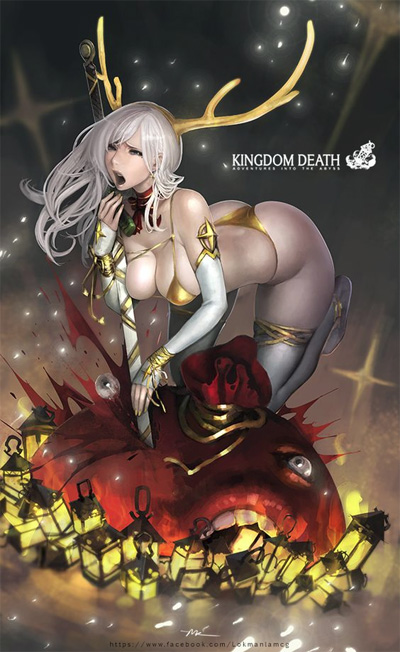 Zack: This is the special Christmas figurine they released.

Steve: Believe it or not, the miniature looks EXACTLY like that image, same pose and everything.

Steve: And it’s nowhere near the most embarrassing miniature released for the game.

Zack: Yeah, that one has to be the Wet Nurse monster. 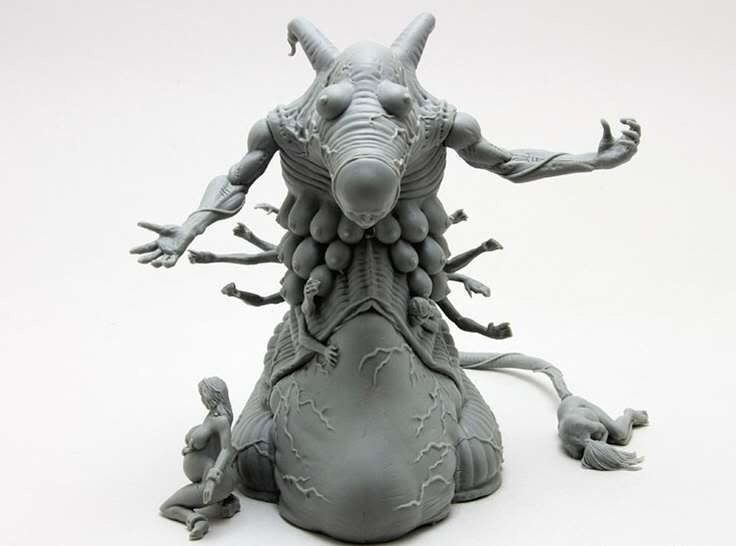 Zack: If it looks like a ballsack and penis covered in boobs, well, that’s what it is. But if it looks like it’s screwing a woman with a tentacle, that’s not what’s happening.

Zack: According to a Polygon preview of Kingdom Death Monster: “When I reached out to Poots to clarify what was going on with the Wet Nurse he explained to me that the tentacle wasn’t having sex with the woman, it was merely feeding off her miscarriage.”

Zack: Just good, clean, fun board game for a Saturday night with the boys. Want to play Scrabble? Catan? No, let’s pay the game with the titty-covered dick monster that eats miscarriages.

Steve: I mean, when you say it like that it sounds a little crazy.

Zack: Keep in mind they have a pinup version of the Wet Nurse that is like a sexy nurse with a breast pump. 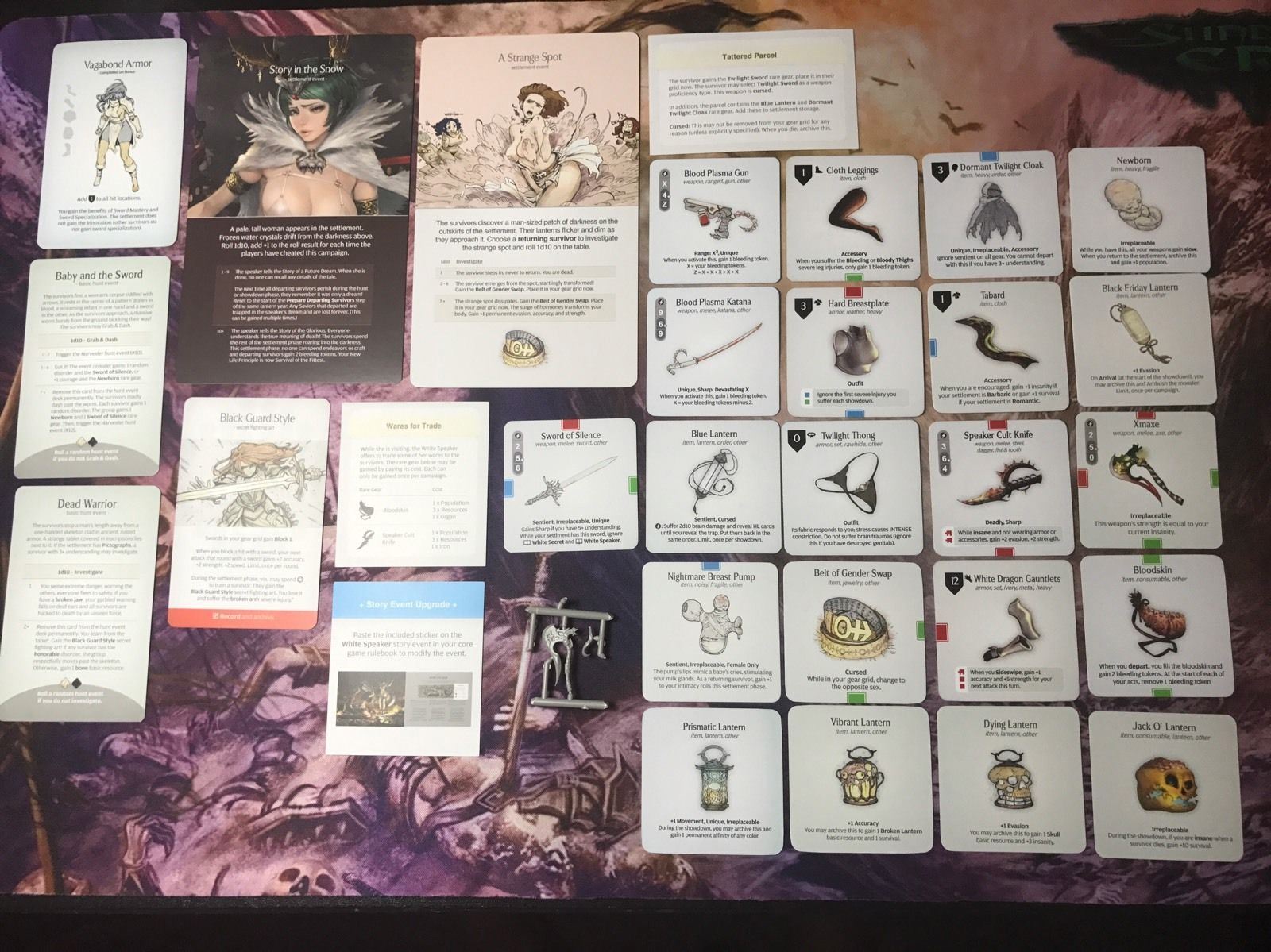 Steve: These are what the game cards look like.

Zack: Yes, as I said before: BOAAARD GAME. 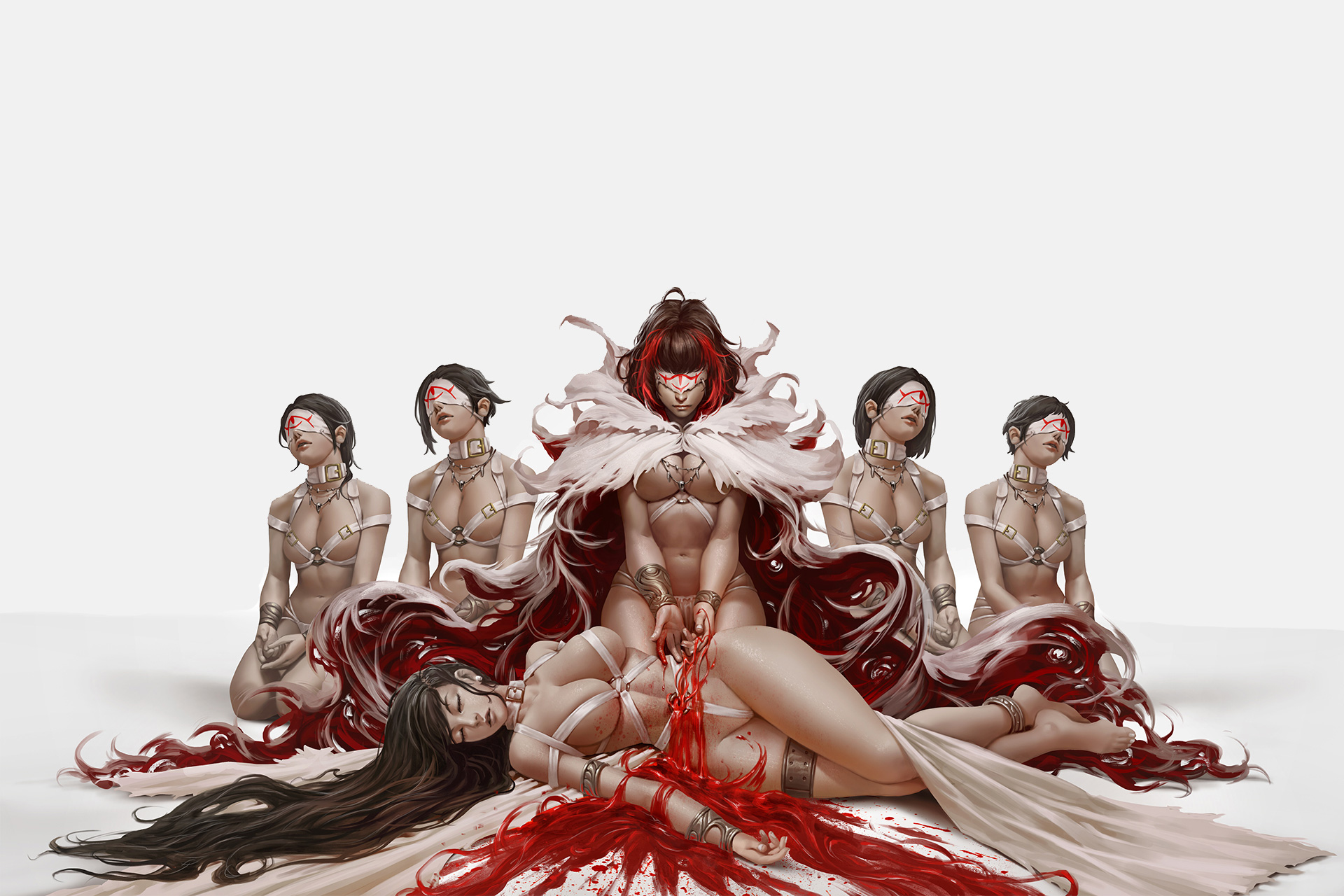 Zack: I get the vibe from a fair amount of the artwork that the people into this stuff are the same people who watch Youtube videos of like all the deaths from Uncharted or Tomb Raider or something. Fetishized violence.

Steve: Oh, don’t get all moral on me about violence too. I don’t think I can handle moralizing on blood and titties. 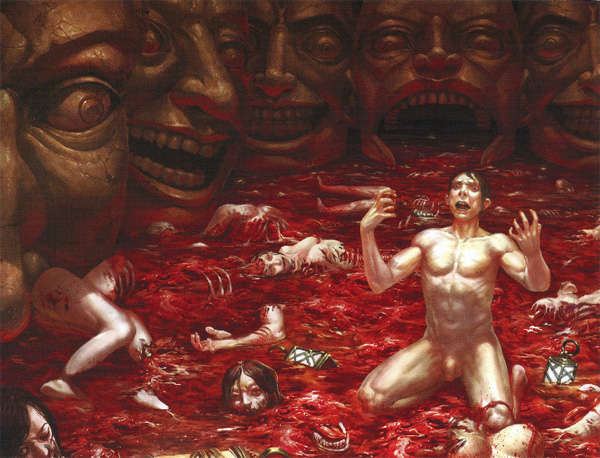 Zack: This is what happens when you try to use the Nightmare Breast Pump. 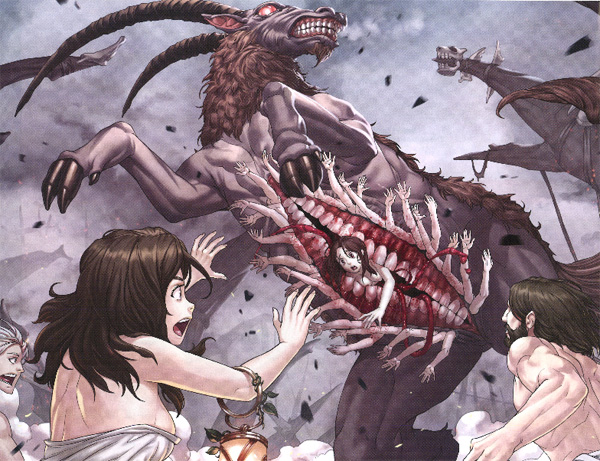 Steve: Before that Attack on Titan anime where people get eaten all the time by skinless giants this picture would have seemed weird.

Zack: Although this is ticking another fetish checkbox.

Steve: I guess it is a little weird to be like actively trying to bonerize people with a board game that they will play with their friends. 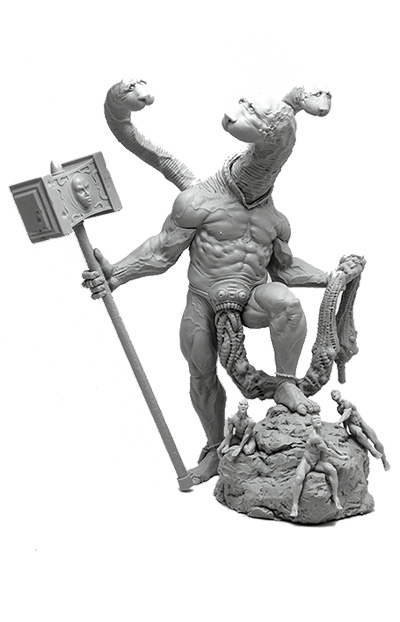 Steve: It’s worth looking at for sure. Lots of bad, but lots of good.

Zack: I’m feeling pretty conflicted. It reminds me a lot of Lamentations of the Flame Princess. The horror stuff really works and the sexuality stuff sometimes works, but then it all veers too much into a territory that feels like it’s the designers getting boners.

Steve: The miniatures are the best detail I have seen before and the designs are unique. One of the monsters is literally a creepy tree. Another one is a lion, but it’s a super creepy lion. And this guy with the guts being puked out of his codpiece. How cool is that dude? It’s creepy as heck.

Zack: I credit them with originality and at times they seem to push the boundaries from board game to art. But then there’s more pinup figurines and anime titties or the godawful boob-covered penis monster.

Zack: I guess neither of us will ever know since we can’t afford to actually play this game.