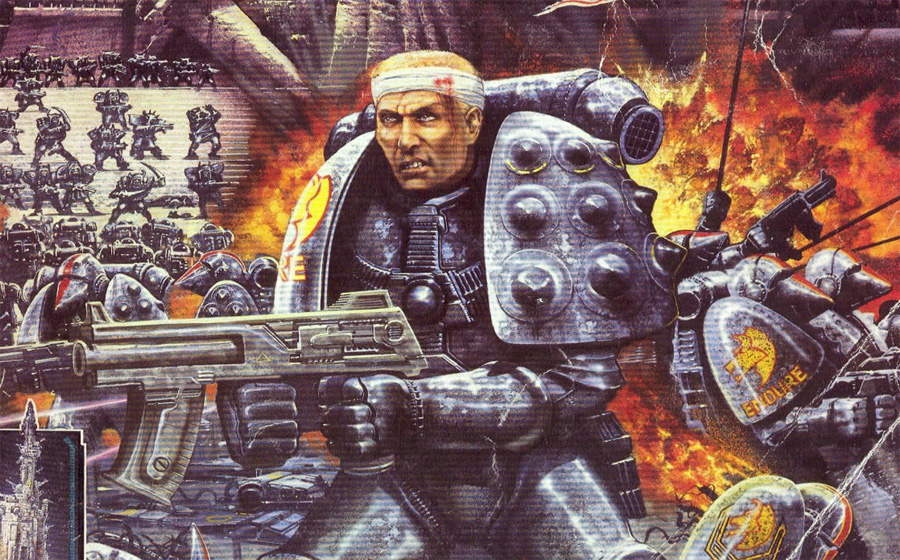 After Rogue Trader, but before 1989’s Warhammer 40,000 Compendium, Games Workshop released a collection of house rules and White Dwarf excerpts called “Chapter Approved: The Book of the Astronomican.” Chapter Approved books would be released periodically for the first several years of Warhammer 40,000’s life, but this very early book was a limited release and is almost forgotten. Hell, we forgot about it when we covered the Compendium. Like just about everything else from the Rogue Trader era, the rules are strange and half-formed, with many interesting ideas that were soon abandoned in the 40K universe. 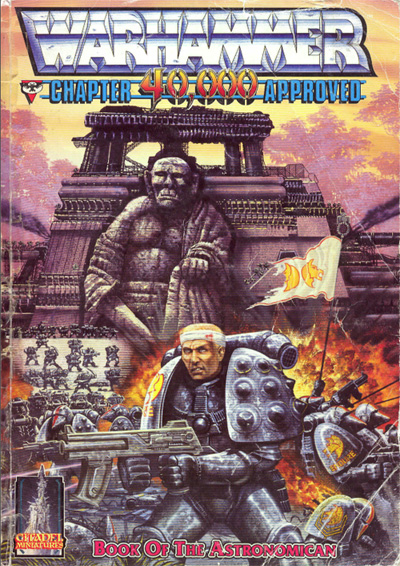 Steve: Returning to Rogue Trader 40K is like reliving my childhood.

Zack: A warm blanket of nostalgia made from catachan devils and loyalist space marines that look like dog-faced demons.

Steve: Remember all the weird miniatures they released in blister packs? Wounded marines, zoats, obsolete types of powered armor. It was great.

Zack: Not really. I don’t even remember this book.

Steve: Oh, I never had this one. My friend Andy’s older brother had it.

Steve: No, they didn’t get along, because of an argument about using unpainted miniatures in Battletech.

Zack: Reminds me of a certain profound tweet by Neil deGrasse Tyson:

Steve: Yes, armed conflict like, you can’t use that unpainted Phoenix Hawk and primer doesn’t count as paint.

Zack: Which side was Keith on?

Zack: The side of justice.

Steve: Even though this was Battletech, the argument is back from Rogue Trader days. Back when it was okay to use Testor’s to paint your Marines bright red and call them the Emperor’s Corvettes.

Zack: Yes, during the era of supreme 40K weirdness, as we will relive today.

Steve: It’s full moon Friday, ladies, so if you see a Wolf Time sticker on a car you put those rears on the glass.

Steve: Wait what is Wolf Time?

Zack: I will let the man himself, Leman Russ, explain: 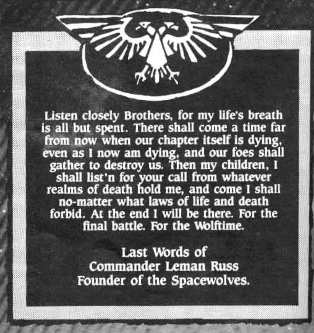 Steve: So it’s like the Rapture for the Space Wolves.

Zack: In the case of this book it’s the title of a campaign of linked scenarios. Which is cool, but only if you play Space Wolves or orks.

Zack: Also the orks in this book are not like the orks that have been around in 40K since the mid-nineties. They’re more like a feudal society and there are a bunch of references to “ork technicians.”

Steve: Yeah, there’s even a super fat Roman-like governor who is in charge of the orks. 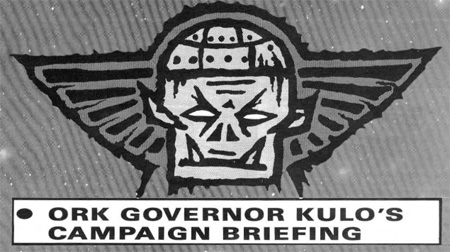 Zack: Just picked my ork business cards up from the printer yesterday. That’s bone. And the lettering is something called Silian Rail.

Steve: Most of the artwork for the orks in this book is done by Tony Hough, so the orks are terrifying and more like cyborg demons than grunting big-jawed imbeciles. 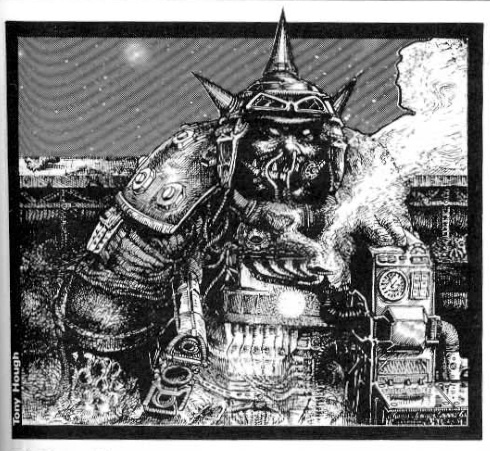 Zack: Well at least Governor Kulo can make the trains run on time.

Zack: This is Trains.

Steve: His job is to guard the pay phone. Kulo has a very important call. 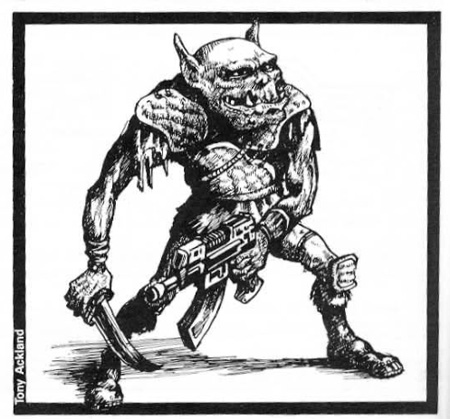 Steve: The best part about this ork is that he looks almost exactly like the first wave of ork figures. This is how weird and silly they really were.

Zack: I definitely remember the metal orks in that boxed set all being skinny and wearing armor that looked like oven mitts.

Steve: Most of them also had dumb hats and/or sunglasses. Orks were very much into shades at this phase of 40K. 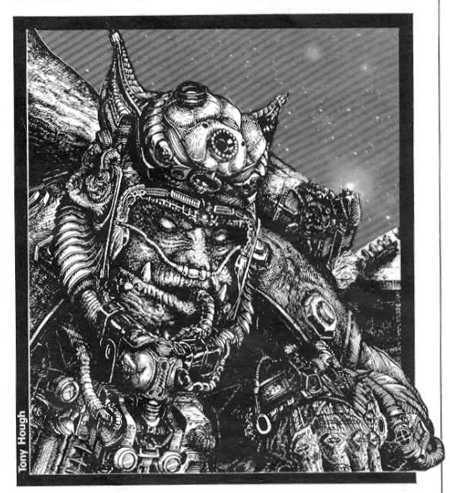 Zack: Whew. Ben Roethlisberger is just being eaten away from the inside by all his misdeeds.

Steve: Yeah, okay, I don’t even know what this one is.

Zack: It’s Tony Hough again so this is probably a cook or a bartender or something.

Zack: The man makes everything horrifying.

Steve: Basically all of the Adeptus Mechanicus used to be Hieronymus Bosch nightmare skeletons and now they are just regular old skeleton robots. 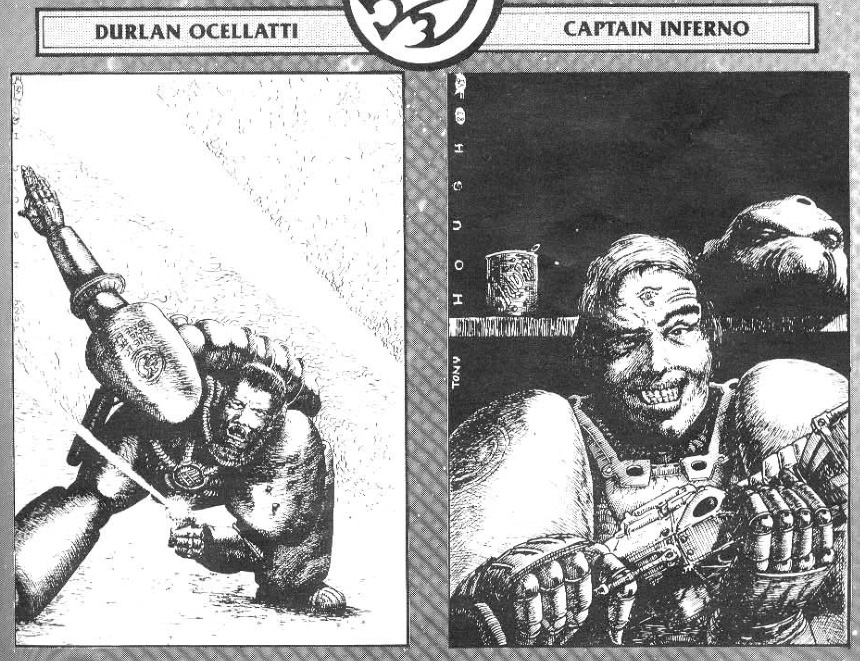 Zack: The book features portraits of the leaders of the two opposing factions. The Space Marines get these two charmers.

Steve: Aerobics Marine and Charles Manson in the locker room over here.

Zack: Are you boys ready to SWEAT for the EMPEROR? Come on, feel the burn! Cleanse the xenos! And one, and two.

Steve: The 19th organ they implant into Space Marine is the rhabdoid gland and allows recruits to do crossfit until all carbs have left their bodies.

Steve: Yeah, that’s called “The Oldies” and the marines love them, thank you. 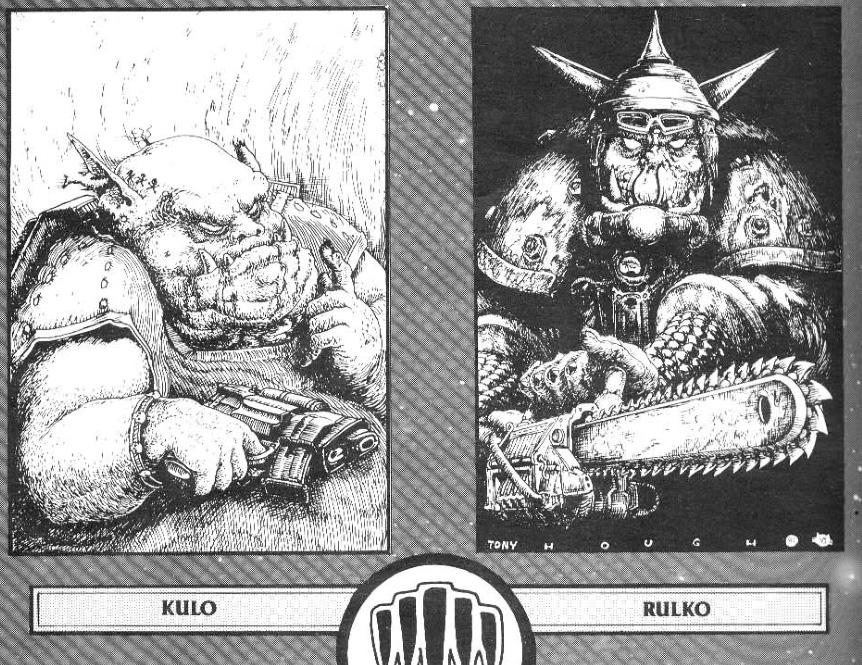 Zack: Kulo needs to get a steam telephone and an oven mitt shirt or something. His style is not on point.

Steve: Rulko has it down. Forget about chainswords, quit being fancy and get a chainsaw.

Zack: Do you think these guys have what it takes to defeat fitness marine and Mansonicus?

Steve: The leader of the orks is named “ass” I don’t think they have much of a chance at all.

Zack: Yeah, but it’s Wolf Time, right? Like you said, put those Kulos on the glass. 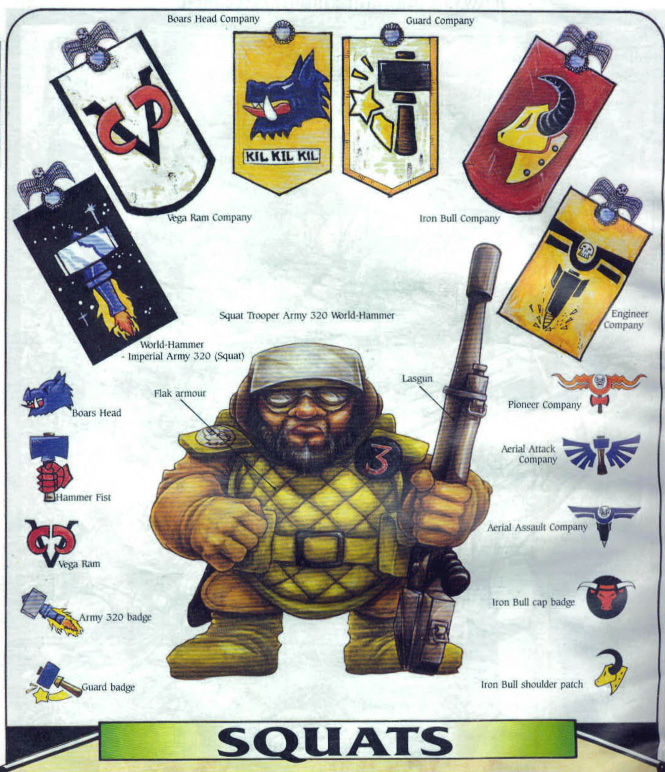 Zack: Is he wearing sunglasses and he has a visor on his helmet?

Zack: And the full-torso oven mitt? The orks have nothing on the squats.

Steve: I like how when you get short you also forget how to spell very simple words like “KILL.” 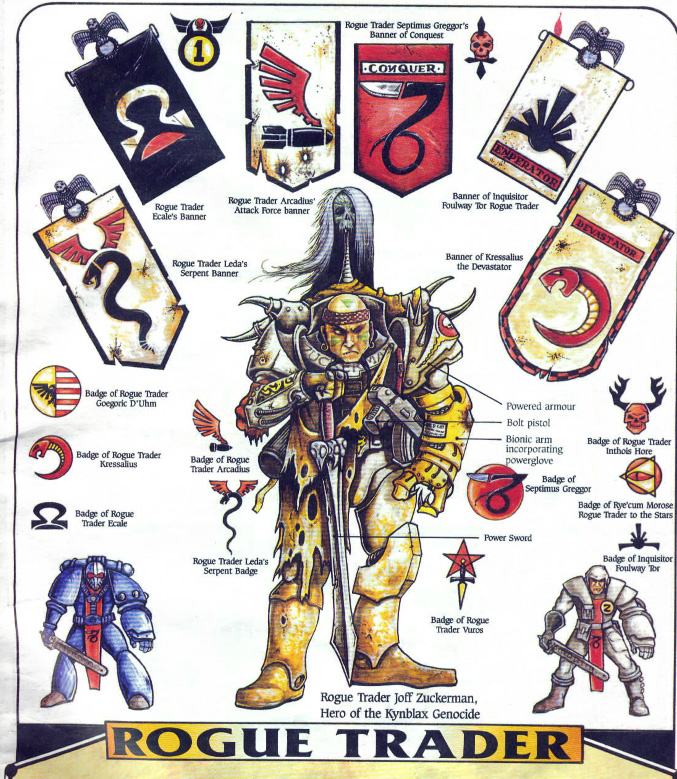 Zack: This poor guy just looks like he wants to be left alone.

Steve: Man, the concept of rogue traders flying around space discovering weirdness and the Ian Watson Inquisitor novel are like 100% early 40K for me. That novel was so bizarre. It was like a plot within the Imperium to have some sort of chaos tentacles everywhere and I vividly remember that at one point they went to earth and spent like a month walking through the Imperial palace and then they got to meet the emperor.

Zack: Nowadays you get Horus arguing about shit on a spaceship for ten novels during the Horus Heresy.

Steve: All of those books suck. They took one event that would have been amazing in like a novel or a trilogy and spread it out over 50 novels where you get whole books about stupid side characters. Like I don’t need three novels about the primarch of the freakin’ Night Lords.

Zack: Oh, you mean Konrad Curze also known as the Night Haunter who lived on the nightmare world of Nostramo and became a master of terror?

Steve: No, some other Night Lords primarch. 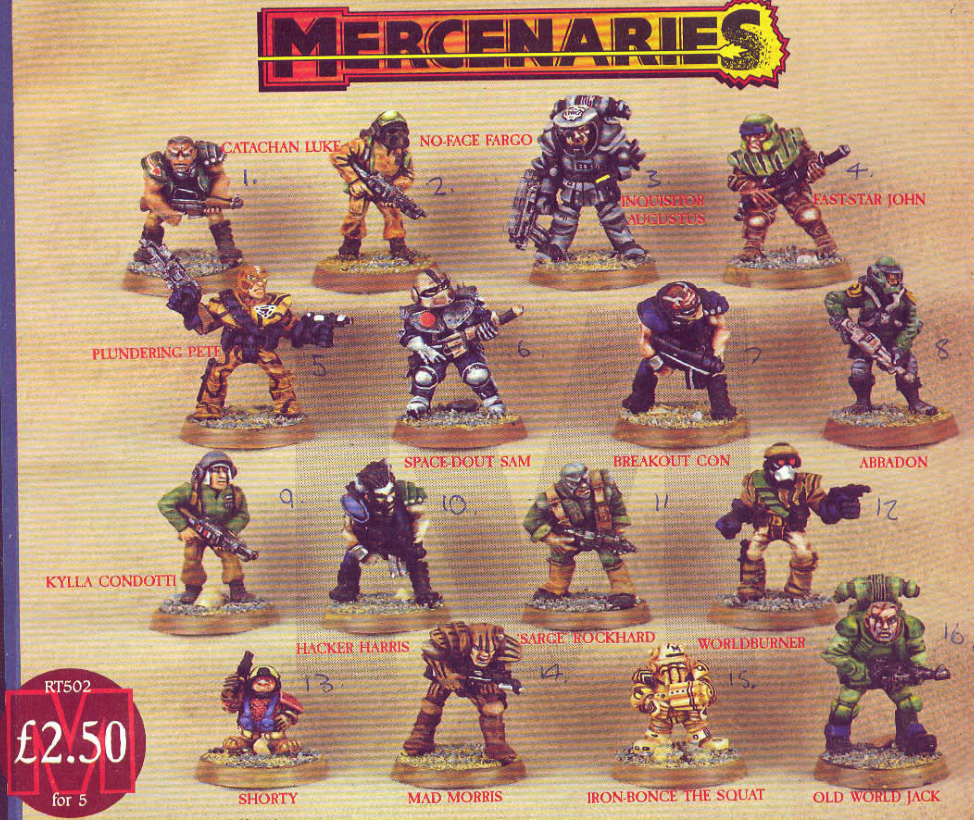 Zack: 2.50 pounds for 5 Games Workshop miniatures is insane. You couldn’t even get 5 plastic miniatures for that price now.

Steve: To be fair, these look like they were sculpted with Play-Doh.

Steve: But I totally freakin’ love them. I even had that Inquisitor dude.

Zack: “Uh, yeah, my name is Inquisitor Josh. I am totally the emperor’s right hand. So watch out, evil.”

Steve: Josh could be an Inquisitor. Abbadon was way less intimidating back then. 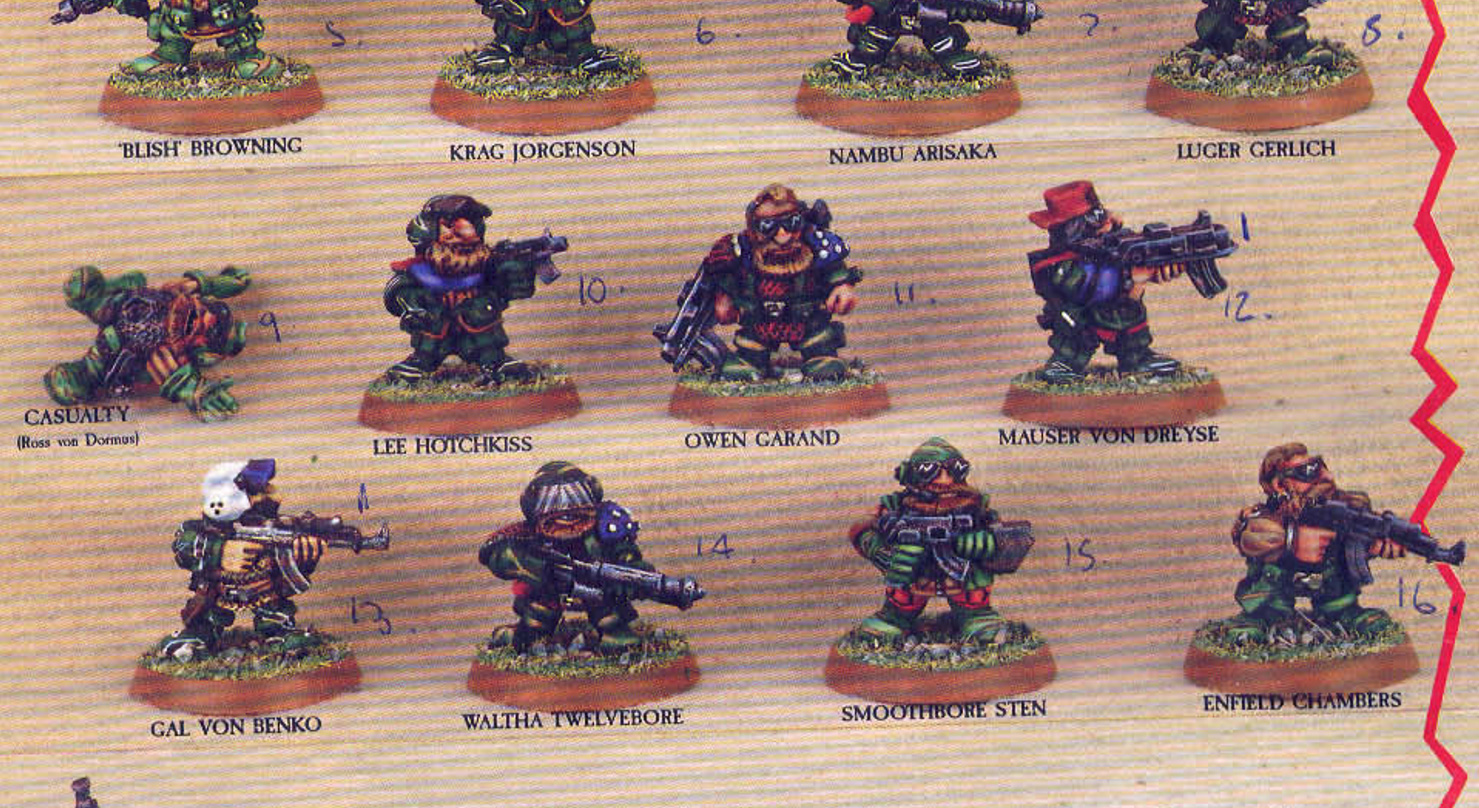 Steve: Needless to say, I love these too.

Steve: Yeah? Well, you can call me Abbadon. I sell laser guns that looks like bent trombones. 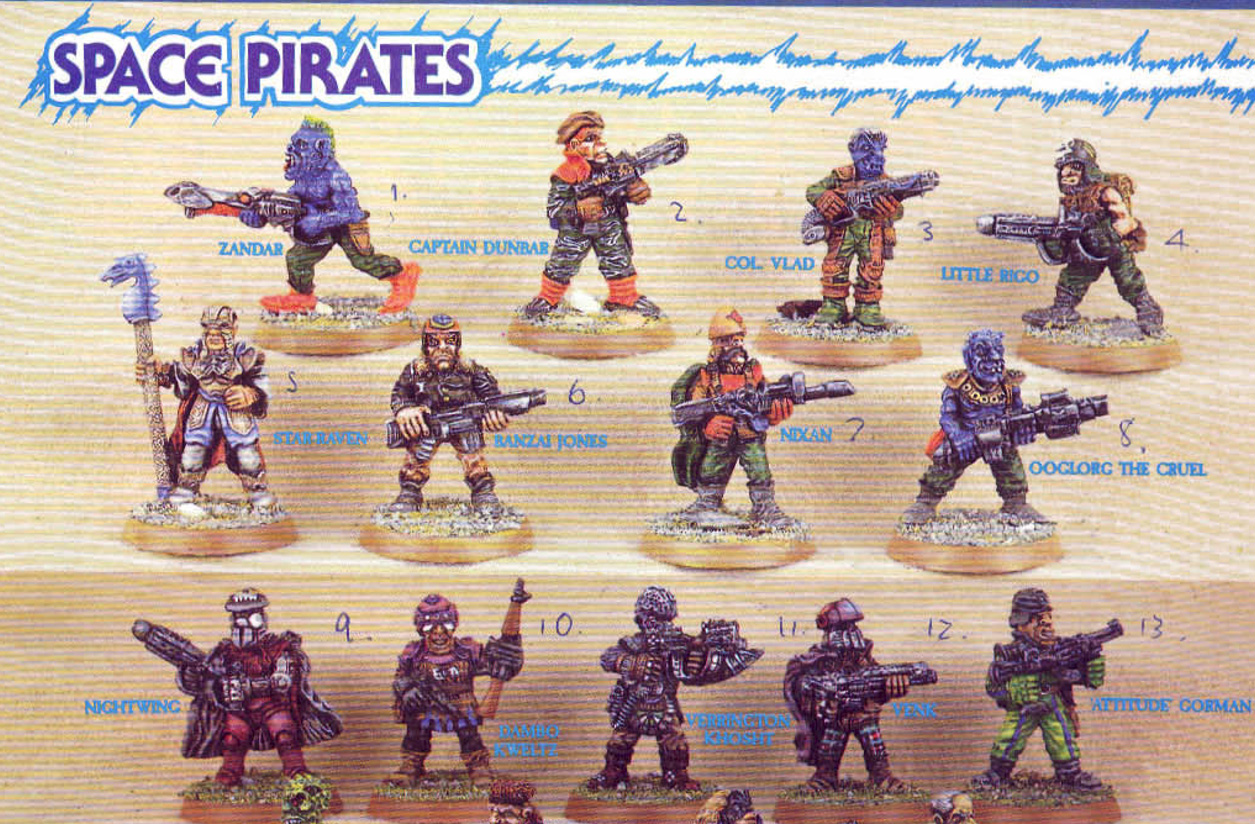 Zack: Be sure to enlarge this picture to look at the full image.

Steve: Holy crap. I have literally never seen any of these. I feel like those weirdos on Reddit who insist Sinband was a genie in a movie called Shazam.

Zack: Captain Berenstain, at your service.

Steve: I’m seriously freaking out. I’ve never seen any of these. What even are those blue guys?

Steve: If I was playing in a tournament and the guy I was up against started taking an army of these guys out of his case I would seriously just forfeit to him.

Zack: You know the vehicle for them has to be that weird deodorant hover tank thing from the Compendium.

Zack: Corwen Quilp: his cloak look like a dish rag.

Steve: I miss this stuff in 40K

Zack: What? I would say stuff like a field notary definitely had its day in 40K back in the early 2000s. There were all sorts of scribes and book-havers that you could field in the game.

Steve: Yeah, but there were good rules for them. I just want some useless dumb dude to wander around taking notes during a battle.

Zack: It’s not dumb it’s called an after action report and people love them.

Steve: Hey! Please support our Patreon! I know we flaked out for a while but we are back every other week now and could use the support.

Zack: Thanks for sticking with us!