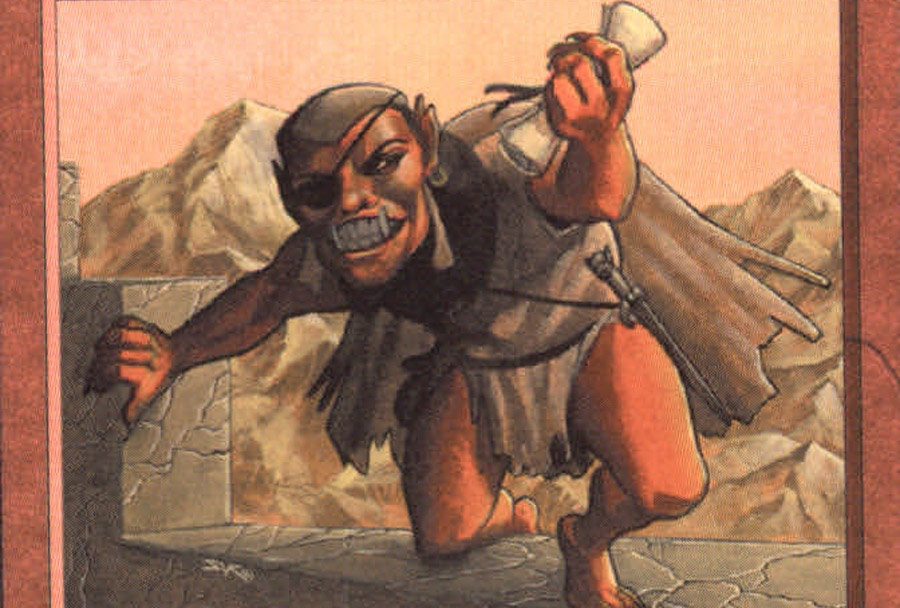 Released during the early heyday of Magic: The Gathering, Fallen Empires was one of the sets rushed out in the mid-nineties to cash in on the collectible card game craze. The concept of focusing on several empires that had fallen into ruin as the Ice Age (set) approached was not bad, but the results were uneven and the cards were not particularly useful for players. As you will see, the set also features some truly silly artwork. Fallen Empires was released shortly before what is widely regarded as Magic’s worst expansion, Homelands, and while it is not as uninspired or useless as that one, it manages to be terrible in its own right.

Zack: I think I had already quit playing by the time this set was released.

Steve: Man, it was still getting good back in ’94. The Ice Age hadn’t even happened yet.

Zack: Wait, maybe I skipped a few then, I think I had some of those cards.

Steve: They were critical man. You couldn’t skip Ice Age.

Zack: I remember at a certain point walking into a hobby shop as a teenager to buy Magic cards and seeing eight year olds playing it and being like, “What am I doing with my life?”

Steve: Oh, yeah? And did you walk into the concert hall and see a five year old playing the cello and say “What am I doing with my life?”

Zack: Well, yeah, but for almost the exact opposite reason.

Steve: The opposite of wanting to miss out on one of the most rewarding hobbies a man can enjoy because a child can also enjoy it?

Zack: No, that’s not right and not what I mean.

Zack: Let’s not get bogged down in my regrets about quitting piano lessons as a kid because I didn’t like sitting on the piano bench next to my weird-smelling old lady piano teacher.

Zack: To all the empires we have lost, we salute you! 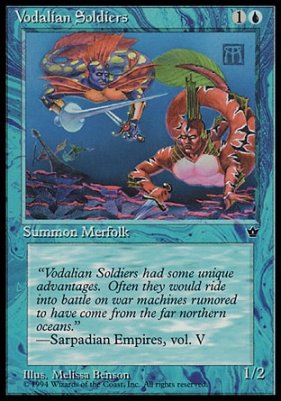 Zack: Not so sure about using cavalry lances underwater.

Zack: We don’t have time to get into all my problems.

Steve: Ever seen a narwhal?

Zack: I have to push them out of the way to get where I’m going.

Steve: Then you should know that narwhals have giant unicorn horns on their foreheads which are actually like a tooth if I remember correctly.

Zack: I stand corrected by the narwhal expert.

Steve: Someone has to stand up for the ideals of undersea impalement.

Steve: Actually, maybe I’m thinking of swordfish that do that.

Zack: And they use a SWORD so I win this argument, Steve. Now look who is an idiot. 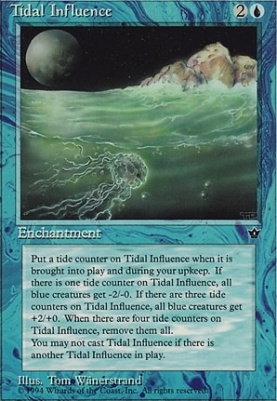 Steve: I don’t see anything wrong with this one.

Zack: The artwork is fine, but I wanted to include it as this is an example of a set where the amount of text and arcane rules on the cards started to get to be too much.

Zack: That is nine lines of small-sized text and includes counters as part of the rules.

Zack: Any card that forced you to bring in additional equipment was BS. I don’t want to try to keep track of someone else’s weird card rules.

Zack: Oh great this guy’s gnome toilet card that keeps shitting out glass bead counters onto my pipes of urza and causing them to be clogged which allows him to swamp walk his sewer alligator card right past my growing wall of grave junk I made with counters from my graveyard creatures with nine counters of crudbump’s wall curse on it. 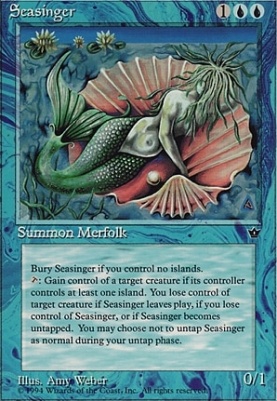 Zack: I’m sure Amy Weber is a good artist and maybe this was direction from Wizards, but covering a monster’s face with hair just makes me think of comic book artists who can’t draw feet always having their characters stand conveniently behind rocks or other debris.

Steve: Or they are always are holding a sword or gun because you can’t draw hands.

Steve: Which is what I do.

Steve: For feet I use the classic technique of one foot straight towards the perspective and one perpendicular.

Zack: You should teach an art class.

Steve: I’ve thought about teaching a history of barbarian artwork at a community college.

Steve: Yeah and the huge swastika might raise some eyebrows but it’s a prison thing. Bruce had to pick sides behind bars. Now that he is on the outside he harbors no ill will for any race.

Zack: Maybe get that tattoo covered up. Dutch windmill or something.

Steve: The bummer is one of the hot barbarian babes is a Valkyrie sort of babe holding the swastika.

Zack: So turn it into the Krull blade and the redheaded babe from Krull.

Steve: Heck YES going to pitch that to Bruce for sure. 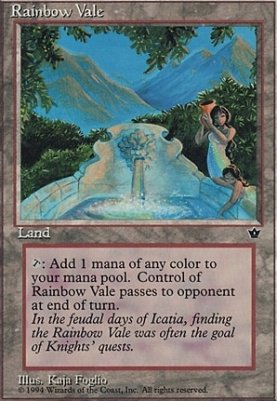 Steve: Whatever the art is fine on this but the card is so stupid.

Steve: It gives you one mana of any color and then you give it to someone else. Cool. Thanks for the trash card that will never go in my deck.

Zack: You could make a deck that uses only Rainbow Vale as lands and then give your opponent all your land cards and they just never tap them.

Steve: There is probably someone who has built that deck and used some other weird rules card that causes someone to tap all their land and then kill them with a mana burn.

Zack: Always loved how Magic would put out cards with stupid rules and then almost immediately revoke the cards as illegal.

Steve: It has to be that way or else people would come up with unbeatable trick decks. 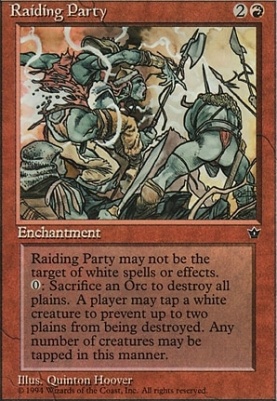 Zack: I’m sure some upset moms slammed this card down on hobby shop counters.

Zack: “What is this FILTH you are selling my baby?”

Steve: Sure, there will always be upset moms in hobby shops. “My kid glued his nostrils shut again” or “my son ate some old lead wounded space marine figures and now he punches holes in walls” but I was more concerned with the garment the orc is wearing.

Steve: That just looks awful, dude. Like agonizing to wear.

Zack: And to think women do this to themselves to please us all the time.

Steve: I refuse to feel guilty for asking women to kill orcs. 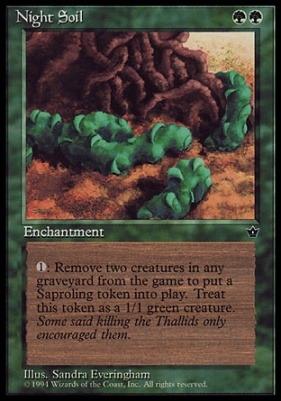 Zack: I was joking earlier about the poop tokens from the gnome toilet and here we are: literal shit tokens.

Steve: I wonder what the instructions were for the artist.

Zack: “Y’all know what a poop looks like? Hows about a pack of them, but green it up.”

Steve: Liking the idea of the Wizards art director being a cartoon Texan. 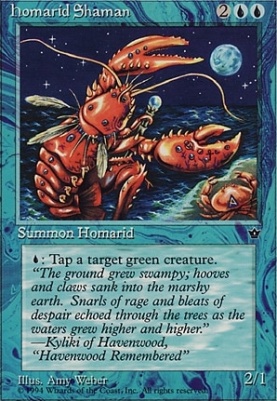 Zack: Makes me desperately want a pet lobster so I can make him a necklace.

Steve: You could make a bunch of them and sneak them onto the lobsters in the tank at the Red Lobster.

Zack: No the staff at Red Lobster watch me like hawks ever since I protested lobster fest.

Steve: What, because it’s cruel to the lobsters?

Zack: Cruel to THEM? It’s not fair to US, Steve.

Zack: When are white men going to get our lobster fest?

Steve: I’m sure there are plenty of people who would be happy to boil white dudes and dip them in butter.

Steve: I feel like we’re entering a time where you have to start having winky face emoticons when you joke around like that. 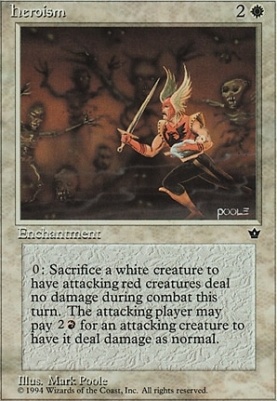 Zack: This looks like an animation cel from Masters of the Universe.

Zack: The forgotten episode where He-Man has to carry his baby through the cave of spooky skeletons.

Steve: Also, who did He-Man have a baby with? Teela? Sorceress?

Zack: Oh, hell, no. Those are side rides. He-Man needs an actualized woman to be the mother of his kids. He was only dropping babies in Evil-Lyn.

Steve: So how did he end up with the baby?

Zack: Hit rock bottom and cut it out of her to sell it of course.

Steve: I think this might be a dream you had.

Zack: It’s called the American dream, Steve, and there was a time we all had it. 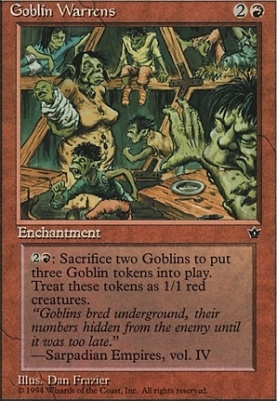 Steve: This is what Trump people think Mexican immigrant houses look like on the inside.

Zack: So racist. And totally wrong. There would be tile in the living room.

Steve: Goblins also apparently eat each other to make babies which does not seem like a very sustainable reproductive cycle.

Zack: We need a wizard who is going to build the dang brass steam crab and send it down into the goblin tunnels. 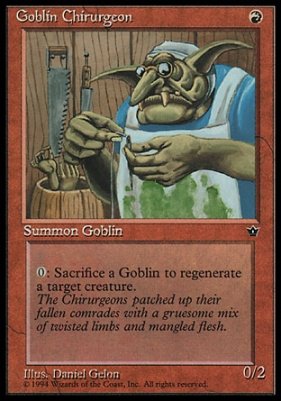 Steve: The political jokes write themselves on this one.

Steve: I meant like “Obama said you can keep your doctor” or “The Republican healthcare plan, folks.”

Zack: What you meant isn’t important. The audience is free to interpret the joke on their own terms free of context or intent.

Steve: What context?! I didn’t even make that joke! What joke?

Zack: Norms are changing in America, Steve, but one thing both parties agree on is don’t you dare say anything bad about Henry Kissinger.

Zack: Definitely never compare him to an ugly, soulless goblin who spent the last 50 years scuttling around US government and playing with blood. 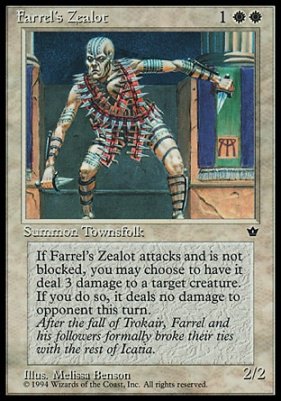 Steve: “Hey, any of you seen my knife? I had it a second ago and I can’t remember where I set it down.”

Steve: “Oh, wait… duh. I should have looked in both of my hands and literally any other possible location.”

Zack: “They said not to bring a knife to a gun fight, but how about 86 knives? That has to be as good as one gun, right?”

Steve: Not to the NRA. They don’t give a crap about knife owner’s rights.

Zack: Come on, I don’t think when the founders wrote the Constitution they could have imagined someone would put like a saw blade on a knife and make the knife blade black.

Steve: Ben Franklin totally did imagine that. Ben Franklin was probably picturing heat rays and chainsaws when they wrote the Constitution.

Zack: He was 100% thinking about having sex with prostitutes the whole time. 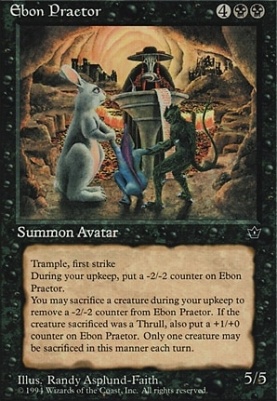 Zack: Never get a divorce.

Zack: You would, Steve. You would.

Zack: Family court never thinks of the rights of the devil.

Steve: I don’t trust how a devil would raise a naked lady.

Zack: Like the Easter Bunny has some biological understanding of naked ladies that the devil doesn’t have?

Steve: Yeah, I think so. A+B= Eggs come out of rabbits.

Zack: The Easter Bunny never would have been able to lay the egg that the naked blue snake girl hatched out of without the devil.

Steve: He didn’t carry that snake girl for nine months.

Zack: Neither did the Easter Bunny. It was three weeks and then egg in the basket.

Steve: The devil didn’t put all the candy in the basket. 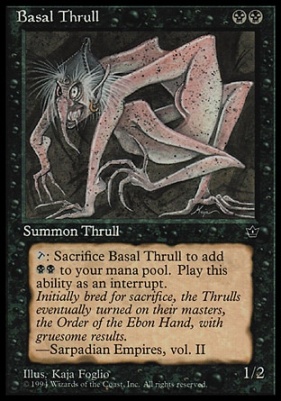 Zack: Thanks for reading about another batch of bad Magic cards!

Steve: Next time, I am going to run Heroes Unlimited. I don’t want to give away too much about the setting, but it’s futuristic and disturbing.

Zack: Yes, that’s right, I am going to play a mutant with a super stretchy, indesctructible body in Gilead from The Handmaid’s Tale.

Steve: No, that’s not the setting!

Zack: Ofsteve is about to get some revenge.

Steve: Thanks for supporting us on Patreon! Your contributions help keep our stupid website thing going!

Steve: We were just talking about making necklaces for lobsters.

Zack: We are in the post-reality era where the only thing that matters are declarative statements. And we did not talk about lobster necklaces.