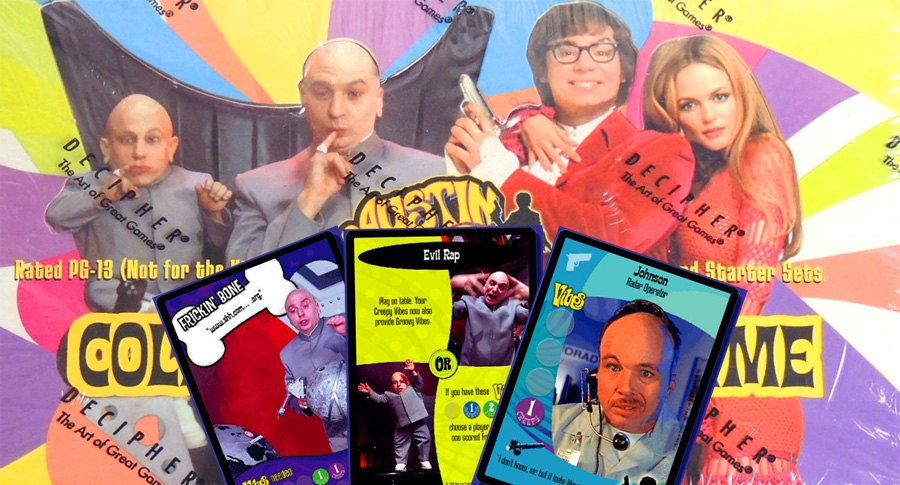 Austin Powers: The Spy Who Shagged Me was released in 1999 to minimal acclaim, but enough box-office that a few years later it merited another sequel. It also evidently merited a collectible card game. Magic: The Gathering and Austin Powers were both at the height of their respective popularity that year. That might explain why someone at the game company Decipher decided the world was ready for some brand convergence. The result is exactly as embarrassing as you are thinking.

Zack: I am guessing you are way into Austin Powers.

Steve: Not lately. I gave up on there ever being a part four by about 2015.

Zack: We live in an era of perpetual reboots. There is no reason not to hope for more.

Steve: No, I’ve made peace with it. I feel like they said everything they needed to say with the original trilogy. Mostly “Yeah, Baby!” over and over.

Zack: Well, at least we can still tell our Austin Powers stories with the help of this amazing card game. 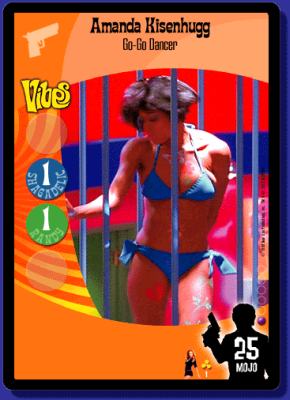 Zack: Ah, yes, that Austin Powers character we all know and love best.

Steve: Why does the picture look so bad?

Zack: Like a lot of TV-show spinoff CCGs, this one just took still shots from the source material.

Zack: But I’m guessing this was a background character or something.

Steve: So the stats or “Vibes” are Groovy, Shagadelic, Randy, and Creepy.

Steve: And from what I can tell things cost mojo or money depending on whether your are playing a good guy or a bad guy.

Zack: That all sounds believable.

Steve: It doesn’t seem very complicated, but I feel like we’re still missing some idea of how the game is played.

Zack: Fortunately for us there has never been a human being who wanted to play this game, so we don’t actually need to figure out what we’re missing. 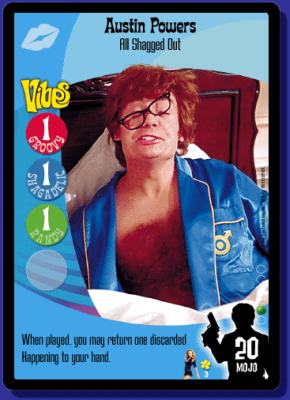 Zack: One of the best things about being an SNL cast member from the 90s must have been turning yourself into some weird sex symbol.

Zack: Mike Myers established himself as having sex with basically every hot woman he could think of, David Spade is banging Brittany Daniel in Joe Dirt, and people like Adam Sandler make Salma Hayek their wife.

Steve: Well if you were a comedian with movies isn’t that what you would do?

Zack: No, I respect women far too much.

Zack: I consider myself something of a Joss Whedon.

Steve: Does that mean you’re a feminist? 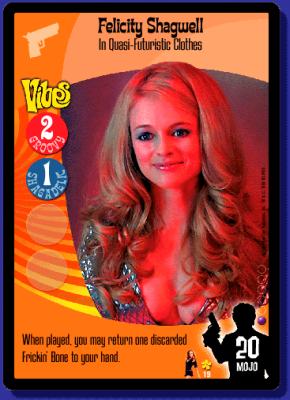 Steve: I have pictures of my grandma looking exactly like Heather Graham.

Zack: Oh? Do they make you randy, baby?

Steve: I did say “Dang, grandma was hot.”

Steve: Which is weird because for as long as I have known her she has looked like a potato wearing a white Moe Howard wig.

Zack: Time is the great destroyer. It turns us all into potatoes.

Steve: Except for the Cenegenics grandpa. 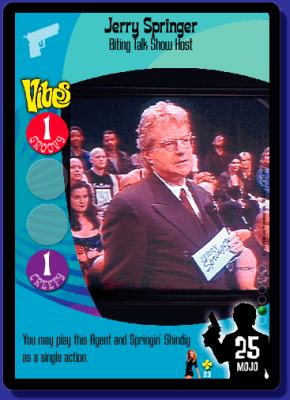 Zack: Jerry Springer would probably make for a more interesting card game than repeating all the Austin Powers jokes on a variety of ugly cards.

Steve: Heck yes! Remember how he would have food fights on his show?

Steve: He would have a whole Thanksgiving dinner set out on a table and then have a KKK dad whose daughter was pregnant with a black guy’s baby or something and then they would start throwing turkey legs and mashed potatoes around.

Zack: The best part of Jerry Springer was the final thoughts where he would offer some earnest, direct-to-camera advice right after he had a 400 pound woman getting her wig pulled off while people threw chairs.

Steve: Didn’t he have some sex scandal?

Zack: Oh god yes. Jerry Springer has the best sex scandal. Long before his show, he was on the city council in Cincinnati and he got caught paying a prostitute with a personal check.

Steve: I do remember that! Can you imagine the reaction of the prostitute?

Zack: I think it was back in the 70s when people actually paid for things with checks, but still.

Zack: It ain’t Checks Rule Everything Around Me, Jerry. 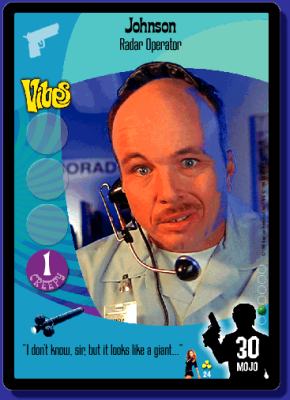 Zack: All of the goblin folk in Magic are clearly modeled on Clint Howard.

Zack: That world famous sexy man Ron Howard. Men want to be him and women want to be with him. And those are the only two genders and persectives allowed to relate to Ron Howard.

Steve: Nobody can even concentrate on the Han Solo movie set now because Ron Howard is throwing around all that hotness. 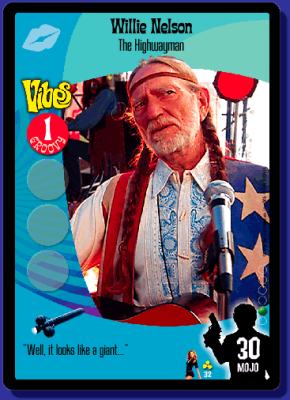 Zack: Looks like good old Willie Nelson is one of the weakest pieces of shit in the game.

Steve: I barely remember him being in Austin Powers. I’m sure he wasn’t a weed joke.

Zack: No way, that never happens.

Zack: Weed is so funny.

Steve: I love it when people smoke a drug and that makes me laugh.

Zack: It’s the good drug, Steve. The whole family can laugh together. 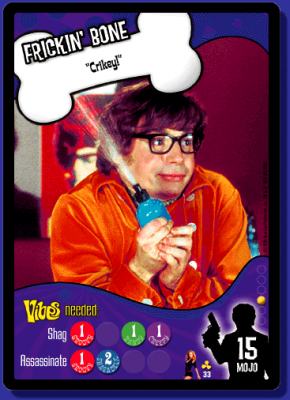 Zack: I hate this so much.

Steve: The Frickin’ Bone cards are like the actions your agents can undertake.

Steve: Both sides have different Frickin’ Bone cards, with costs to shag or assassinate.

Zack: I still hate it, Steve.

Zack: No! No they are not. I hear “Frickin’ Bone” in that horrible Doctor Evil voice and I hate the shit out of it.

Steve: I am sorry to say that you are going to be seeing a lot of “Frickin’ Bone” before we are done. 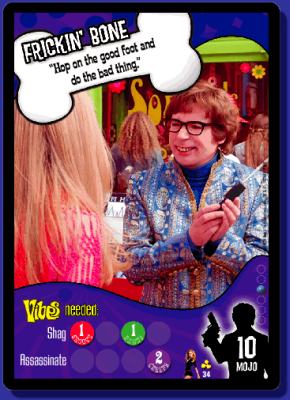 Zack: “Hop on the good foot and do the bad thing”

Steve: I don’t know what it means.

Steve: It’s not that bad.

Zack: No, it is. Why are we doing this to FUCK I just looked at “Frickin’ Bone” and heard the Doctor Evil voice again.

Steve: Maybe it will loop back around and start being funny again?

Zack: Don’t. Hope is the cruelest thing of all. 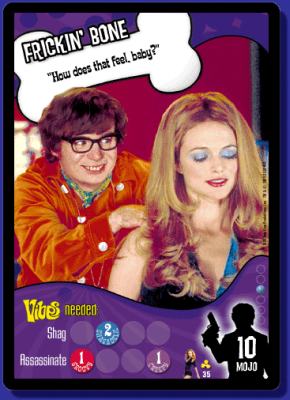 Steve: There’s not a joke here either.

Zack: I would rather there be no joke at all than one that doesn’t make sense or some horrible FUCKING SHIT bULLSHIT I just looked at Frickin’ Bone again.

Steve: We could pixelate it out on every card?

Zack: No way, that would mean I would have to look at it even more.

Zack: I am going to be having Doctor Evil Frickin’ Bone nightmares as it is.

Steve: I can hear it too but I sort of like hearing it in my head.

Steve: Please stop saying the f-word so much. 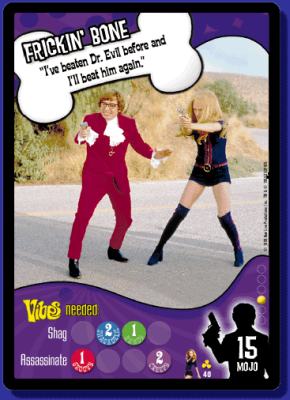 Zack: Alright, this isn’t so bad.

Steve: I think this is where they killed Mustafa.

Zack: No way, we’re not talking about it. Not giving me a chance to see those words. 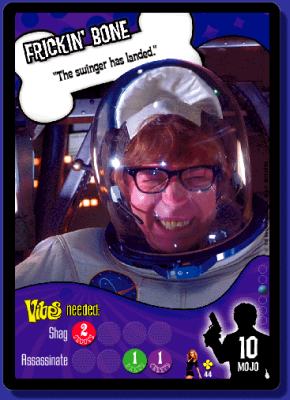 Zack: I looked at his face and it made me angry and so I looked away and I saw Frickin’ Bone again. And I heard it in my head.

Steve: You’re torturing yourself, dude, you need to give in to the Swingadelic fun, baby.

Zack: Shut the fuck up.

Steve: Do I make you angry, baby?

Zack: I want to see Austin Powers decompress violently into that helmet.

Zack: Byford Dolphin that motherfucker until he looks like someone swung a bag of ground pork against a concrete wall. 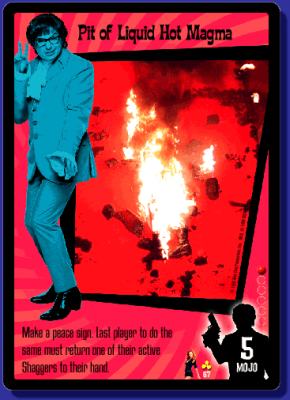 Steve: You are revealing more about yourself than about Austin Powers with all this uncontrolled rage.

Zack: This rage is very controlled.

Zack: This is focused rage.

Zack: There are circles of hell for whatever this is you are doing to me. 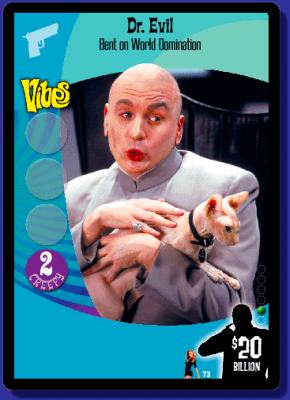 Steve: Dr. Evil is one of the greatest characters of all time.

Steve: Which one are you?

Steve: I think I am either a hero or a randy babe.

Zack: The mistake Campbell makes is not realizing that a hero can be both. 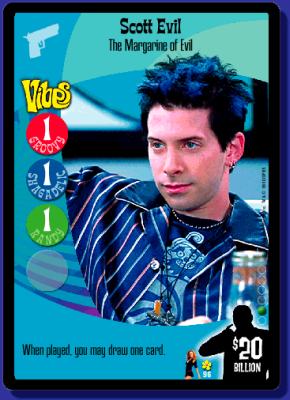 Zack: Seth Green was smart to get away from the camera.

Zack: Well except for Beyonce who is basically the least disappeared a human can be without being Donald Trump.

Steve: Oh man, can you imagine how good Austin Powers would be riffing on Trump?

Steve: How is he racist?

Zack: Motherfucker how did you erase the Love Guru from your mind? 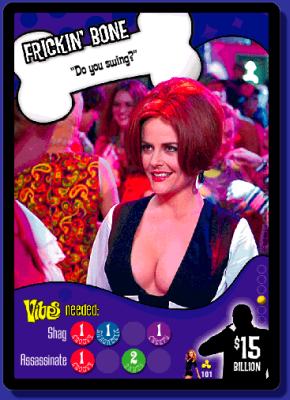 Zack: That’s something at least.

Steve: She has amazing hooters, but I can’t help remembering how gross she gets when she is like burned and shot multiple times.

Zack: Oh god that’s right he falls out a window on top of her or something.

Steve: She gets shot with a bazooka. 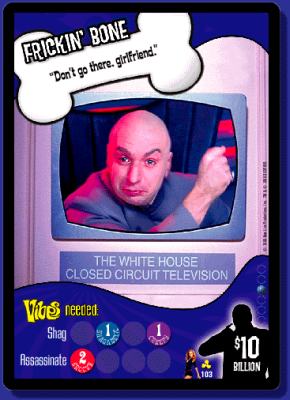 Zack: Much of Austin Powers ages about as well as Shrek, but this one is particularly egregious.

Steve: Shrek is a family classic.

Zack: The more something relies on pop culture references for humor, the less it will stand the test of time.

Zack: People think the Internet is forever, but it is an entire world built in sand.

Zack: When the government uses the EMP to disable the power grid and institute the FEMA camps the Internet will be nothing but a memory.

Steve: People will still remember all of your jokes on twitter about Sonic the Hedgehog being pregnant.

Zack: Sonic mpreg is no joke.

Zack: In the long darkness that follows the upper-atmospheric detonation of America’s nuclear stockpile, millions of irradiated cannibals will worship pregnant sonic and I will be his prophet.

Steve: I will be an irradiated cannibal. 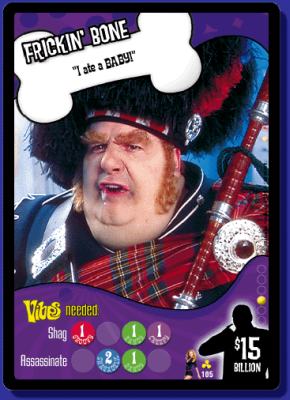 Steve: Which is better, ate the baby or get in mah belleh?

Zack: Can I go with a third choice?

Steve: The sound of an ancient whistle played during human sacrifices is a better joke?

Steve: What if it was being played by a baby that got in mah belleh?

Zack: As long as I was about to die being sacrificed, I could deal with it.

Steve: You know what they made that whistle out of, right? 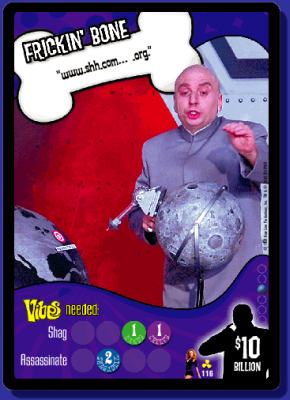 Zack: Fucking hell this is brutal.

Zack: And the worst part is how funny I thought this was at the time.

Zack: I can’t take much more of this, Steve.

Steve: Be strong. We can do this together. 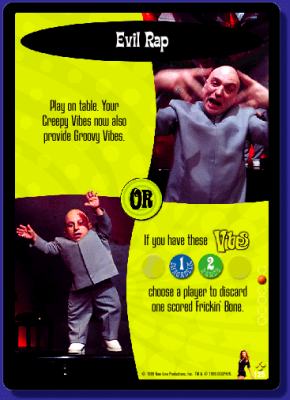 Zack: Doctor Evil rapping was the worst thing in the movie and they made it into a card.

Steve: I liked Austin Powers before we started this article.

Zack: Maybe that is the secret of this game.

Zack: It frees you from liking Austin Powers.

Steve: We are free.

Zack: You know what isn’t free?

Zack: I was going to say web hosting, but that will do too.

Zack: Thank you to all of our Patrons on Patreon. You make this possible.

Steve: Yes, thank you for making it possible for us to spend hours talking about Austin Powers the card game.