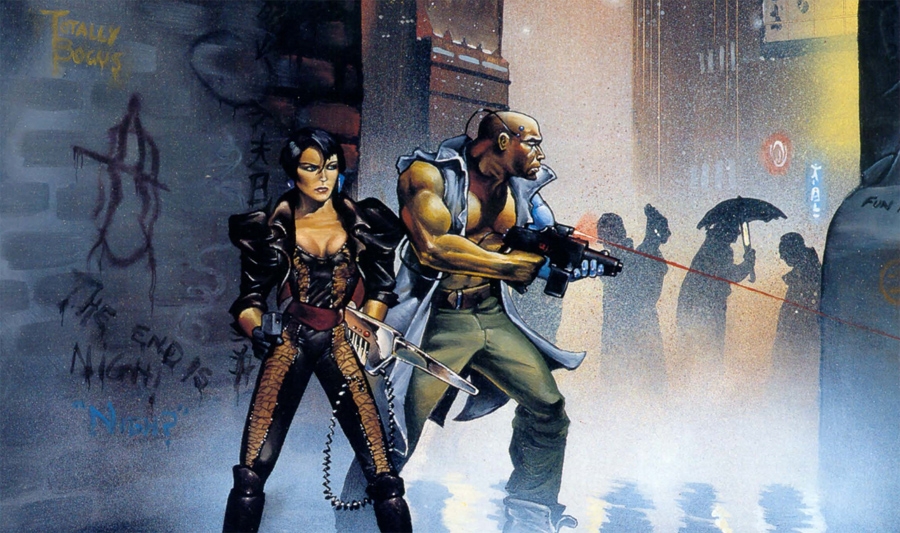 Cyberpunk 2020, the deadly and neon-washed RPG from publisher R. Talsorian, was always a niche gaming system. It had its heyday in the early nineties and has spent the last 25 years dwindling in popularity. Despite its relatively minor role in the pantheon of roleplaying games, it maintains a devoted following and managed to attract third-party publishers for various supplements. One of these, the still extant Atlas Games, released a number of adventure books of questionable quality. Today we take a look at the artwork from three: Night City Stories (a collection or GM resources and short adventures), The Osiris Chip (an adventure), and The Chrome Berets (the adventure with the best name imaginable). 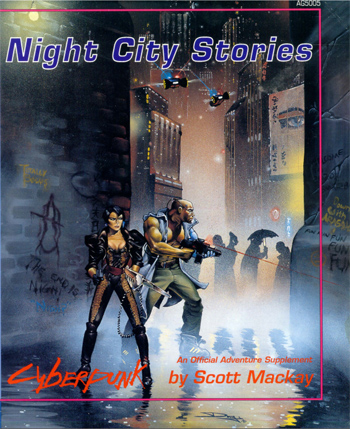 Zack: Do you think this is an homage to the famous Shadowrun book cover or a bad copy?

Steve: Bad? The only thing bad are these two asses, my friend. Pardon my French.

Zack: Instead of a sexy babe with magic on her hand and an elf decker you get the gritty real version. Which is a woman in an alley with a keytar.

Steve: I always appreciated Cyberpunk’s willingness to embrace bard as one of the legit character classes.

Zack: Still waiting for them to catch up with the original D&D class of “fighting man.”

Steve: In Cyberpunk we’re all fighting men. Fighting against the system. 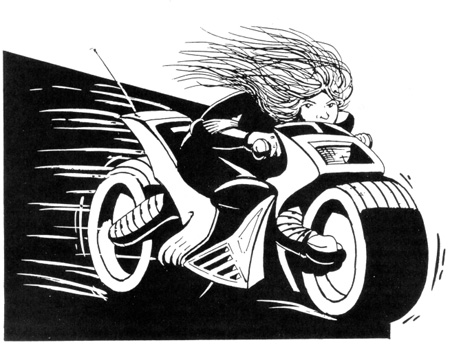 Steve: This is why nobody carries cooked spaghetti on their head on their motorcycle.

Zack: The one reason.

Steve: What’s your favorite detail? Mine is that the legs seem to merge into the motorcycle.

Zack: The little antenna on the back. It makes me think this is a tiny RC motorcycle and this is some Stuart Little gnome scenario.

Steve: You’re thinking of the Mouse and the Motorycle by Beverly Cleary.

Zack: Right, with the actual mouse on a toy motorycle whereas Stuart Little is a story about a mouse born to a woman.

Zack: Which is going to lead to some real difficult conversations between the husband and wife.

Steve: Yeah like “Why did I spend all night assembling that crib when I can put my mouse baby in a teacup?” 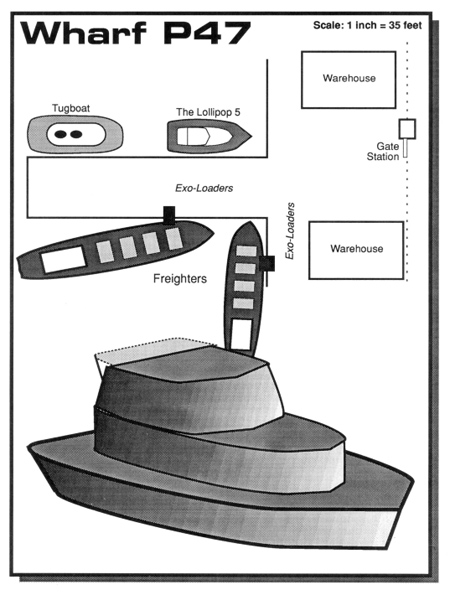 Zack: You know what could make our map a lot better?

Zack: A 3D view of a boat to show people what a boat is so they know about boats.

Steve: Rendered by a drunken computer.

Zack: “Welcome aboard the Lollipop 5,” says an orb as it clips through Gouraud-shaded wall.

Steve: You know the inside of the ship is that checkerboard pattern.

Zack: For sure it’s a whole vaporwave/Twin Peaks vibe in there with weird shadows drifting across chrome spheres and statues and drapes.

Steve: It definitely contains that water faucet with water flowing out but the faucet isn’t attached to anything.

Zack: Reflected in a chrome sphere. 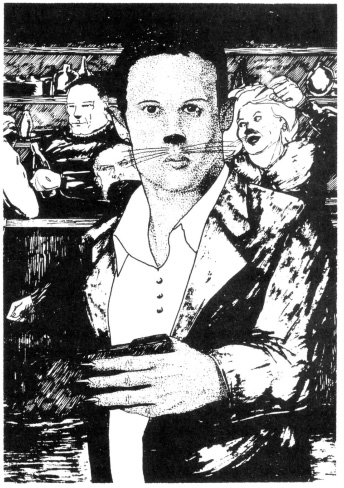 Zack: Cyberpunk is all neon, chrome, and whiskers.

Steve: Jack into the Meowtrix.

Steve: Okay now we have to stop. 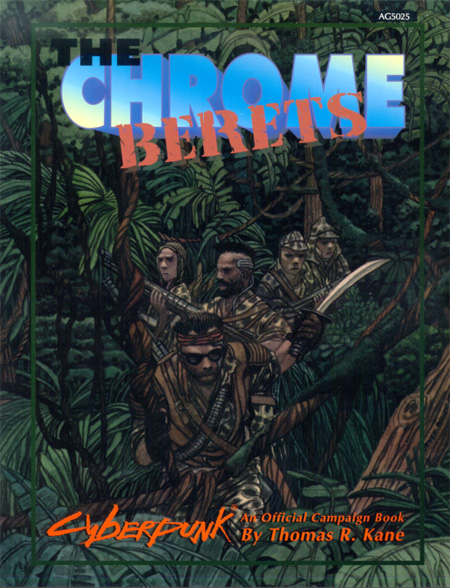 Zack: Fighting samurais from the sky, fearless punks who hack and die, Punks who kill when you pay, the brave punks of the Chrome Beret!

Steve: Is that the green beret song?

Zack: It’s the Chrome Beret song, number one on the charts in 2019.

Steve: Like a skillet on your head or something. 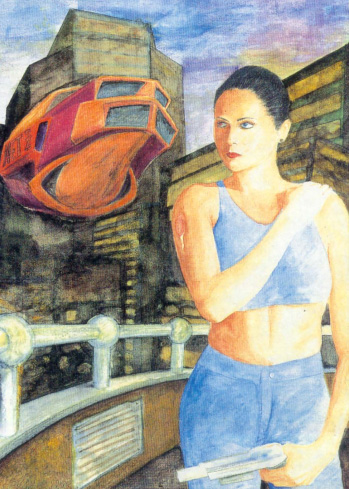 Steve: Pastel pencils or whatever they used for this do not seem like the right style for cyberpunk art.

Zack: Now I want to see cyberpunk pointilism art like Georges Seurat’s famous Midnight on the Streets of Chiba City.

Steve: He’s the picnic in the park guy, right?

Zack: Yes, two things that absolutely do not exist in cyberpunk.

Zack: They don’t even have Sundays in cyberpunk.

Steve: Picnics and parks exist but it would be like nutri bars in the heavily guarded Sector 5 corporate recreation zone.

Zack: Ah, the good old Sector 5 recreation zone. You know, I proposed to my wife under the statue of Elias Badmenko, the VP of Marketing. 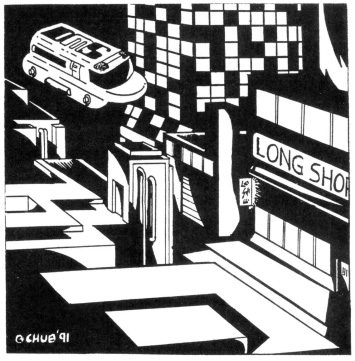 Zack: Everybody run! The Disney monorail has derailed!

Steve: I think that’s a flying ambulance. Which is oddly one of the constants in all cyberpunk settings.

Steve: I guess how else are you going to rescue a cyberpunk from the middle of a rock and roll concert?

Zack: LONG SHO… what do you think the sign says?

Steve: Exactly the sort of place where the world’s most powerful AI might hide. 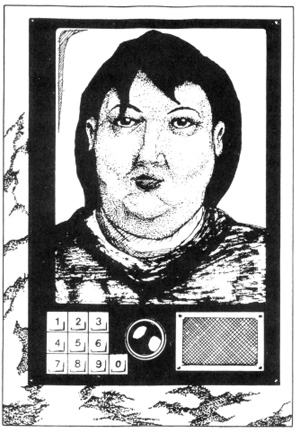 Zack: This is what cyberpunk reality is: a fat lady talking to you through some sort of video phone.

Steve: Are you sure that’s a lady?

Zack: Cyberpunk doesn’t have a lot of gender ambiguity. You are either Chris Isaak or Angelyne.

Steve: No way dude Liquid Sky that movie that is always mentioned as a “cyberpunk movie” was about like a transgender alien. Cyberpunk is all about blurring the line.

Zack: Ah, you know what, you’re right. I just remembered When Gravity Fails has a bunch of transgendered characters.

Steve: That’s the one that was turned into the Circuit’s Edge video game.

Zack: Yep. The video game that came out in 1990 and had like 50 different prostitutes in it. What a seedy game. 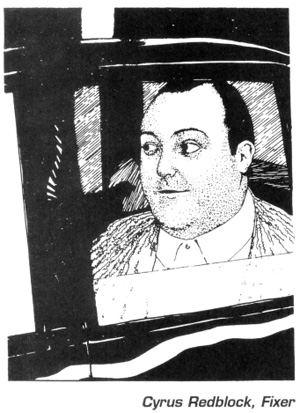 Zack: Now this is a man that can find a prostitute.

Zack: Also a man that can find a prostitute.

Steve: Now I want a cyberpunk movie where the protagonist is a streetwise Will Sasso just trying to get through his day.

Zack: Nothing goes right for Cyrus Redblock on the mean streets of Night City.

Steve: He’s going to have to rely on his wits to survive.

Zack: Walks into a drug deal for some designer brain drug disguised as Kenny Rogers.

Steve: They could have paid Will Sasso like 30 grand and made a much better Ghost in the Shell.

Zack: With enough wigs and tape for his eyes he could have played all of the characters. 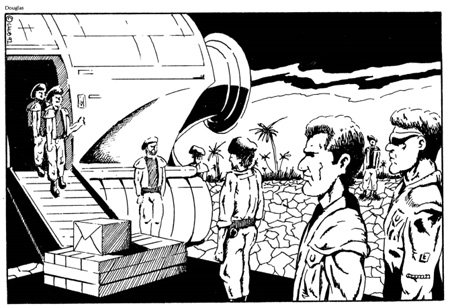 Steve: Rogue One totally ripped off the Chrome Berets!

Zack: “Yeah we have a delivery here for Cyber Lincoln. Somebody ordered 87 cases of Luna bars.”

Zack: “Over here! Four score and seven cases of energy and protein bars formulated for women but tasty as can be!”

Steve: What happens if a guy eats a Luna bar? 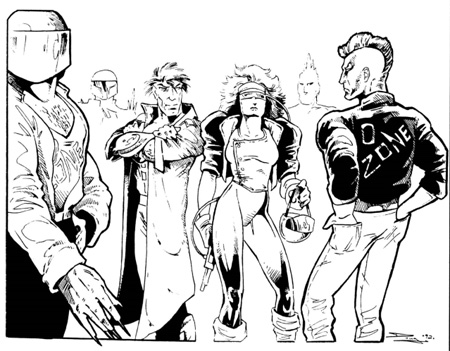 Zack: The O Zone was the name of my Orgone crystal website!

Zack: I never met any of the people face-to-face but there was a lady named Indigo_Mom who claimed to have given birth to the star child so the answer is yes for sure.

Zack: Orgone healing crystals can do a lot of things, you would be surprised.

Zack: Have you ever been attacked by a ghost?

Zack: That’s because of Orgone crystals. They keep away negative energy.

Steve: I don’t have any Orgone crsyals.

Zack: They exist and therefore hold attackers from the spirit world at bay. If they didn’t exist you would be regularly brutalized by specters.

Steve: I can’t argue with your logic on this one. 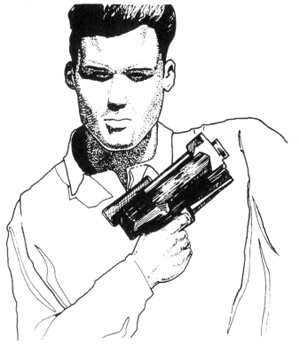 Zack: Chris Isaak! I told you!

Steve: This is basically my senior picture.

Steve: Only I had a Nerf gun.

Steve: They refused to use the picture of me with the gun in the yearbook and I am still mad about it. 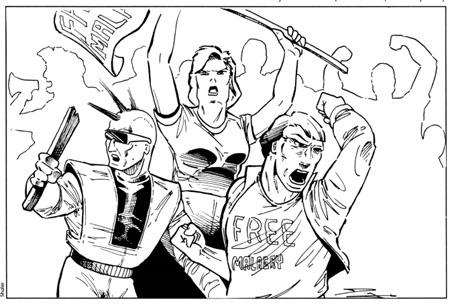 Zack: Antifa is at it again…

Zack: Antifa are basically the cyberpunks we deserve. No robot arms, no smart guns, just a bunch of college age kids beating up racists.

Steve: Both sides are bad. The guys with the swastikas and the netrunners hacking into their stormfront accounts.

Zack: Who would have guessed that actual cyberpunks would be identifying people from photos and trying to get them fired from their pizza delivery jobs.

Steve: Corporations and a nazi making pizzas are the same thing.

Zack: If there is pineapple on the pizza. 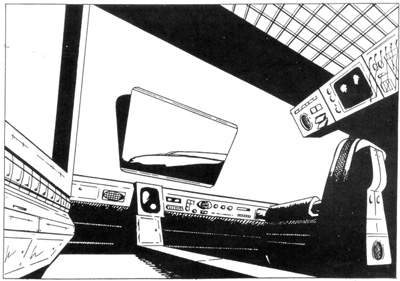 Steve: Cyberpunk interior design is like an extrapolation of those piles of TV screens you would see at a party in an 80s movie.

Zack: Or in your neighborhood Videodrome.

Steve: Yeah right. What if that and then also maybe like the Death Star control panel. This is what the future will be like.

Zack: Also computer keyboards that you plug into your head so you can imagine yourself typing things to someone else.

Zack: Thank you for reading our cyberpunk nonsense!

Zack: We still have a couple years left. Maybe they’ll turn out to be right!