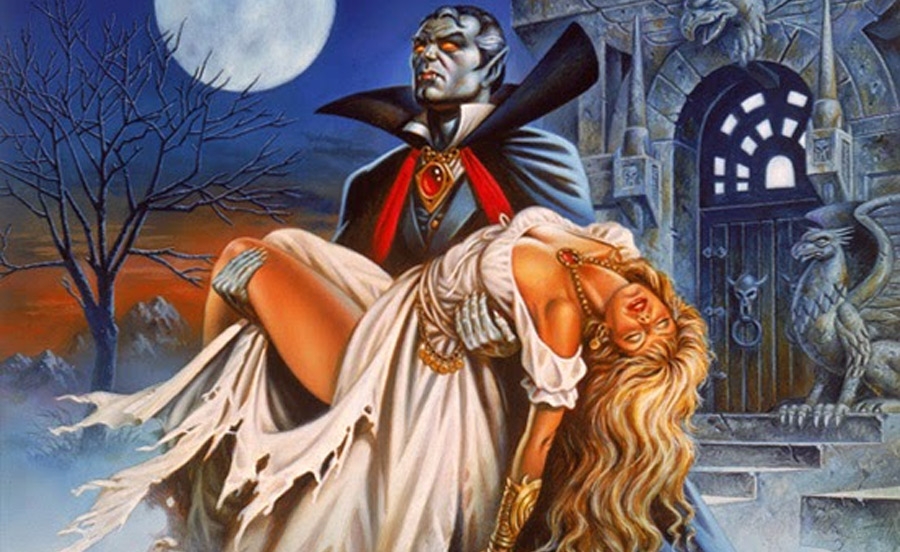 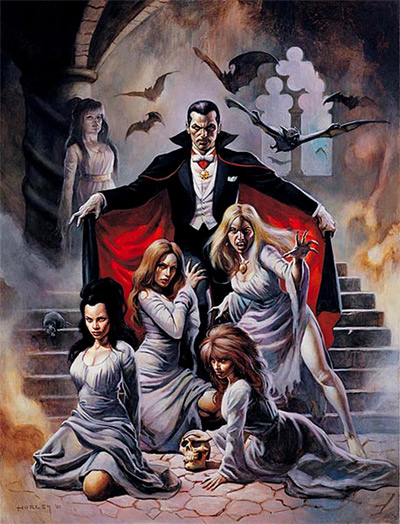 Zack: Strahd is dancing with Ireena. She has a distant look in her eyes and it is clear that she his under his mind
control. Her magic sword hangs loosely in her hands. “You live? How curious. I will correct my oversight.” He pushes Ireena away and comes at you.

Zack: Strahd is fast enough that I want you to actually roll initiative.

Zack: Strahd laughs and says, “I’m so glad you brought me my Ireena. It was why I sent for you.”

Steve: None of that means anything to Bane. He still thinks the guy who turned out to be dead or maybe the body in the woods was the person who wrote the letter.

Zack: Strahd launches at you to attack and trips up over a chair. He manages to stay on his feet, but his attack misses.

Steve: Good. I pull out the morningstar symbol of Hruggek and hold it up to ward off Strahd.

Zack: It does nothing. Hruggek is a chaotic evil god.

Steve: Yeah, but Bane is lawful good. The faith behind the holy symbol is like the battery powering it.

Zack: Strahd is not afraid of a bugbear holy symbol. He seems confused with what you’re even doing.

Steve: Alright, fine, let’s see how confused he is by my +3 knife. Gonna put that in his face. It’s a big, ugly knife and Bane only uses it when he’s really pissed off. With the strength and monk damage bonus it probably will do more than karate strikes.

Zack: Keep in mind, Olga drained you two levels, so you can only attack three times every two rounds. Also you are no longer Master of the West Wind you are apparently the Master of Dragons.

Steve: That sounds way more boss, but how does that work? Does my monk implant send a signal to the monk server and drop me down the leader board?

Zack: All of the monks know their standings instinctually. As soon as Olga chowed down on some levels Bane felt his spot in the standings slipping.

Steve: The only thing Bane cares about slipping now is this knife into Strahd’s stupid face.

Zack: AC 1. Do two attacks this round and one the next.

Zack: You punch some holes in Strahd’s arms, which he brings up to block your attacks. He quickly attacks again and this time he hits and deals 7 damage. Two more levels buddy.

Steve: AD&D vampires can go to hell. With those level drains costing me hit dice I am in some serious trouble.

Steve: Knife again. To his stupid face. “For Hruggek!”

Steve: Nice! Natural 20 critical. How are you doing critical?

Zack: You punch the knife into Strahd’s face and this time it strikes true. The badass vampire count is counting to 17 which is how many hitpoints he has left.

Steve: Twisting the knife in his face. “Tear head off vampire!”

Zack: Strahd scores another hit on you, dropping you two more levels to 4 and doing 4 damage.

Steve: I literally have one hitpoint left.

Zack: Two attacks to try to finish him off.

Steve: Triumphantly ripping off his head.

Zack: As you are tearing off the head of your vanquished foe, you feel a small prick on your neck.

Zack: You fall to the ground, dying. The last thing you see is the mocking look on the face of your former ally, Wendy. As if from a thousand miles away, you hear her say, “I told you I would betray you in part one.”

Zack: So you sacrificed your life to bring the cruel rule of Count Strahd to an end and free Ireena from his vampiric domination.

Steve: Bane Battler is at peace with the universe. He will travel forever in the beautiful fields of Pandemonium, at harmony with the head strewn caves of his god.

Zack: We hope you enjoyed our first WTF, D&D!? adventure on The Bad Guys Win. We have much more planned, so please consider supporting us financially through Patreon to make WTF, D&D a weekly article. We are at over $150 pledged which is 3/4ths of the way to our weekly article goal of $200 per month!

Steve: Also I have some boss ideas for Steve’s Dungeon. It’s gonna be so cool.