Chris A. Field is probably the most controversial figure of Indie RPGs. He is responsible for the perverse Black Tokyo setting and, most infamously, its Tournament of Rapists supplement. A supplement so offensive it has actually disappeared from e-sellers like DriveThru RPG. Shoveling rape themes into role playing games is one way to court controversy, but Chris is firing at every target he sees with his Otherverse America campaign setting. Available completely free as a PDF, this game works with the D20 OGL and D20 Modern and imagines a cyberpunk future in which an uneasy cold war has taken hold in the United States between factions that fought a three decade long civil war over abortion.The game takes contemporary culture wars and dials them to a thousand with liberal menstruation cults of genderfluid witches, cybernetic anti-abortion serial killers and future tech ranging from the expected to the bizarre. 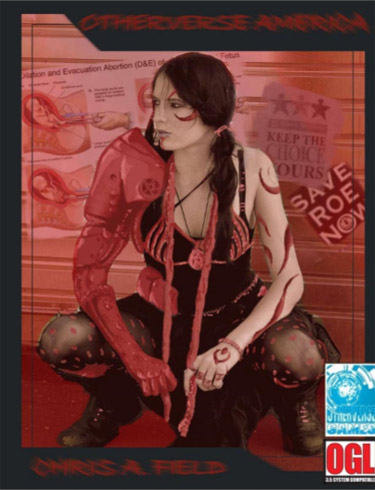 Zack: What are you most thankful for this year?

Steve: Stepdad bought a snowmobile so I might get to take it out if there’s snow.

Zack: I thought you hated your stepdad.

Steve: No, he hates me. There’s a difference. Last Thanksgiving he threw a pumpkin tureen of baked beans at me.

Steve: He claims it wasn’t at me and that he dropped them, which, how do you drop baked beans on the wall? I know the truth. I saw the look in his eyes right before the beans came at me.

Zack: What did you do to provoke him?

Steve: It was BS. Basically it was because I wouldn’t stop quoting LEGO Movie.

Steve: That’s no reason to get violent and ruin my mom’s favorite tureen.

Zack: I’d like to hear his side of things before I pass judgment.

Steve: Anyway, maybe we should stop avoiding the subject and talk about this abortion role playing game you made me read.