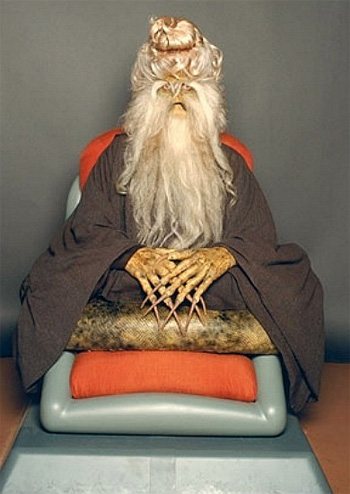 Zack: Now this guy I remembered purely from his reference photo that had him with this giant beard and manbun and this ridiculous grimace. So I found the scene he was in and it was one of those Jedi Council scenes, of course, because those scenes are like the Mos Eisley Cantina of the prequels.

Zack: And it turns out this guy is a snake man. If you look at that picture you will notice he has this whole rolled up snake body. So he’s a snake who can grow a beard. 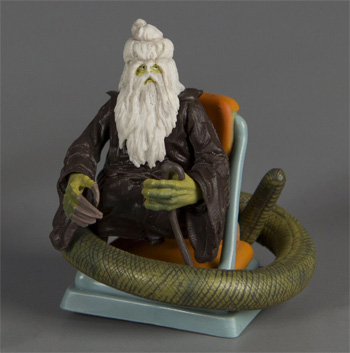 Zack: Right, the bearded snake is sitting on the same couch cushions. It’s an action figure of him sitting on his lazy ass at a meeting. That’s how useless this guy is.

Steve: You can play two scenarios with this action figure: Jedi Council meeting and surprise massacre of dudes sitting around on ottomans.

Steve: AKA the girl Yoda.

Zack: She was in Phantom Menace but then basically disappeared. She was on the Jedi Council too and just as worthless as all the rest. The Jedi Council, these mystics who can sense the entire universe of magical life energy, were at least as stupid as the cloners that made the clone army. Which was okay for those long neck aliens because their expertise was making clones. The Jedi Council was supposed to be all about wisdom.

Zack: She had the good sense to quit the Jedi Council before all the embarrassing fuck-ups in the later movies.