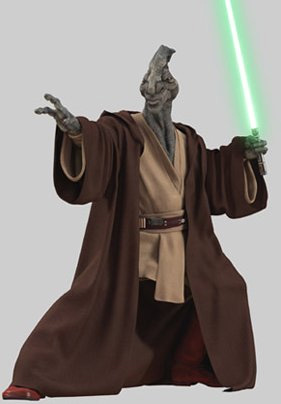 Zack: Okay, I had to look up this dip shit’s name, but I clearly remember his death from the movies.

Steve: Attack of the Clones, right?

Zack: Yeah, it’s when all the Jedi come swooping in to that colliseum where Padme’s shirt got ripped fighting a bug. Dooku is standing around watching it all happen and this goofy looking dinosaur Jedi runs up and tries to attack him. Dooku barely even notices, because Jango Fett shoots the Jedi repeatedly and makes him fall to his death.

Zack: That was Coleman Trebor.

Steve: What was he even thinking? If Jango Fett wasn’t there he just would have gotten murdered by Dooku.

Zack: Exactly. Yoda couldn’t kill Dooku in the middle of his AccuWeather Forecast, no way is Theodore Rex taking him on.