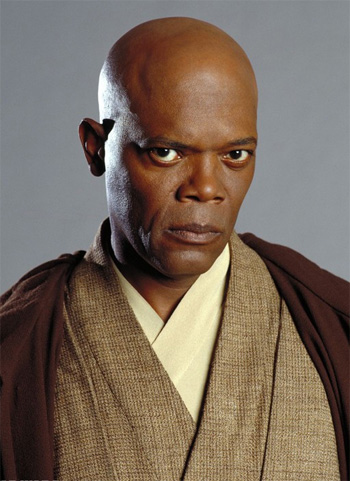 Zack: If the Jedi Council is worthless, then Mace Windu is King Worthless. He finally figures out some of what is happening, and his solution is to go to Palpatine with Kit Fisto and a couple other useless Jedi, who are all killed in seconds, and have a big sword fight in Palpatine’s green screen office.

Steve: That’s not the kicker though, dude. The kicker is that Windu fights Palpatine to a standstill and then Anakin walks in, but Windu and the Jedi Council have been huge dicks to Anakin throughout the entire series, so he’s best buds with Palpatine. But even then he doesn’t attack Mace Windu, he’s just like, “Yo, dude, come on we gotta arrest him. Due process.”

Steve: But Mace Windu is all, “Nope. This one time I am going to straight up execute this dude.” So Anakin cuts his hand off and then he gets force lightninged out a window.

Zack: UNLIMITED POWAAAAAAA!!! Palpatine basically force-jizzing all over Windu. It’s one of the most memorably lame deaths in a trilogy full of Jedis dying in the worst ways.

Zack: I’d rather be one of those Order 66 chumps who just get blasted in the back by a couple clone troopers.

Steve: The saddest part is I still remember how excited I was when I heard Samuel L. Jackson was going to be in these movies. I was like “Lucas is making some cool moves.”

Zack: Yeah, I love him, but he is so miscast in these movies. Placing Sam Jackson on the Jedi Council would be like inserting Yaddle into Pulp Fiction.

Zack: As I was typing it I knew it sounded amazing.

Steve: Which character would Yaddle be?

Steve: Please, somebody make one of those John Travolta GIFs with Yaddle.