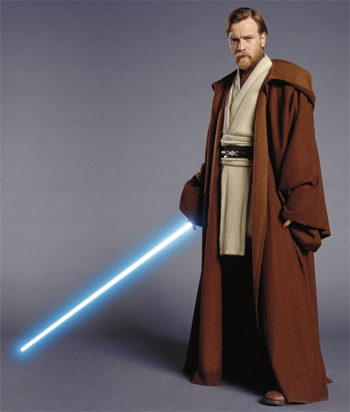 Steve: Okay, think about this: dude is given the task of basically raising the most powerful Jedi ever. He raises a sociopathic monster who is easily manipulated by the Sith and massacres all of the Jedi. But Anakin has kids, right, so where does this genius hide one of his kids? With FAMILY on Tatooine. But he doesn’t even go off through the galaxy to thwart evil, he sits down in a cave, doesn’t train Luke, doesn’t tell him crap. Just sits there feeling sorry for himself.

Zack: Those are all fair points. I mostly dislike Obi-Wan because of his closed-mindedness about deathsticks.

Steve: Well, my point is that he is totally not essential. What does he do? He’s a shitty foster dad, he solves a mystery way too late to do anything, he becomes a hermit, and then dies in a duel with the kid he raised.

Zack: He introduced Luke to the force.

Steve: He should have done that 15 years earlier. There is so much blood on his hands because he’s lazy and a shitty father figure.

Zack: But he figured out that an imposter was using the identity of Syfo-Diaz to make a clone army. Also, you can’t blame it all on Obi-Wan. If that dumbass Qui-Gon hadn’t kidnapped Anakin then maybe none of this would have happened.

Steve: We could have made a list of 100 Bad Jedis. My point was that you could take Obi-Wan out of these movies and there would be practically no difference. He’s window dressing.

Zack: At least he doesn’t get thrown out of a Temple of Nod like Mace Windu.

Steve: I’d rather have Syfo-Diaz.

Zack: Who would Syfo-Diaz be in Pulp Fiction?

Steve: Duh, he’s never seen in the movies, so obviously he would be the golden light in the briefcase.

Zack: I hope everyone enjoys and/or hates the new Star Wars movie. Whichever they want to happen.

Zack: We’ll be back before Christmas.

Steve: Oh, okay, well then I hope everyone has a bad Christmas.

Zack: You didn’t have to reverse it.

Steve: Make up your mind, dude!