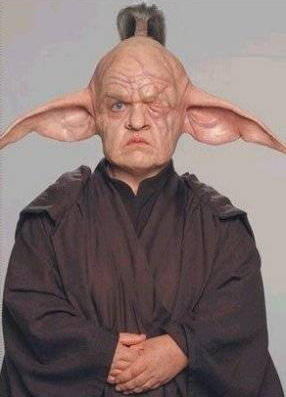 Zack: I’m just imagining this guy walking into his apartment where his girlfriend has a cat sitting on her lap and she’s reading a book and he’s like, “Guesss who is going to be the next Yodaaaa!?”

Steve: In my head, for some reason I thought this dude was a plant.

Steve: Well, okay, he looks sort of like a caricature of Yoda, but I don’t know, I think it’s because he sits around and he has that hair. I thought he was like a Pikmin.

Zack: I am with you this guy is not essential. He’s a background character. I’m not checking, but he probably has a figure and three episodes devoted to him in the Clone Wars TV show, but he is just there to look weird. But I can’t get on board with you that he looks like a plant. Not with him sitting next to Yoda.

Steve: Fair point. I thought Yoda was a plant for a long time too. I think because Swamp Thing came out around the same time as Return of the Jedi.

Zack: So you thought Yoda was a baby Swamp Thing?

Steve: I guess. I mean, I didn’t have it that coherently in my mind, but I just sort of took for granted Yoda was like a green potato or a mandrake or something.